I don't know how but Shane Gray of Graywolf Rods must have been reading my mind that I've had a smothering interest in bamboo in the back of my head for some time now.  He and I were talking the other day and he mentioned that he had two Pent bamboo spinning blanks and that he was thinking of building them up.  One for him and then also one for me.  What the WHAT?!?!

I love fly rods but have been on kind of a spin fish bender the last couple of years.  It's been fun to reacquaint myself with it after decades of not doing it.

Also, I get a lot of emails and DM's asking about different blanks, line weights, and lengths that maybe fall outside the norm of what we all see day to day in the Glass Geek world and often I suggest that they reach out to Shane since he always seems to have the weird and unusual in his stash somewhere.  It's always worth asking.  These vintage Pent bamboo blanks are a good example of this. 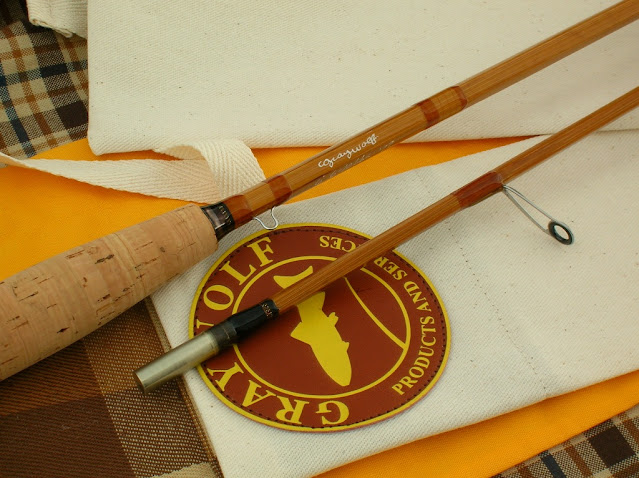 Shane wrote...  "Here's what I know about this spinning rod which is kind of limited since I picked up the blank with a bundle of others and just can't recall all the information.
The blank is a 6' 2-piece Pent bamboo (5-sided) and is rated for 6 to 10 pounds.  This vintage blank, along with several others, were picked up "In the String" meaning the blanks had been tapered and glued but the binding string was still on the blanks.

I sent these blanks along with a handful of others to Phil Terrano at Hudson Valley Rod Co. and he unstrung the blanks, sanded, cleaned, cut to length, and ferruled them.  He added a few coats of finish then sent them back to me.  I added the flor grade cork rings, a nice spinning reel seat and wrapped the Fuji K guides with antique gold silk, with a bit of black and gold at the cork check and ferrules.
This rod has plenty of power, should serve you well, and will last a lifetime." 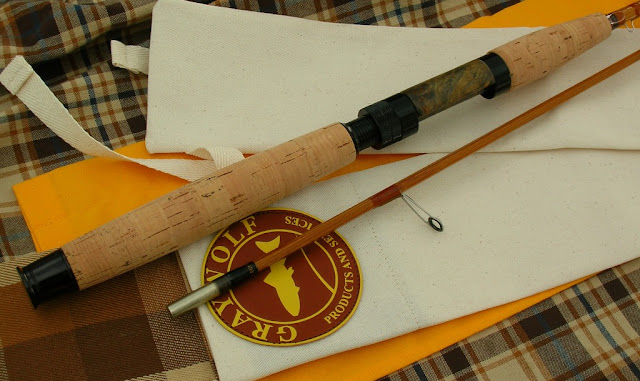 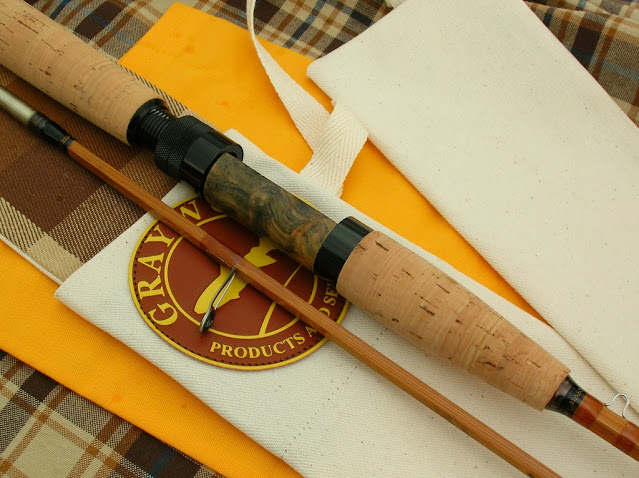 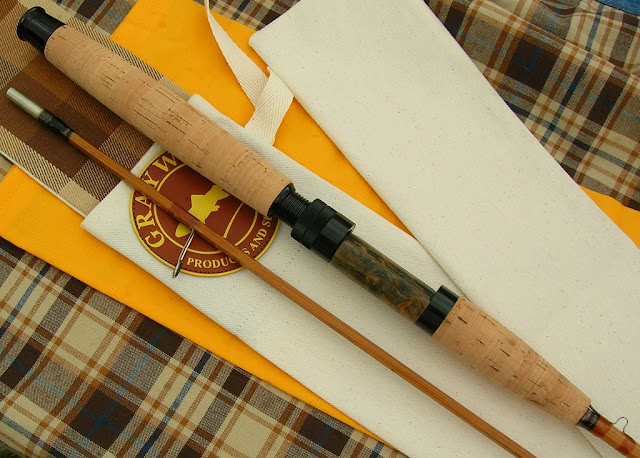 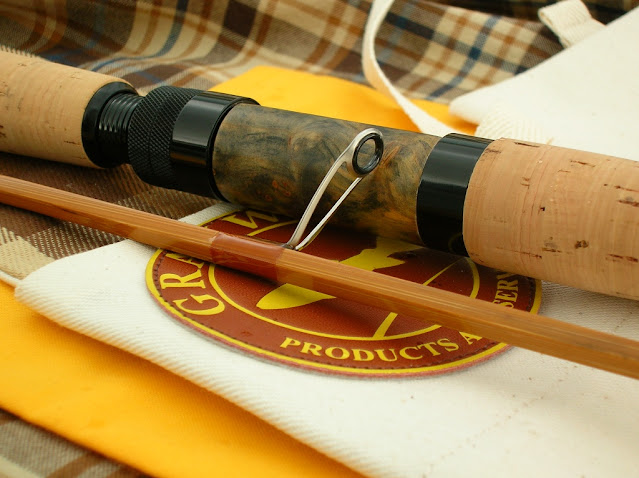 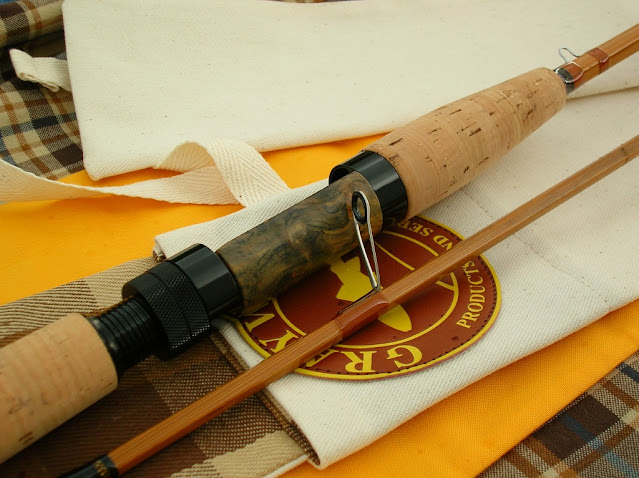 This spinning rod should be arriving on my doorstep soon and I am stoked as it'll be perfect for the largemouth bass in our family pond.  There's still time to use it this fall before things kinda turn off.

Check out the Graywolf Rods website, the For Sale page is stacked, and catch the latest shop news on Facebook and Instagram.
Posted by Cameron Mortenson at 6:00 AM No comments:

As Scott Hunter of Vedavoo and I are masterminding some new T.F.M. patched offerings, it's time to let what's in stock in the T.F.M. Store go with discounted prices to make way for what's coming next.

The slashed prices are only offered for what's in stock and I'll try to keep the online inventory updated as orders come in.

Thanks for checking it out and as always, I greatly appreciate the support.

As a side note, any gear items that Vedavoo offers can be made with a large or small Comrade or Retro Fly patch and you can contact Scott directly to get that order placed. 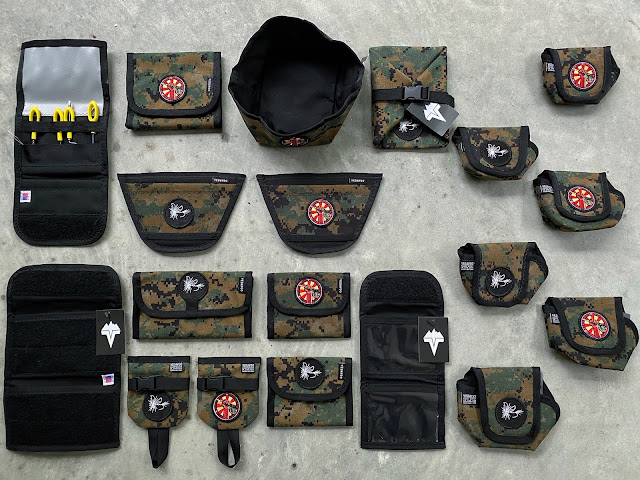 CRAZY HUGE FLY WALLET - COMRADE PATCH - $60
This can be fold in half or rolled and secured with hook and loop patches.  The dimensions of the fly patches is something like 12 inches by 10 inches.  It's HUGE. 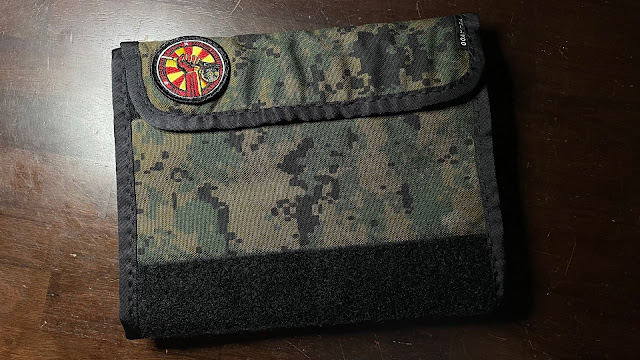 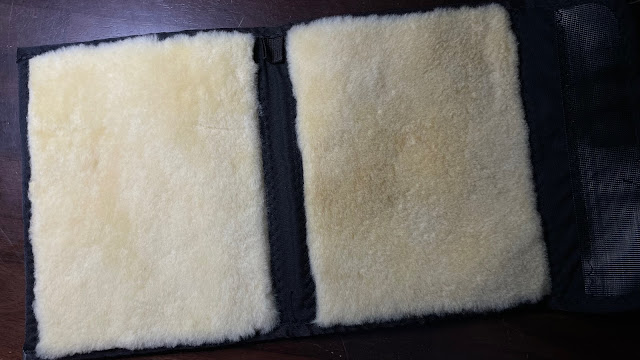 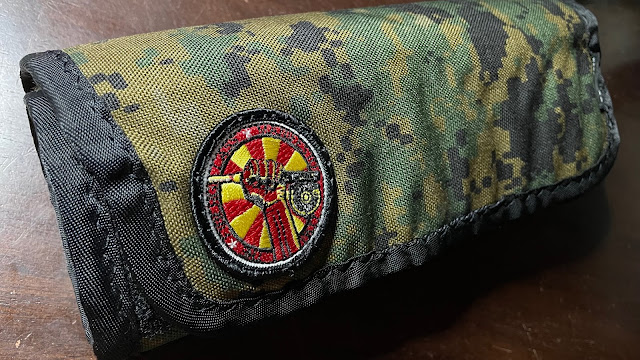 All prices include shipping in the CONUS and a few T.F.M. decals will be tossed in with each purchase.  We can hash out international shipping if anyone is interested.

I can take PayPal, Venmo, check, or credit card for payment.
Please email thefiberglassmanifesto@gmail.com with questions or to place an order.
Posted by Cameron Mortenson at 5:00 AM 1 comment:

I get a kick out of the boys from Fly Fish Food and they recently made the trek across country to the "Orvis Mothership" for a few days of hang and learn.  There's a lot of secret sauce all over the place at the Orvis Rod Factory and you'll see some blurred out footage in this video of their visit.  It's a great inside look on how the "Made in U.S.A." fly rods are made from start to finish.  I've done the tour several times and it's impressive the amount of technology that goes into building a fly rod.

Posted by Cameron Mortenson at 6:00 AM No comments:

I'm working on several upcoming gear features that will include the latest generation of the Turtlebox speaker but in the meantime, if you've been on the fence about getting one, pull the trigger and you might want in on the limited "The Delta Edition" speaker that went up on the website last week.
Not familiar with Turtlebox?  These speakers are LOUD, waterproof, can withstand some abuse, and last for hours and hours.  You can pair two together for true right-left stereo sound. 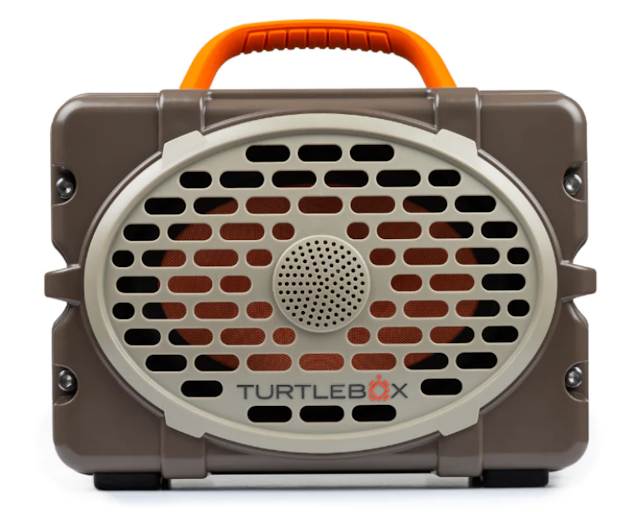 When "The Delta Edition" sell out, they are gone.  Get orders today and it should ship in the next couple of weeks.

Visit the Turtlebox to check out the Gen 2 Speakers, "The Delta Edition", and the Collegiate speakers too.
Posted by Cameron Mortenson at 5:30 AM No comments:

The American Museum of Fly Fishing continues their Fishing the Collection film series with the angler spending some time with a bamboo 1981 G.H. Howell 4-weight.  Classy.

Visit the American Muesum of Fly FIshing website and consider supporting their work of preserving the history and heritage of fly fishing with your membership.

Posted by Cameron Mortenson at 5:00 AM No comments:

How to Age Gracefully

The other day I received an email from filmmaker Corey Ogilvie and noticed that he had the same last name as the lead in his short film.  I wanted to know more about his relationship with Courtney Ogilvie and he was gracious in providing some backstory that  you can read below.

Corey wrote...  "My father Courtney Ogilvie is my hero because he stopped his construction career to do what he loves in life: fly fishing.

This was very risky and against all norms for family men in their late forties.  But he didn't care, he made the sacrifices and followed his heart.  Now in his 70's, his obsession has grown and led to his Nile Creek Fly Shop on Vancouver Island, Canada where he sells Vision Fly Fishing products.

In one day he can easily fish a river, lake and ocean, and I wanted to capture him navigating this natural tapestry as best I could.  We filmed in Qualicum Beach, British Columbia area.  This is where I grew up with my dad.  I knew all the locations very well, so this made production a lot easier on everyone.

Ultimately, this video is an exploration of ageism in our society, and how we can fight to break the norms people expect of us, all the way to the end."

This film really hits home for me as my 76 year old father was laid up in the hospital last week for a few days with some yet to be diagnosed severe pains.  While there, he realized that he needs to be doing the things that he really enjoys more often.  For him that is golf and instead of just once or twice a week, he's planning on getting out much more than that which I am glad for.  Live it up.  Every day.

Posted by Cameron Mortenson at 6:00 AM No comments:

406 FLY LINES - When THIS Fly Line Made All the Difference

The other day I make a quick overnight trip up to hang out with Dave Fason and we spent the afternoon with guide Patrick Hayes on a local lake in Greensboro, North Carolina.  They have been figuring this lake together for the carp that more or less crawl through the muddy flats in inches of water.
I was loading up my Sea Run Case Riffle Daily QR Travel Case, trying to figure out a good line to match with the Superfine Glass six-weight and eight-weight fly rods that I was taking as Dave mentioned that the fish were both leader and fly line shy.  Typically when I get to heavier line weight fly rods, the fly lines that I use are big bug capable with large forward heads that don't always land on the water with too much subtly. 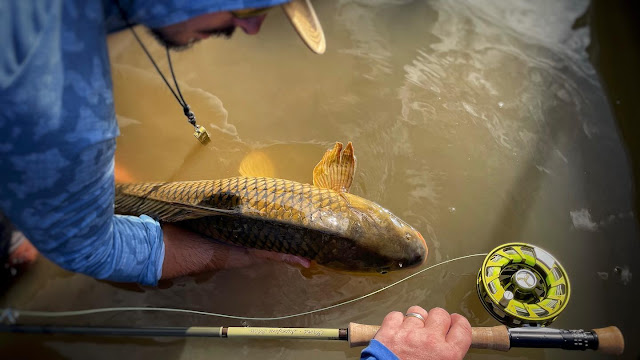 As I was sorting through the large container that I have all my fly lines organized in, I grabbed the stack of 406 Fly Lines and picked out the six and eight-weight weight forward fly lines, thinking "These should work just fine...".
And they did.  The fly line worked great on the Superfine Glass 8-weight laying down on the water softly.  The carp that you see above was working it's way through maybe four or five inches of water and I cast a couple of feet ahead to hopefully intersect it's path.  It crawled forward.  Slowly.  Was it going to turn?  Forward again and closer to the fly.  I twitched the black bugger just a inch and the carp moved forward to inhale it.  Moments later we slid it into the net.
I've long been impressed with the 406 Fly Lines but mostly fished them in the "trout weights".  I was glad to have the heavier line weights in my stash.  The 406 Fly Lines are made at the Scientific Anglers factory to Tom Brodhead's specifications using heritage tapers as his guide.  These fly lines work great on glass (and have quite the following in the bamboo crowd too) and really should be considered if you're in need of a new line.
Visit the 406 Fly Lines website to check out their weight forward and double taper offerings.  You can learn more about their story on the website too.
P.S.  If you find yourself in the Greensboro area and want to fish, look Patrick Hayes Fly Fishing up.
Posted by Cameron Mortenson at 5:30 AM No comments: