A Belikin With Mr. Lincoln Westby

The alarm clock on my iPhone went off at 4:00 a.m. and I tilted the driver's seat forward, stretched and gathered up a backpack, duffel and three fly rods bundled together to carry on the flight from Atlanta to Belize City.  I had arrived at the airport after midnight and had gotten a few hours of somewhat restful sleep parked in the darkest corner that I could find in the airport parking lot with the noise of jet planes taking off and touching down while I snoozed.

Six hours and three flights later I was standing at the tiny airport in Dangriga waiting for the shuttle to Hopkins.  Scott Thompson of Blue Horizon Belize and Dave Student of Umpqua had arrived the day before and rode along with Wassan who loaded my bags and drove us, along with a newly married and fresh faced couple from the St. Louis, to Hopkins Bay Resort where we'd be for the next couple of days.

On the forty-five minute drive from Dangriga to Hopkins, we passed through town, homes up on stilts, fenced pastures, fruit orchards and jungle before passing into town again.  This was as much inland as I'd seen of southern Belize and enjoyed taking it all from the backseat of the air conditioned shuttle van. 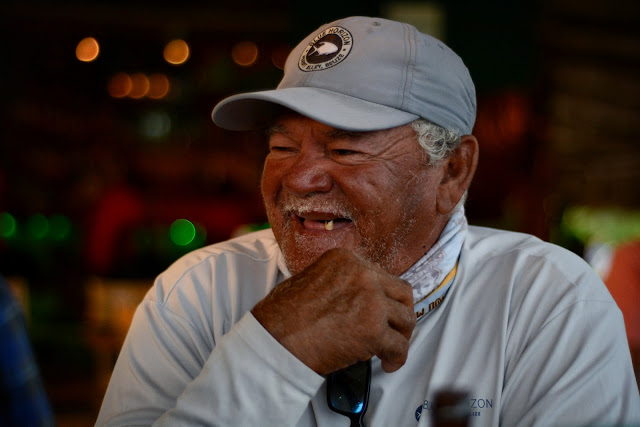 After I settled into the upstairs bedroom of our beach house at Hopkins Bay Resort, Scott suggested that we ask Wassan to drive us through Hopkins to the other end of town to show us around.  We piled into Wassan's small sedan that doubles as a taxi car and after a slow drive through town, ended up at The Curve Bar which overlooks the Sittee River and the marina.  We watched as the occasional panga moved up and down the river.  One went by with a couple of anglers on the bench seat with a guide at the back of the boat who likely coming back from a day on the nearby flats, another panga with several local fisherman and still other pangas with sun burnt tourists returning from different water based excursions.

As afternoon turned to evening, two pangas traveling after each other rounded the corner of the river and we saw that Lincoln Westby and Ransom Nunez at the wheel of each boat as they eased their way into the marina to dock for the night.  After gassing and prepping their pangas for trips the next day, they both came up bar and sat down at the table to enjoy a cold Belikin and a few laughs before heading home to their families.

The next hour or so was spent with Lincoln holding court between sips from his beer bottle.  He recounted stories from the flats both old and new, talked permit behavior, laughed about some of the crazy things that had happened in his boat and excitedly told us that he had been busy guiding lately and had worked thirty of the last thirty-three days.  He was about to start five days in a row with a new group of anglers that had arrived in Hopkins that day and couldn't be happier to be busy.

Who knows how many days he worked beyond those but at 77 years old Lincoln Westby is a downright badass for his vitality and strength.  He's stands stout but straight with sharp eyes that still see permit tails and nervous water from afar.  His large calloused hands which have pushed a panga across countless flats with a long handmade wooden pole.  He has an unbelievable energy about him, an infectious laugh and he's so damn excited about getting out on water each day.  It's no wonder the respect that those in Belize have for him as they talk of "Mr. Lincoln", "Uncle Lincoln" or "Papa Lincoln" depending on their relationship to him as fellow guide, friend or family.

I have tremendous respect for Lincoln Westby and have been fortunate to have spent time with him both on the water and off.  His long standing ideas on permit, conservation and how guides and anglers should act on the flats make sense.  It's no wonder he and his clients have caught over 2,000 permit and counting.

Southern Belize is a very special place and Lincoln Westby has plans for the future in educating the next generation of flats guides, teaching anglers about permit from the back of his panga and his own island, Blue Horizon Belize, will be reborn again as a fly fishing lodge after several decades of closure.  I've walked this island with Lincoln Westby on my first visit several years ago and it will be exciting to see it re-open in the coming months.

I spent the time at The Curve Bar listening to Lincoln while snapping images on my Nikon with the 50mm lens set at f/1.8 that I hope capture his spirit and energy as we saw it.  Spending time with Lincoln is always a very neat experience and this was a great way to spend my first evening back in Belize. 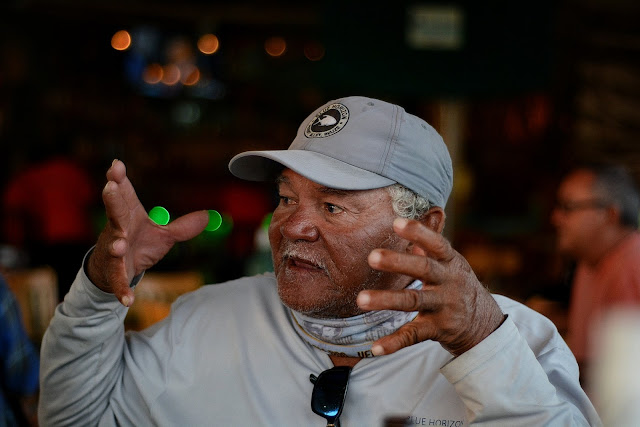 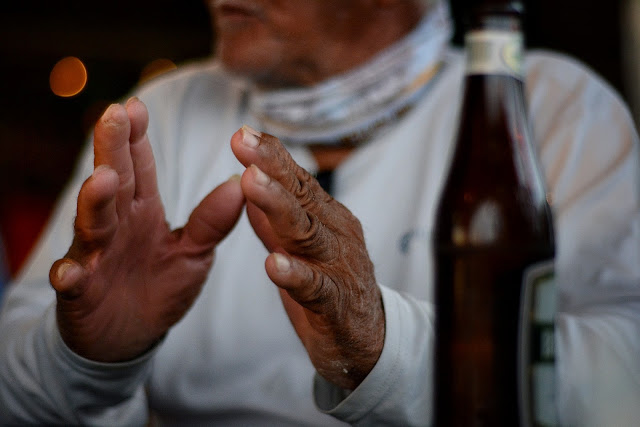 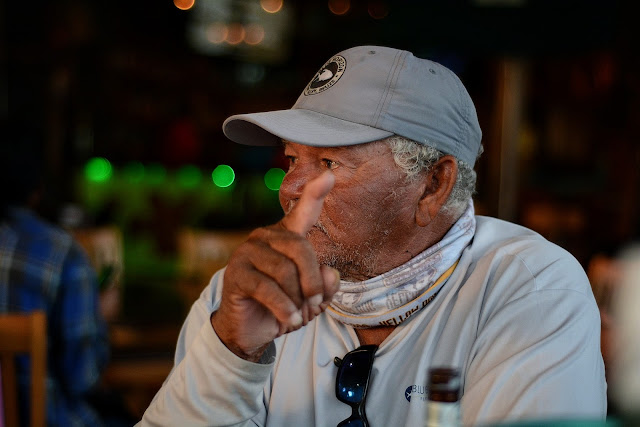 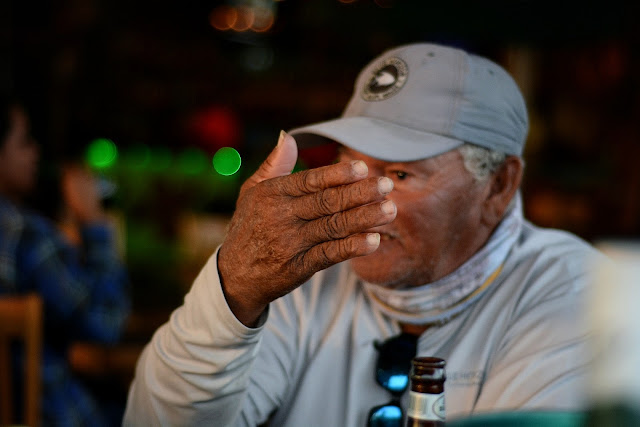 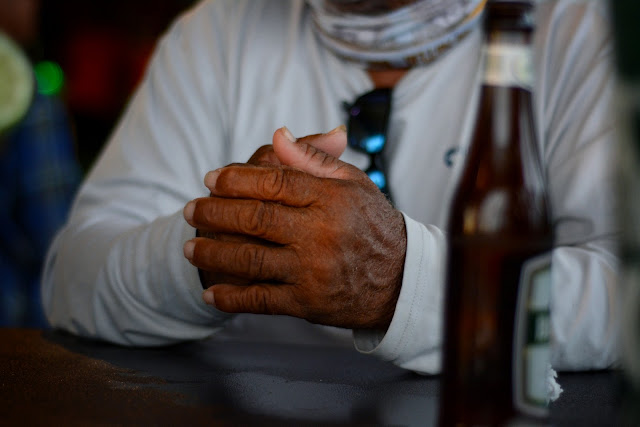 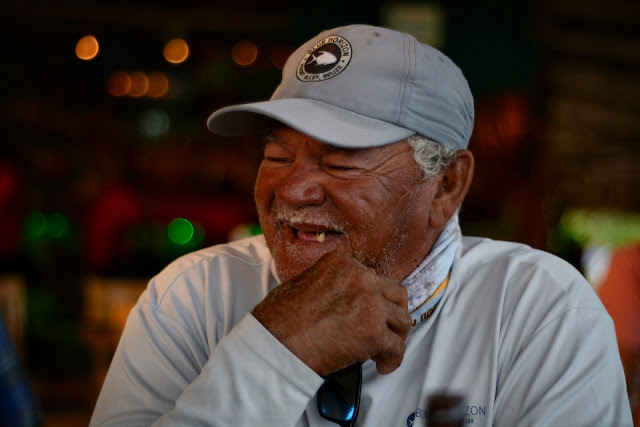 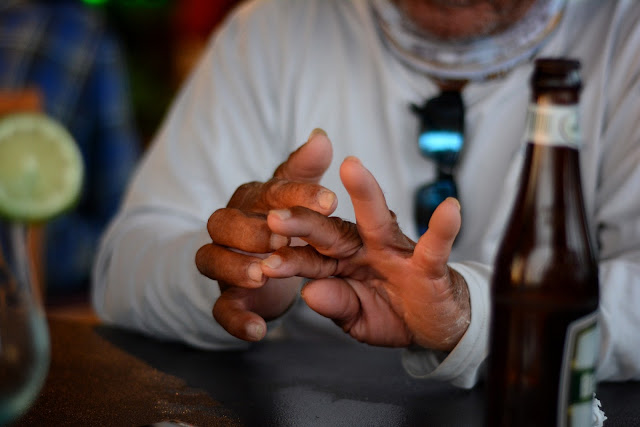 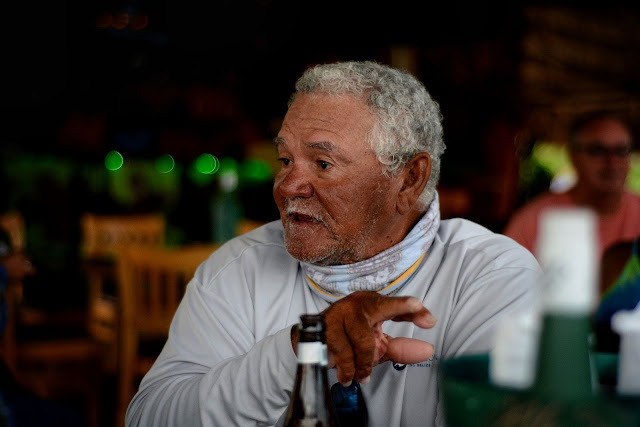 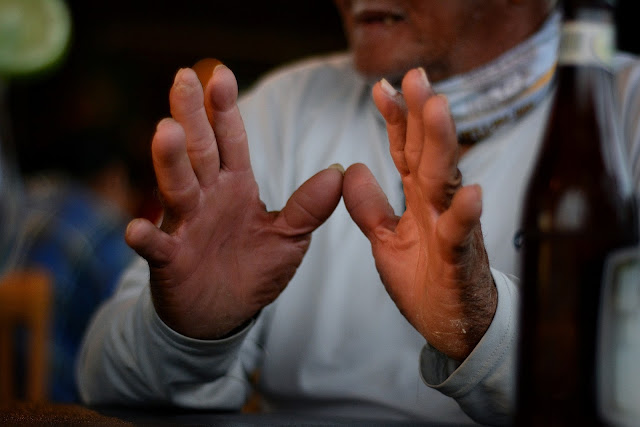 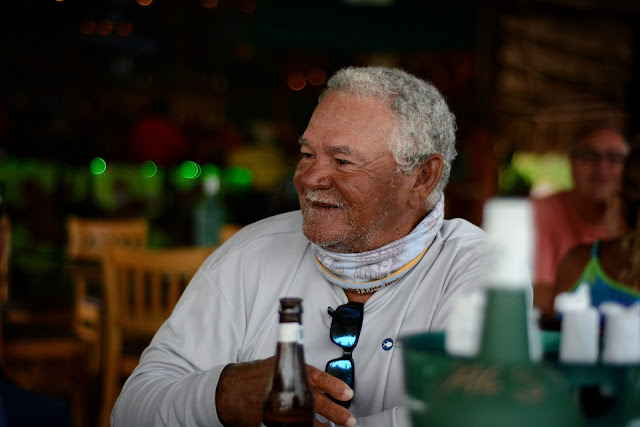 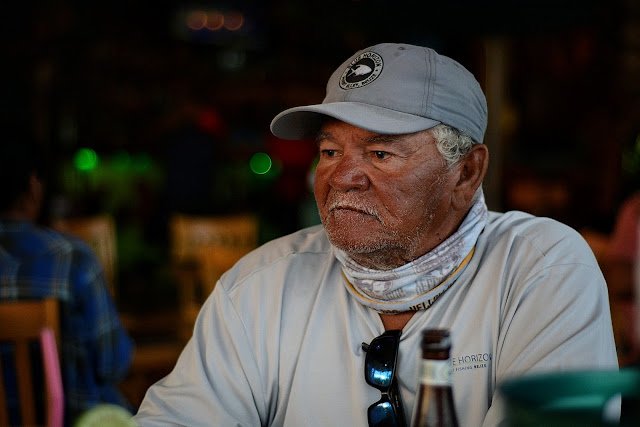 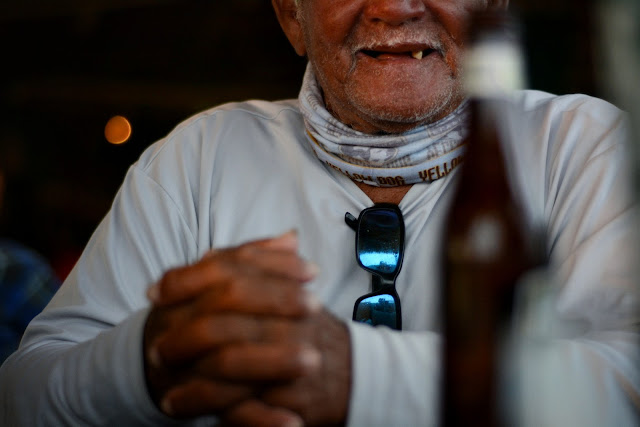 If you haven't read about my first trip to southern Belize with Lincoln Westby and Ransom Nunez of Blue Horizon Belize from a couple of years ago, please take a few minutes and visit these past T.F.M. posts HERE and HERE.

Are you interested in planning a trip to spend some time with Lincoln Westby and the other excellent Blue Horizon Belize guides?  Send an email to thefiberglassmanifesto@gmail.com and we can discuss putting a trip together staying at one of seven Muy'Ono resorts in southern Belize.
Posted by Cameron Mortenson at 6:00 AM