Thirteen years ago when our daughter Hadley was born, I wanted to celebrate her birth and purchased a box of Arturo Fuente Hemingway Short Story to hand out cigars to friends.  It didn't take too long before the twenty-five cigars were gone and the box was filled with mementos of Hadley's birth.  This little cigar box was placed in my wife's hope chest where it likely would have stayed if it had not been for connecting with Kristopher Jensen about a year ago.  I was selling a few fiberglass fly rods and he inquired about one of them along with mentioning that he had seen a video posted of Hadley playing her ukulele.  That email started a back and forth conversation about his hobby of building cigar box guitars and I asked if he could build up a ukulele with the Hemingway Short Story box in trade for the fly rod that he had inquired about.

Fast forward a few months and a slender box arrived with the most beautiful thing inside.  It might be a somewhat unusually shaped cigar box ukulele that doesn't make a lot of noise when picked or strummed  but this steel stringed beauty is certainly something special.  This little cigar box was already full of memories but now lives on in Hadley's hands making sweet music. 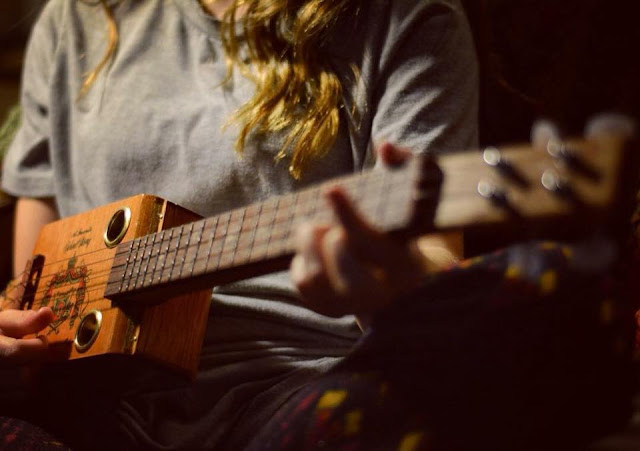 Kristopher wrote...  "I didn’t know what to expect when I first emailed Cameron about swapping a cigar box guitar for a fiberglass fly rod that he had listed for sale.  After a couple emails back and forth, a deal had been struck and I agreed to build a custom, cigar box ukulele using the box from cigars that he purchased when his daughter was born.  He also said that he wanted to document the build on The Fiberglass Manifesto.  A custom build from a special box, pictures documenting the process and a write up to tie it all together.  No pressure there.  So, while I waited for the box to arrive, I cleaned my shop so it wouldn’t look like such a disaster in the pictures and started thinking about what direction to go with the build and the article for the website.  Honestly, the article turned out to be the hard part as it only took me about six months longer to write this than it did to build the ukulele.

I thought about a how-to article, walking step-by-step through the build process.  I thought about discussing the history of cigar box guitars and homemade instruments.  Ultimately, I decided that all of the detail and history was available at the tip of your fingers as you just need to type “cigar box guitar” into your favorite search engine and settle in for information overload.  Eliminating the how-to and history aspects pretty much left me with talking about why I build cigar box guitars.  What leads a generally unmusical, late 30's guy with a wife, four kids, a crazy dog, two jobs, a bunch of other hobbies and a pretty serious fishing problem to spend the winter turning empty cigar boxes into musical instruments?

I’ve been a tinkerer ever since I was a kid.  I could never leave well enough alone and have always had this urge to take things apart, change them, make them “better” or different or more personalized. My wife jokes that it would be cheaper if I just bought the thing I want than it ends up being after I’ve acquired all the pieces and parts to make it myself. I’ve come to the conclusion that it isn’t the new piece of gear that I want, but rather the experience of studying, learning, making the preliminary attempts and finally seeing a finished product that is unique, different and special in its own way.

A couple years ago, completely out of the blue, I got the urge to learn to play the guitar.  None of the teach yourself guitar info I found seemed to be what I was looking for, but one night I came across a guy wailing the guts out of a homemade, three string cigar box guitar and was immediately hooked. Here was something that not only scratched my guitar playing itch but was a project to dive into as well.  The first attempt was made from a piece of bamboo flooring stuck through a box just to see if I could make a something that resembled a guitar.   It was pretty crude with a piece of threaded rod for a bridge and fret markers burned into the neck with a soldering iron, but it had this great bluesy sound. I made a slide from a scrap of pipe and played "Bad to the Bone" (the easiest slide guitar song ever) about a million times.  That first guitar quickly led to a second and third.  Since the original guitar, I’ve learned a lot about frets, scale length, string gauges and a whole list of other things that makes a guitar a guitar.  Each instrument I build now is an attempt to blend that original rattling, handmade imperfection with the qualities and playability of a “real” guitar.  I’ve lost track of how many guitars I’ve built, but with each one I learn something new that makes the next one some small degree better.

I get the same charge out of fishing as I do from building cigar box guitars (and all the other random projects that are on my work bench at any given time).  I love the detail, the desire to know more and the seemingly endless ways you can combine all the variables to get a different result. The moment when it all comes together and you feel that tug on the end of your line or hear the first sounds from what used to be a cigar box is pretty sweet too." 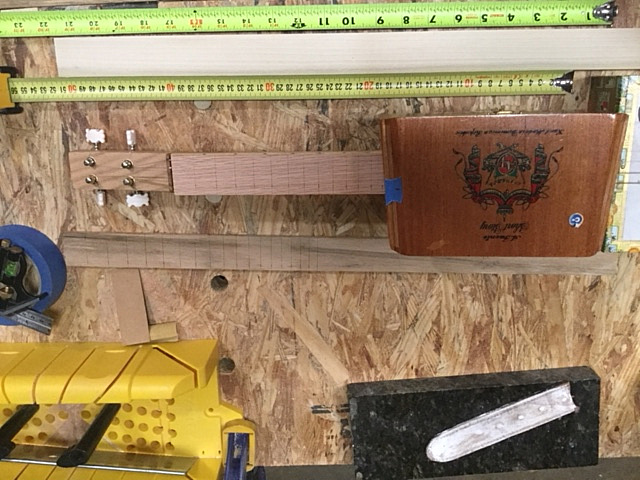 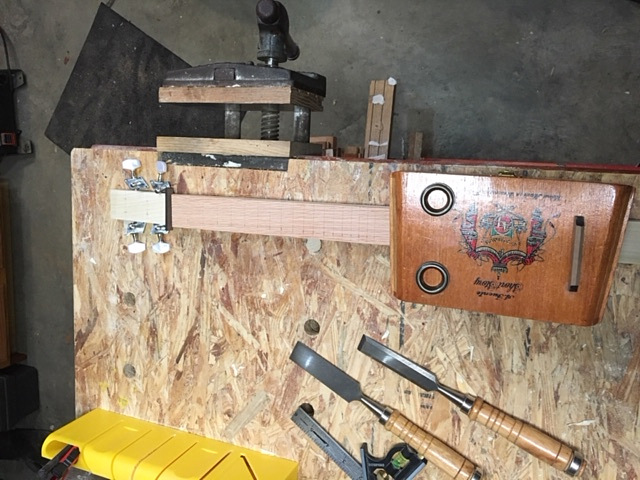 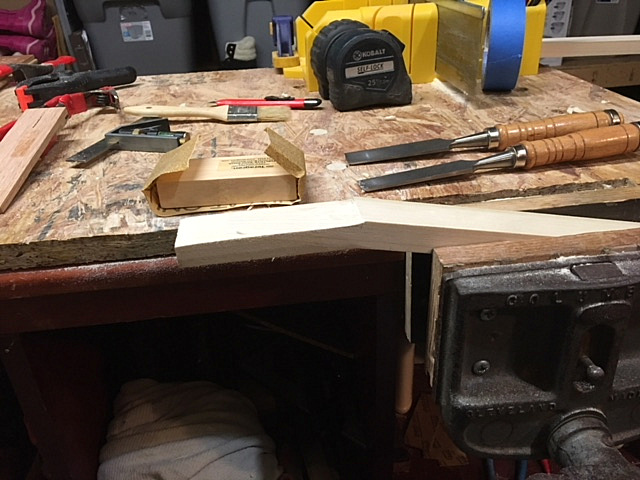 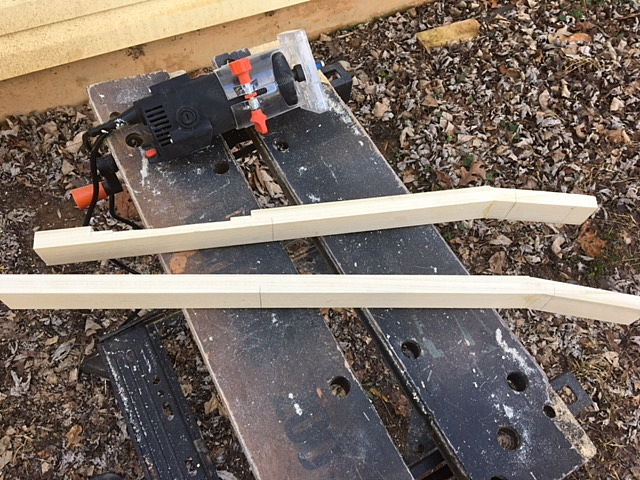 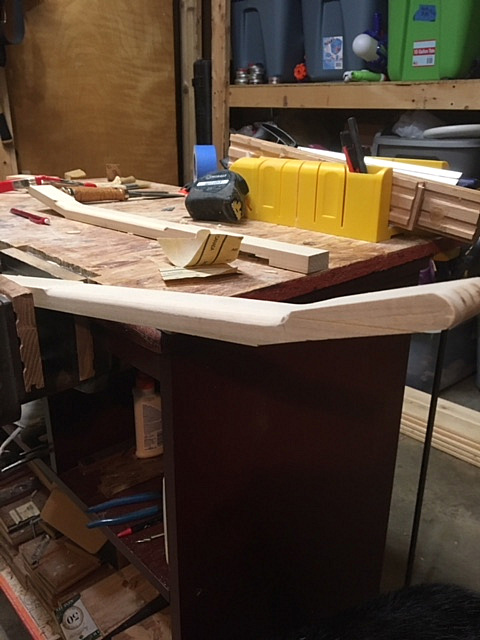 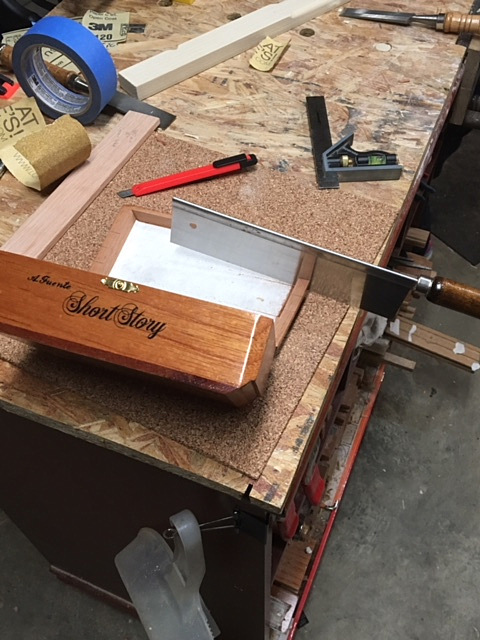 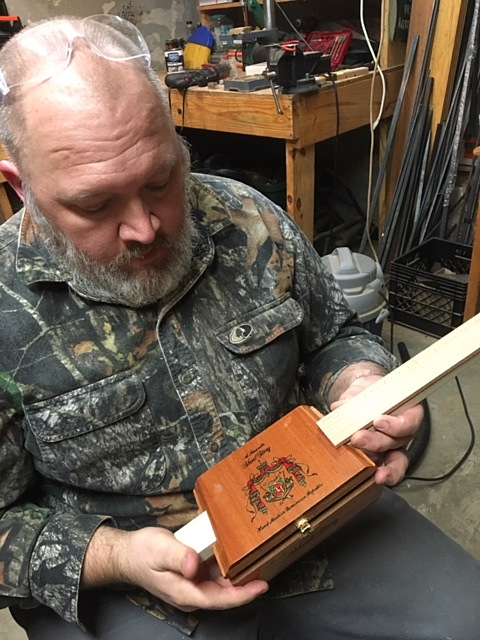 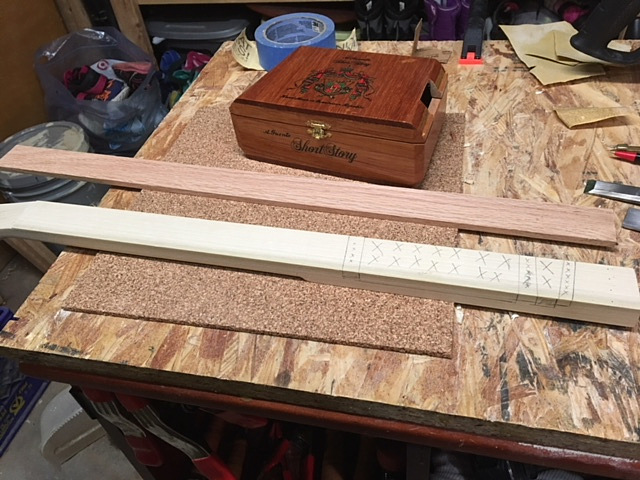 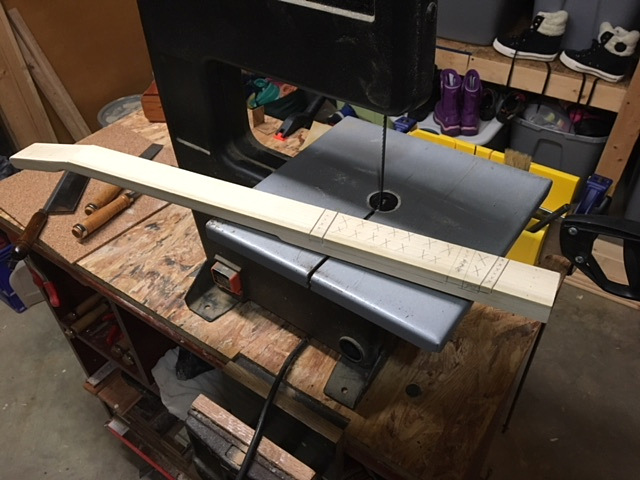 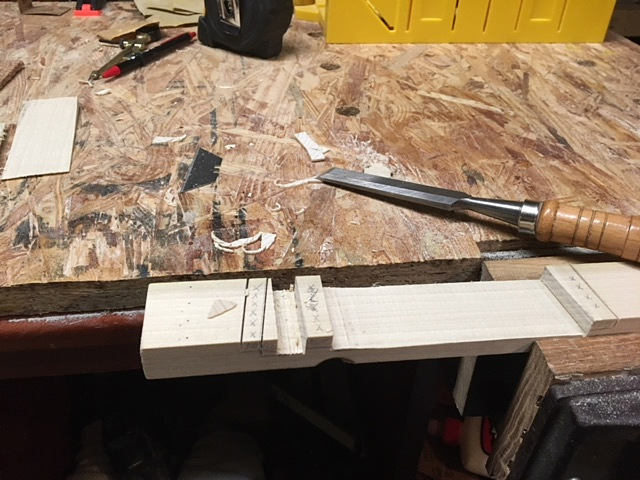 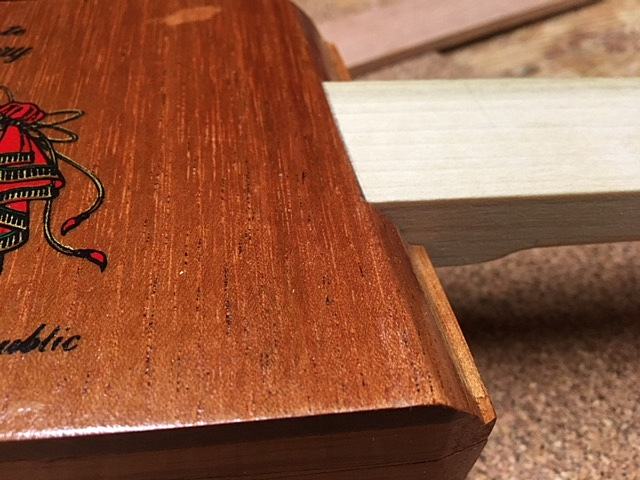 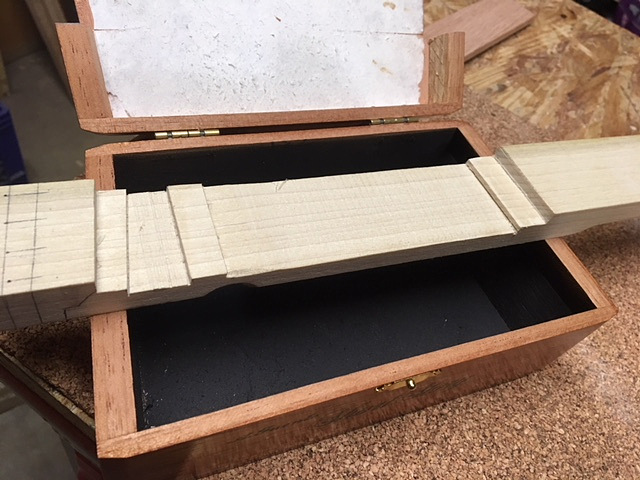 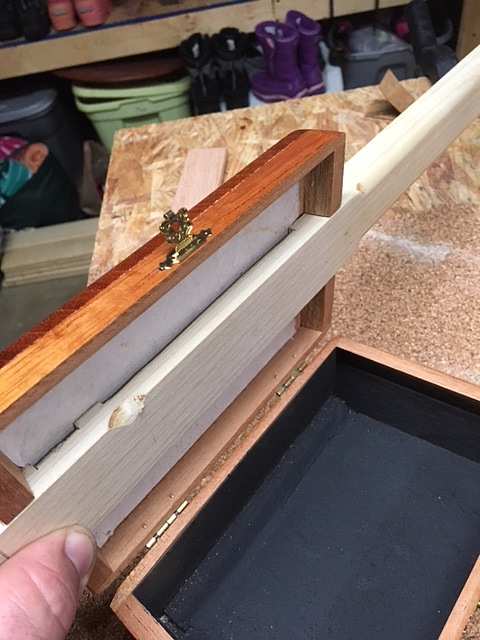 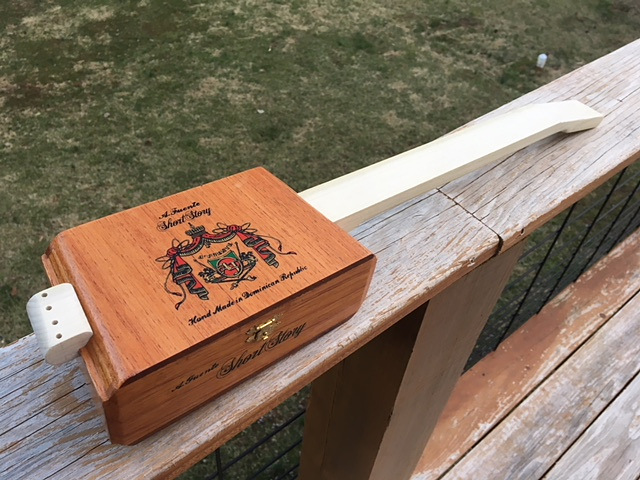 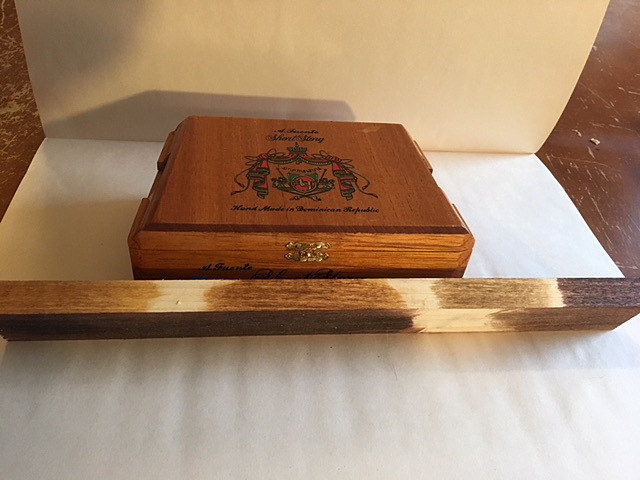 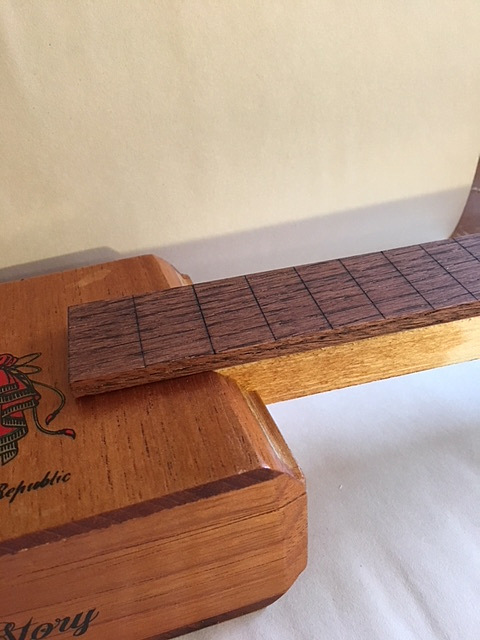 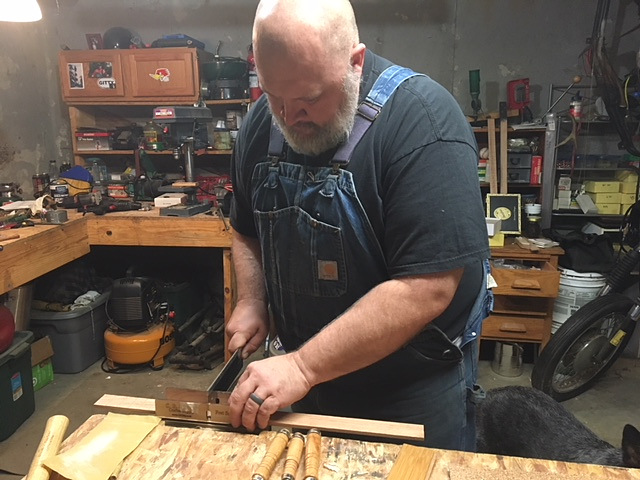 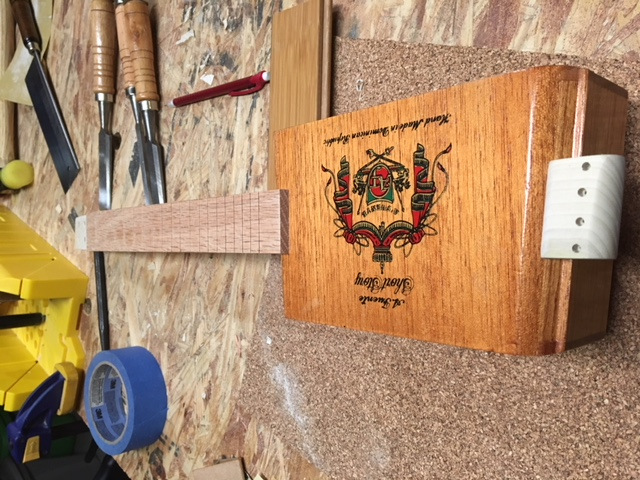 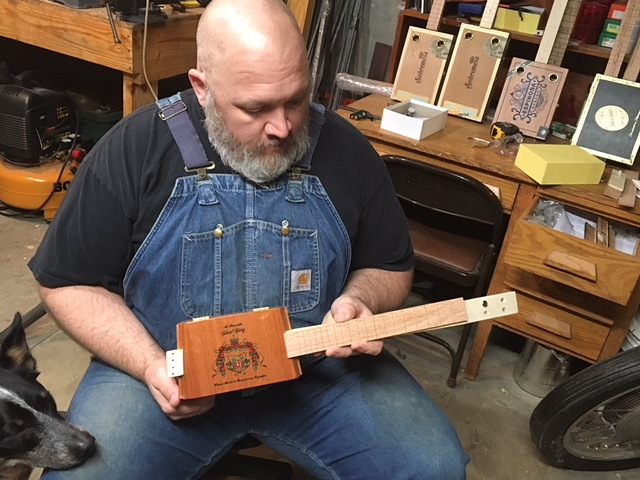 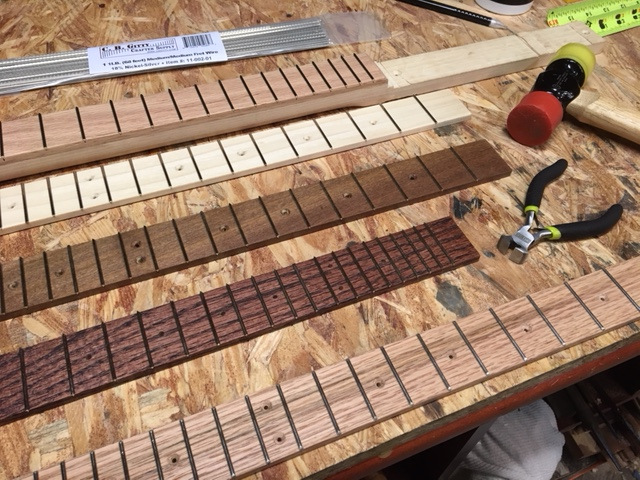 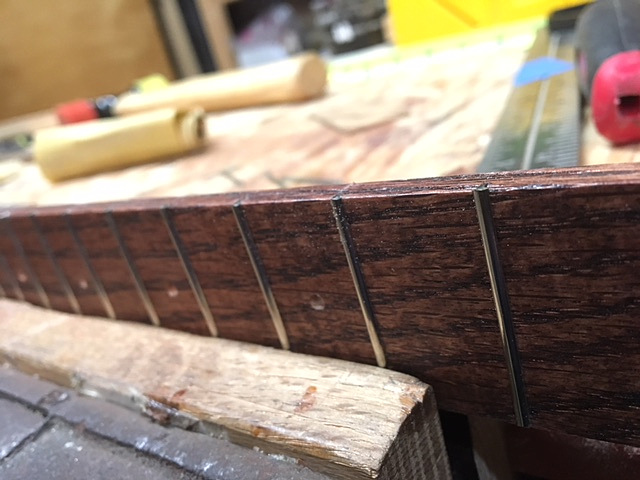 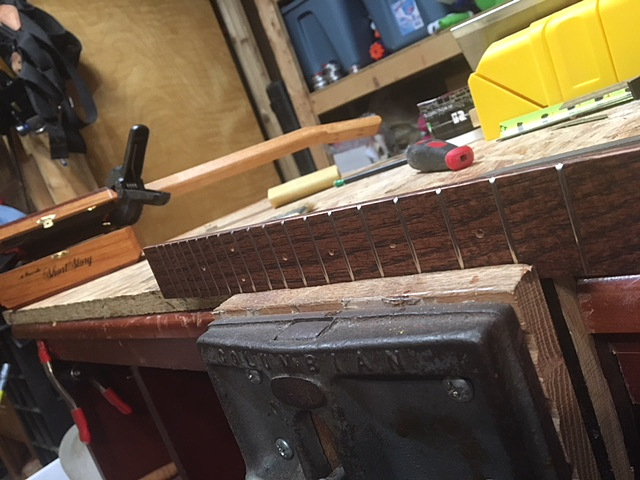 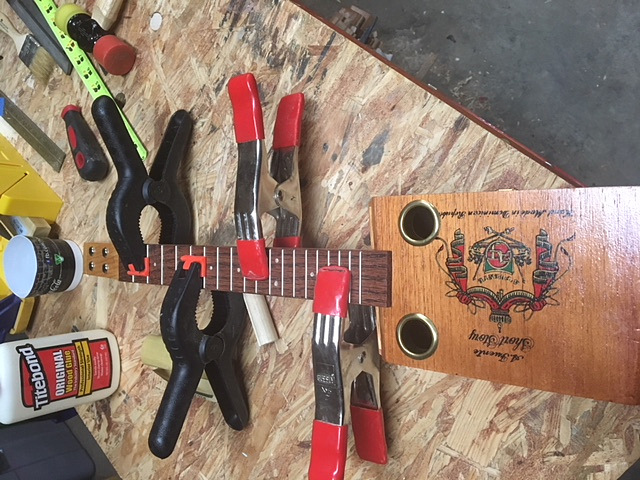 Would you like to see more of Kristopher Jensen's work?  Consider following him on Instagram or Facebook (his wife is crazy talented with the crochet needles) and maybe inquire about your own cigar box guitar.
Posted by Cameron Mortenson at 6:00 AM

Hey Del have you tried a neck made of aluminum and made any left handed guitars.years ago my brother bought a cigar box or should I say one made of all things from a snapping turtle.The neck was stretched and was a four string.the neck was strips of wood and the strings were plastic.He got it from some one who made it ,a gentle man from the bijou