A MORNING WITH JAKE

Sometimes it takes me too long to tell stories of getting out on the water and last month's half day striped bass float on the Saluda River with guide Jake Howard of Saluda Valley Guides, LLC is just one of several that are sitting in the hopper that will roll out over the next couple of weeks.

It had been several years since our last float together as Jake's striper season is typically locked up as soon as this historical run of fish starts in early spring and then continues non-stop to late summer or early fall.  Over the years, Jake has fine tuned how and where he targets these fish, which can run twenty and even thirty pounds or more in weight.  Find one and you'll likely find many others.  The Saluda River continues to evolve as a fishery and it always surprises me that such a place exists as it flows from the outer edge of Lexington downstream to the metropolis of Columbia. 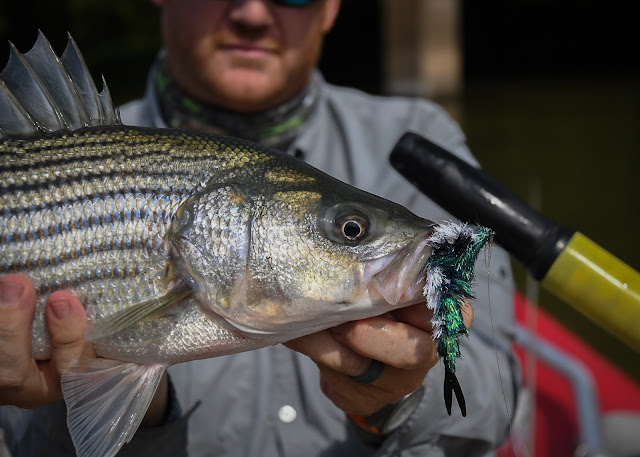 A last minute cancellation on Jake's books, along with a hall pass on my birthday, gave way to spend half the day together in his raft.  We started downstream from the Lake Murray dam and a dense fog rested on the cold tailwaters where underneath we found some slightly stained water.  River water can sometimes be too clear and then other times it can be too dingy to but this was in a sweet spot with the Looper Flies Ripple Ice Game Changer on an intermediate line getting where it was supposed to be.  It wasn't too long before we started seeing stripers here and there suddenly appear behind the fly and take a swipe at it.  When they'd get it right, the Bandit ten weight would double over and the fight was on.

We targeted structure, creek mouths and the banks were sometimes both were present.  We also found fish on deep shaded drop offs.  Most the fish were all about the same size but of course we saw others much larger that gave the fly a look and swam off.  Or even more heartbreaking, would move off a shallow flat before we had a chance to put a fly in front of it's face.

Through the morning we moved two or three dozen stripers, brought a dozen or so into the boat and even rolled a large brown trout (they live there too) in a pocket beside some riffle water.

All in all standing at the front of a raft was not a bad way to start out my 45th birthday. 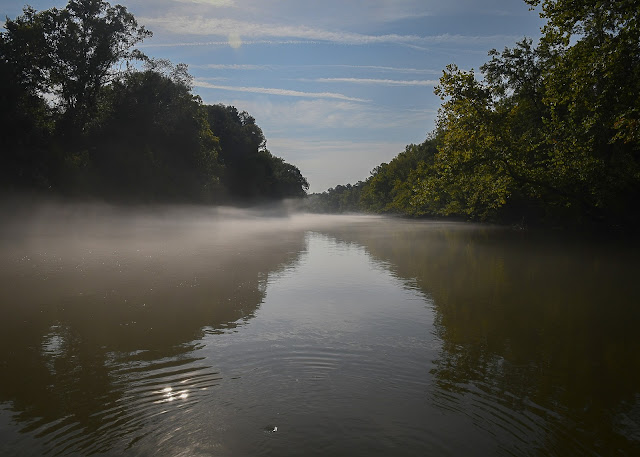 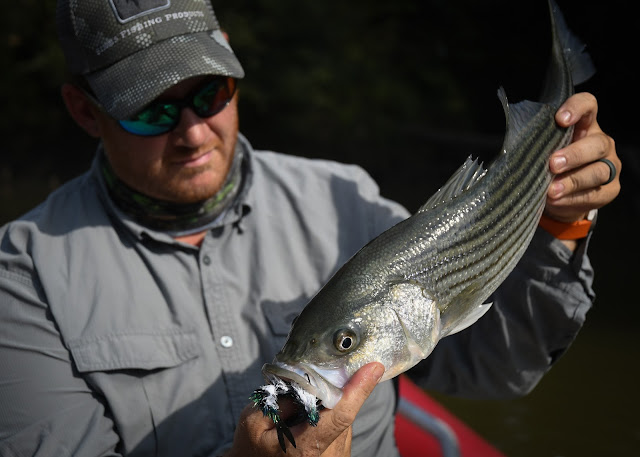 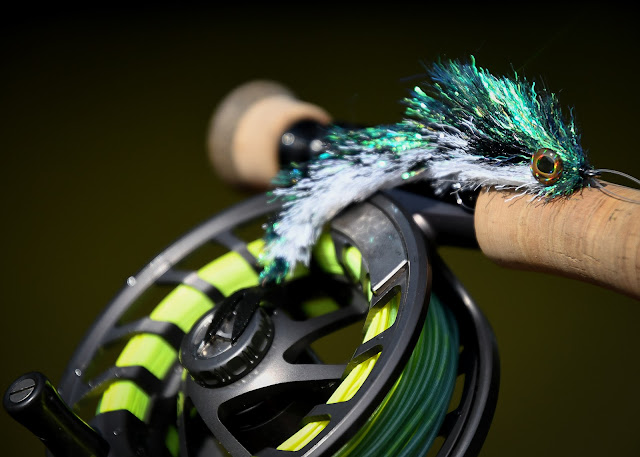 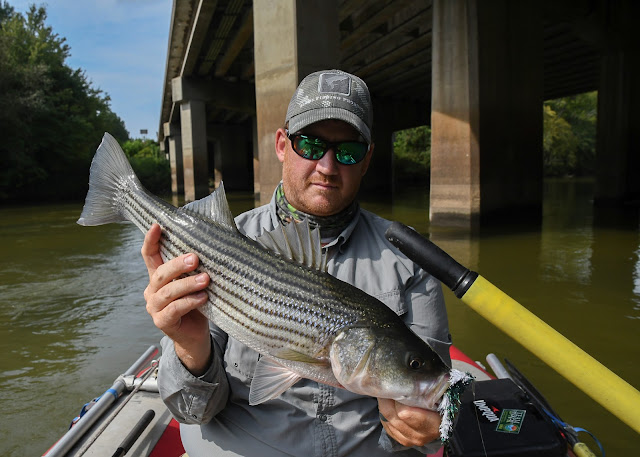 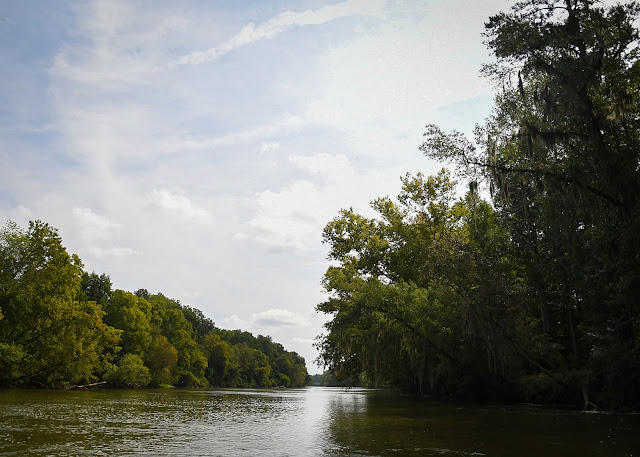 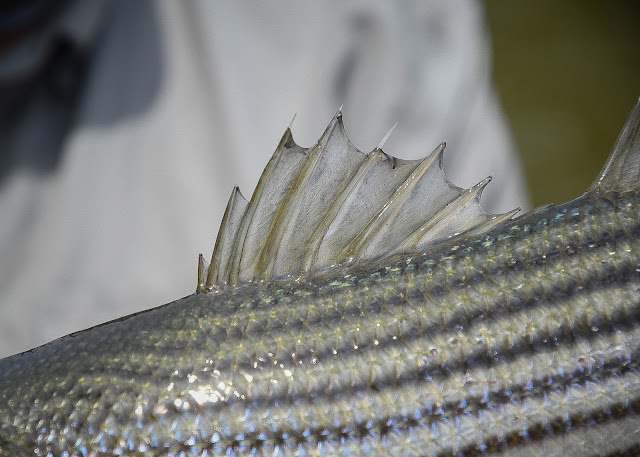 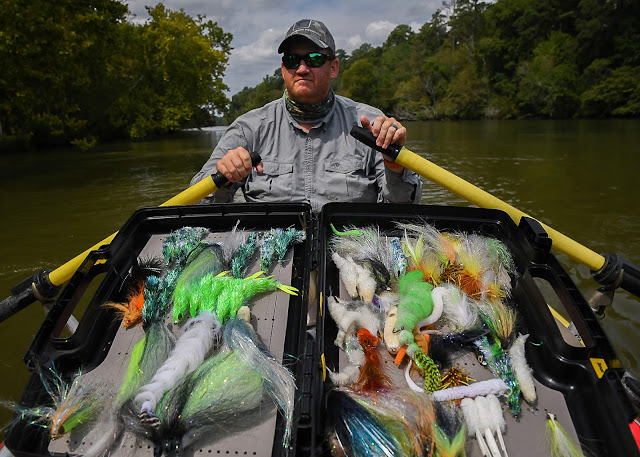 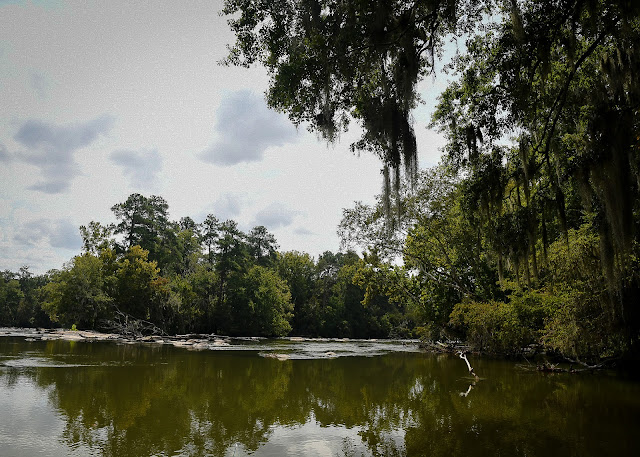 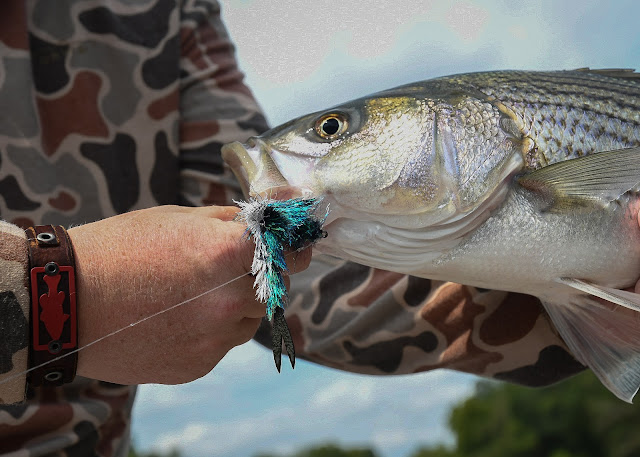 If you're anywhere near Columbia, South Carolina, or plan to be at some point, give guide Jake Howard of Saluda Valley Guides, LLC a call.  He can put you on striped bass (along with a mix of other warmwater species) through the warmer and hot months and trout that also live in the tailwater in big numbers the rest of the year.  Consider following him on Facebook and Instagram as well to see what he's up to on the water.

Z... Indeed. He has the Saluda River dialed.