My iPhone is full of several thousand photographs and more than a few forgotten T.F.M. posts that I intended to write but never got around to it.  Sometimes, like in this post, something recent will spark a memory and I'll scroll back in my phone to find photographs of a day on the water with a friend.
Ten years ago, I started trading messages with Vince Stegura of Skinny Water Culture on Facebook and that was followed with the odd text message exchange or phone call every now and then over the years.  I've always admired the community that he's built with SWC and we finally had a chance to fish together a couple summers ago when I was down in Clearwater, Florida on a work trip.
Vince and I met on a side street south of town and walked out to the beach looking for snook.  Like many impromptu trips, the conditions weren't exactly right for beach snook but it was a chance to catch up in person and we started walking slowly north looking, watching, and talking. 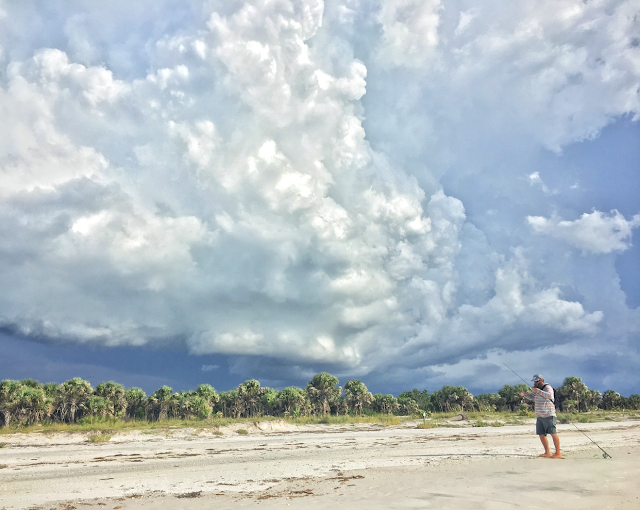 It was late afternoon and the glare was making it tough to see the white on white shape of a snook hovering over the sand in the edge water.  We were also keeping an eye on the dark clouds that were building up in towers behind us.  We thought the storm might miss us but thought wrong.  When it did strike, we were several miles away from our cars.  We ended up soaked to the bone and more than a little nervous with massive lightening strikes popping all around us.  When it passed, we turned around walking the beach back to the cars.  We threw a few casts and had a few tugs which might have been a snook but more likely a ladyfish or jack.
The real takeaway from these few hours on the beach, followed by bar tacos and brews, wasn't the fly fishing but way more that I got to spend some quality time hearing the SWC story from the man, "Sug".  I look forward to getting back down there again sometime for more of the same...minus the storm.

If you've read this far, jump over to the Captains Collective and listen to Podcast #55.  Hunter Leavine dives deep into the weeds with Vince in this hour long interview and it's a stellar insight on who he is and why Skinny Water Culture is the way it is.
Posted by Cameron Mortenson at 6:00 AM