The recent fall opening at Pyramid Lake was a good reminder that I had one more post that's been sitting in draft form hitting all the gear highlights for a final "The Ladder Diaries" post from the trip this past spring. 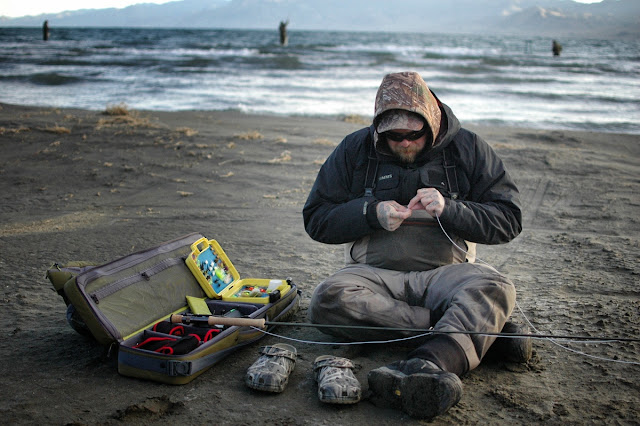 Tardy, I know, but better late than never.  If you want to get caught up, check out these posts first...

This was a really excellent trip all the way around with good friends and after seeing the absolute leviathan Lahontan Cutthroat that are being caught by the When The Line Goes Tight crew (check their Facebook too) lately, I've definitely have got to get back out there.

A FEW NOTES ON LADDERS
Start about any conversation on Pyramid Lake and the first question you get back is, "Isn't that the place where you fly fish off ladders?"  Well...yes, yes it is... 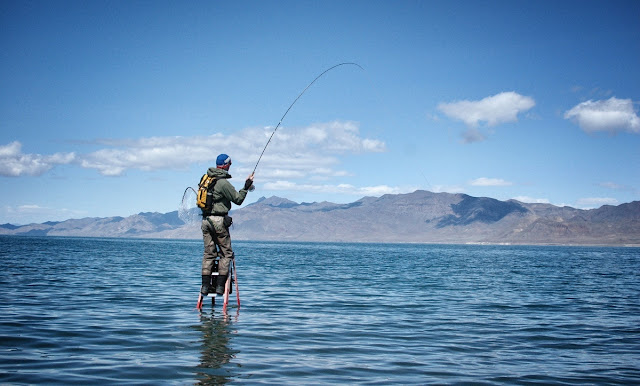 Why a ladder?  A ladder gets you a couple steps up above the water and this really helps with making long casts, seeing into the water in front of you, and it keeps your legs and feet from getting cold from being in the water for hours on end.

Truth told you don't absolutely have to have a ladder (one from our group never used one) but after three days out there I'm a believer.  There are all kinds of different ladders used at Pyramid Lake from cheap two steppers to more expensive ladders with standing platforms.  Some of even taken it next level with scaffolding setups which included padded chairs, a cooler, and grill.  Others have fully custom set ups with swivel chairs and places for gear.  You can get really serious about a ladder if you fish Pyramid Lake a lot.  Or just stick to a cheap folding ladder like I did.  A couple steps up makes a huge difference.

I believe new regulations are now in play which require a name tag to be placed on your ladder to make it legal.  There may be other restrictions that apply as well.  I'd check in at Crosby Lodge for the most up to date information.

FLY RODS AND MORE FLY RODS
I think that I took six or eight different fly rods on this trip and as is typical, I only used three of them.  It's always good to have a couple backups I guess.  Right?

Maybe the most surprising fly rod of the trip was the ECHO Glass Switch 11' seven weight.  I put this fly rod together on the last day at Pyramid Lake on a whim and a dozen cutthroat later I am certainly glad that I did.  Though it might not necessarily made to do it, the ECHO Glass Switch handled sinking lines like a champ.  I was able to bomb long casts from the ladder, let the flies sink near the bottom and then slowly work it back.  I was touching parts of the lake that I hadn't the two previous days and this switch rod really impressed me.  Maybe the best part of the ECHO Glass Switch is the price tag of $280.  That's a lot of value for a kickass switch rod. 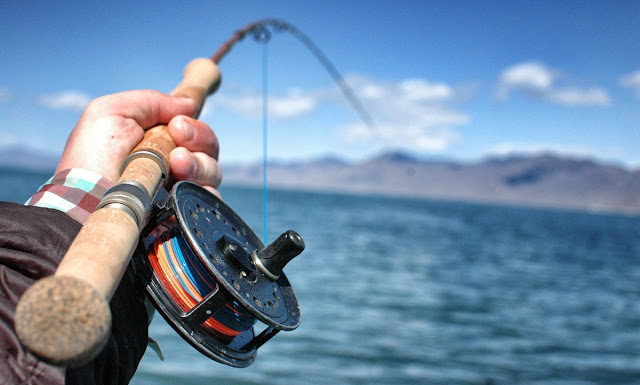 Right before leaving on the trip, Robert Spalliero of Custom Fly Rod Crafters made sure that the newly released Swift Fly Fishing Epic 888 build arrived and I spent the better part of two days working this fly rod out with both floating and sinking fly lines. 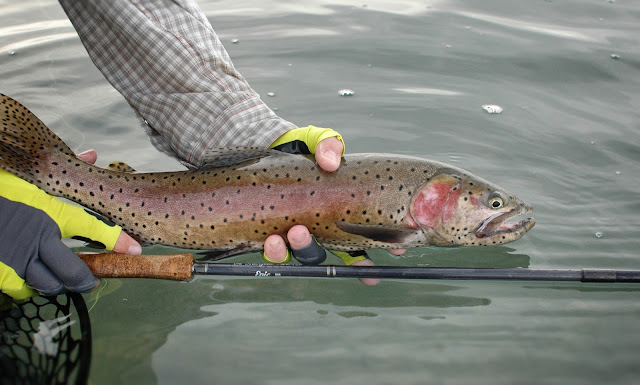 A six weight might seem a little light for Pyramid Lake but I wanted to check out a prototype of the soon to be released Orvis Superfine Glass 8'6" weight on the lake.  The Superfine Glass did equally great with both Scientific Anglers SharkWave GPX and the RIO Outbound Short fly lines.  This is going to be an excellent addition to the Superfine Glass line up and this will be a work horse capable warmwater, coldwater, and light saltwater. 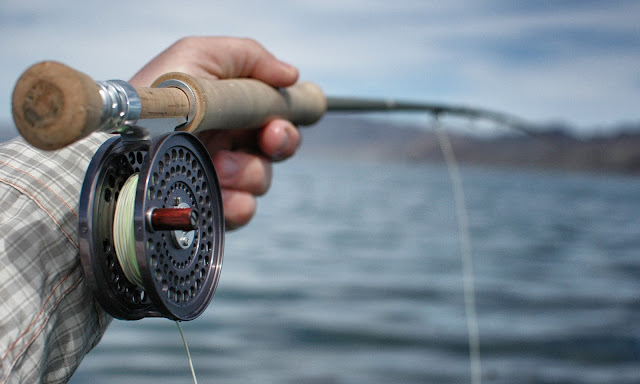 The above photograph still hurts quite a bit since I laid the Superfine Glass on top of the ladder and walked back to shore to fetch my eight weight to use as well.  Twenty minutes later I came back to the ladder and the fly rod (along with a CFO III and an $80 fly line) were gone.  It was a windless afternoon and the water was completely flat.  I searched for over an hour 200 feet around the ladder and found nothing.

The only two explanations for this happening were that maybe a fly was dangling in the water and a cutthroat came by and snatched it, along with the entire outfit, into the depths of the lake or there is the legend of the Water Babies as well.  Maybe they were coming for me and took the Orvis outfit instead.  Freaky...

TOO MANY FLY REELS
I already told you that I took too many fly rods on this trip which also means that I took too many fly reels as well.  The collection taken was a mix of contemporary and vintage clickers but a new one to the collection was The Spey Company 3.5" Spey Trout.  Along with being a looker, the Spey Trout just purrs.  This is a great choice for glass in seven weight or eight weight and would also do double duty on some shorter switch and spey rods as well. 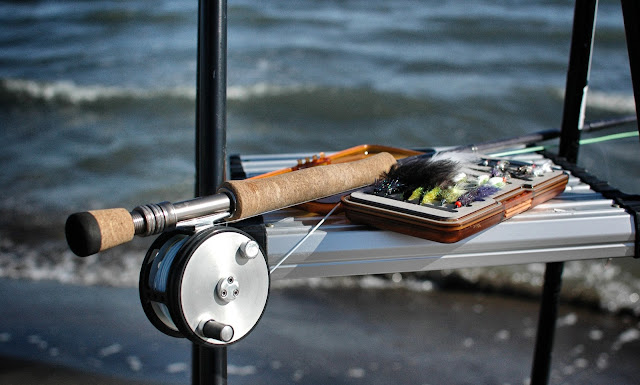 Tim Pantzlaff of The Spey Company makes a hell of a fly reel and there are many different configurations to choose from.  So many excellent options and these fly rods are built to take on trout to salmon.

FLY LINES - ONES THAT DON'T FLOAT
You can fish a floating fly line on Pyramid Lake but most of the work is underwater with streamers and foam beetles dredged low in the water column.  As I was prepping for this trip I kind of got a little crazy about what fly lines I should be bringing but when it all boiled down to what I really needed as far as sinking lines, the four shown below did all the work and did it well. 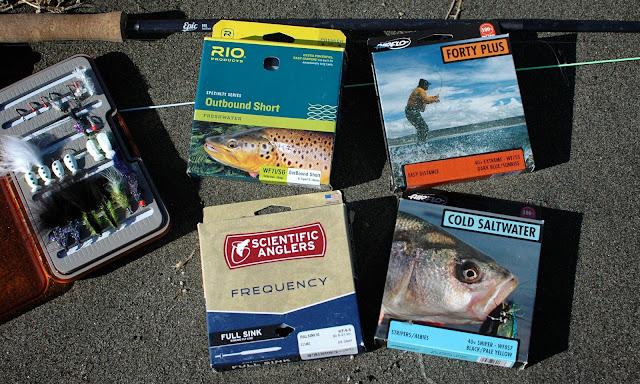 Even though I had heard a lot positive about the RIO Outbound Short, this was my first opportunity to use this fly line and it's an interesting match on glass fly rods for sure.  When the casting mechanics are perfect, the short front end taper of this fly line will rocket through the running line through the guides.  Casting two fly rigs was no problem and distance came with ease.

The Airflo Forty Plus and Cold Saltwater were two other fly lines with short front heads that were impressive for distance and getting flies down quick.  These fly lines was a perfect matches to the ECHO Glass Switch and Epic 888.

Fly lines can be expensive but the Scientific Anglers Frequency Full Sink fly line is priced at $50 and gets the work done.  These are quality fly lines that area ton of value and if you use sinking lines infrequently then spring for one of these and save the rest of your money for beer or flies. 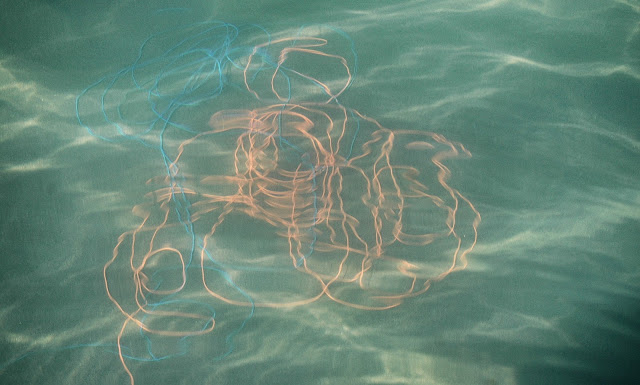 You're going to see a lot of fly line in the water beneath your ladder at Pyramid Lake and most times it's going to look like someone exploded a can of Silly String at your feet.  Might as well have one that can do the work.

A DAMN GOOD NET
These Lahontan Cutthroat are big, slippery, and they have some teeth on them too.  It really helps to have a good sized net to keep them in the water but under control when slipping the hook from their jaw.  Big net favorites include the Fishpond Nomad and Rising Fish nets. 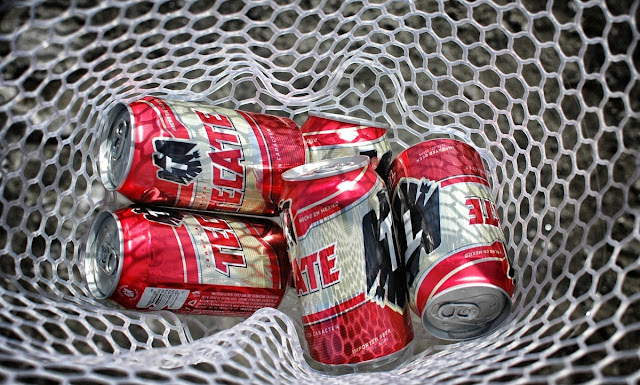 A good net can also come in handy when being a good ladder mate and fetching a brew for you and all your friends from time to time.  Load it up and go for a walk ladder to ladder.

BOBBERS...OH, I MEAN STRIKE INDICATORS
Most strike indicators that I've used in the past have one potential flaw, they slide up and down the leader after casting.  There are ways to hold them in place but even that can make it tough to keep them in the place that you want them. 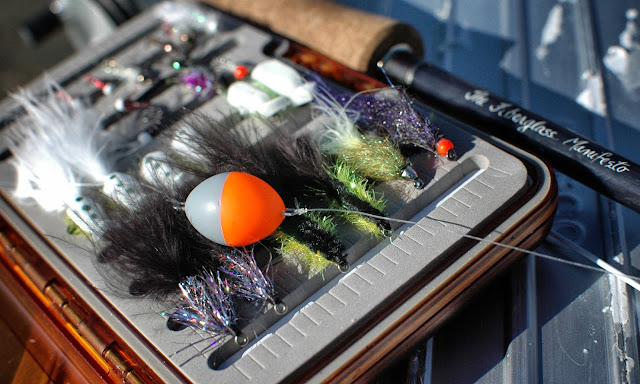 The In-Line Suspender Indicator works on waterways, like Pyramid Lake, where you know the exact depth you want your nymphs to ride, you cut your tippet to length and knot to the loop and attach your leader to the loop on other side.  Easy and reliable.  There are no worries about the strike indicator changing position on the leader and the flies stay at the same depth cast after cast.

FLIES FOR PYRAMID LAKE - YOU DON'T NEED VERY MANY
On any trip it's really easy to over think, over tie, or over buy the flies that you'll need.  Pyramid Lake is not different and we all showed up with flies we thought we might use, pilfered the guide's boxes, and bought some in Crosby Lodge too. 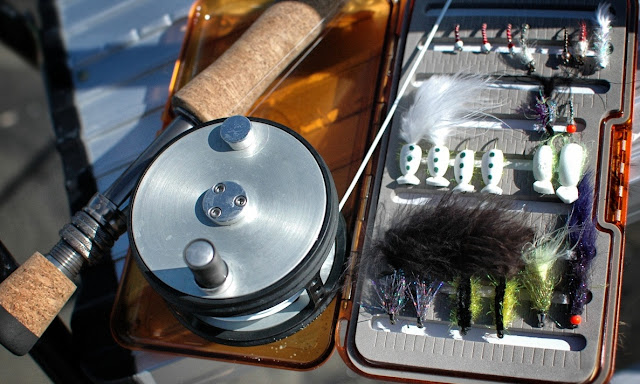 Flies for Pyramid Lake fall into three categories of Midges, Beetles, and Streamers. If you have a couple colors and a size or two of each then you'll be fine.  Don't overthink the flies.  Simple works. 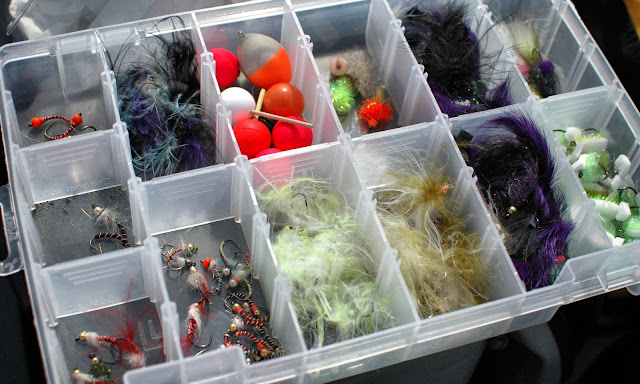 The saying that "If it ain't chartreuse then it ain't no use" certainly falls in line here since beetles and streamers all should have this color in play.

THE ALINER - A HOME AWAY FROM HOME
As plans were coming together for the trip, trip mate Derrol Hammer asked if he should bring his Aliner trailer along.  We went back and forth on this but fortunately he decided to bring it along. 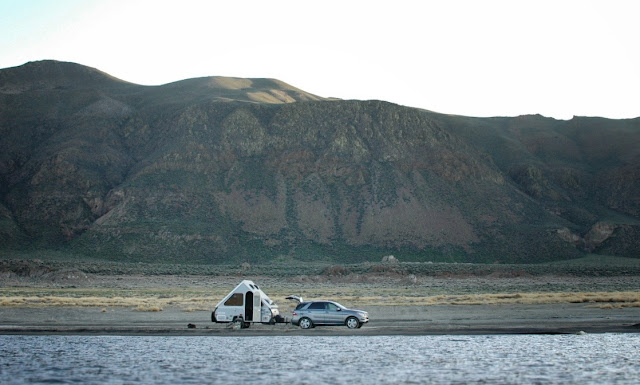 The Aliner took less than a couple minutes each morning to set up and was a great base camp to take a break, store gear, and get out of the cold and wind.  A bed on one side and a small kitchen table on the other.

Though we didn't sleep overnight in the Aliner, having it along made for the perfect respite for the crew though I feel a lot bad for all the shore sand the wading boots tracked in Derrol's trailer. 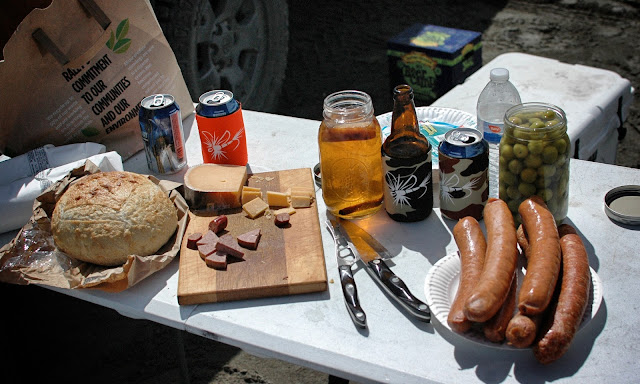 Having the Aliner along allowed for setups for lunch like this excellent spread.  We didn't go hungry or thirsty on this trip, that's for sure. 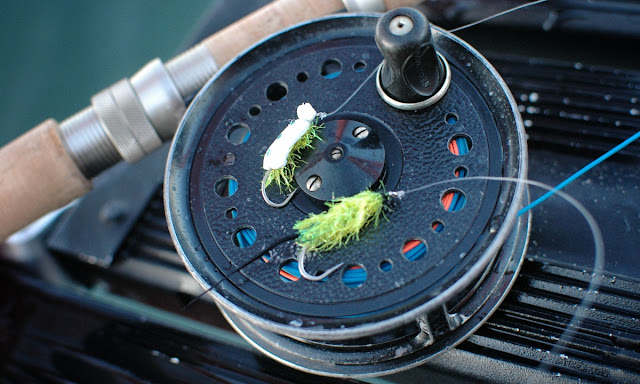 There was other gear and apparel used on this trip but these were the highlights that rose to the top of the heap six months later.  Now to plot the return to Pyramid Lake...