Earlier this week, I had a great conversation with Jordan of JP Ross Fly Rods & Co. and he has a real interest in growing his fly rod shop but he's focused on doing it with authentic engagement with customers.  While some companies end up farming out their marketing, Jordan wants to be the person who answers the phone, an email, or engage in DM's on social media.  I get it and I like it.
Along with that, he's been cooking up a series of giveaways that are planned for the coming months (look for one on T.F.M. soon) and today he kicked off a Beaver Meadow S-Glass Zen Gray fly rod giveaway on their Instagram page.  It's worth playing along... 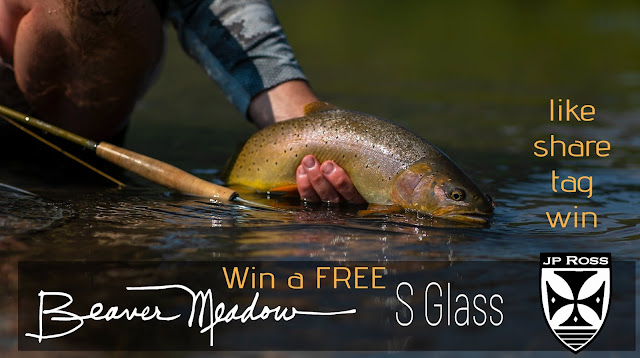 The "fine print" from JP Ross Fly Rods & Co...
"We will be running a number of giveaways this fall and into the holidays.  Here is our first.

When we reach 4,300 followers were going to choose a winner based on their participation and tagged new followers.

Please encourage others to follow us and support our "GET OUTSIDE, SIMPLY FISH, BE HAPPY" mantra."
Instead of providing a discount code, JP Ross would rather that T.F.M. readers reach out directly to him by email, telephone, or DM to talk about a fiberglass fly rod blank, fly rod, or custom build.  Make sure that you mention T.F.M. during your conversation to save some money on your order.
Visit the JP Ross Fly Rods & Co. website and be sure to follow along on Facebook, Instagram, Twitter, and YouTube.
Posted by Cameron Mortenson at 6:00 AM No comments:

Need an excuse to get to Asheville this weekend?  Crooked Creek Holler, along with friends at Asheville Greenworks, Southern Culture on the Fly, Lil' Speck's Adventure Co., Vedavoo, Traeger, and Archetype Brewing have organized a roadway cleanup followed by a (free) beer and chili feed afterwards.
I hear there are going to be some stellar raffles (as usual) which the proceeds will benefit Asheville Greenworks with their Trash Trout Program. 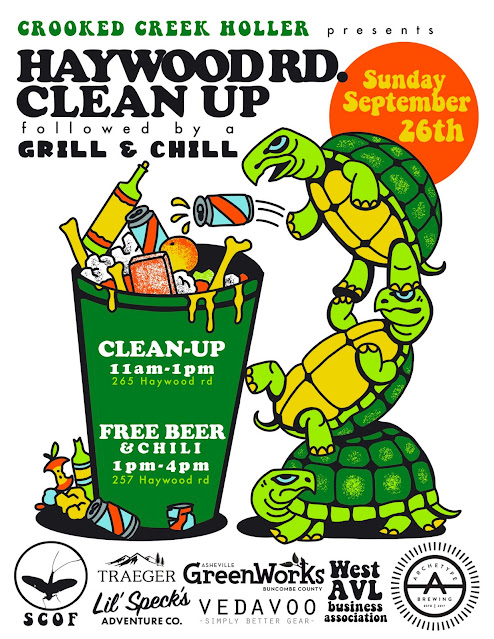 Register for the road clean up HERE and look for the good fun to kick off at 11:00 a.m. on Sunday morning.  Brews and chili will be waiting for you at Crooked Creek Holler beginning at 1:00 p.m.
As always, check out the latest on the Crooked Creek Holler website and follow along on Facebook and Instagram.
Posted by Cameron Mortenson at 5:00 AM No comments:

I've been a Swift Fly Fishing "Fanboy" for years now and even though the entire Epic range of fiberglass fly rods are swell, I think everyone at least needs an Epic 686 and a Bandit.  I could fish the world with just those two sticks and have a hoot doing so.

The problem with this suggestion has been that the method of entry required that you to go one of several routes with a Ready to Wrap Kit (which not everyone wants to learn how to build their own fly rod), a Studio Built Fly Rod (which means breaking your piggy banks for), or a custom build on an Epic Blank (which can be as much if not more than having Swift Fly Fishing build it in their shop).

Enter the Epic Reference Series which is everything that you'd expect from a fly rod with the Epic badge on it but at an off the shelf price thus saving you a wait for shipping and a few hundred dollars. 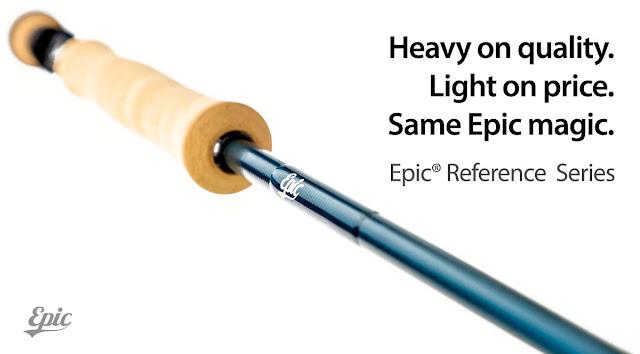 "Born of the same pedigree as the Epic Studio Built Custom fly rod range but without customization options.  The new Epic Reference Series are built using the same premium quality grips, reel seats and industry-leading blanks, these Epic fly rods are ready to ship immediately to your door.  Backed by Epic's renowned support and customer service.

We have been asked about the difference between the Reference Series and Studio Build fly rods and created this comparison chart that is posted on the Epic Blog.

In short the difference are:

"Reference Series Fly Rods" - No customization options and ready to ship.
"Studio Built Fly Rods" - Many customization options, custom inscription, handcrafted to order, and a waiting list for delivery."
Check out the Epic Reference Series on the website, consider a pre-order with a hefty discount, and be sure to follow along with the latest on Facebook and Instagram.
Posted by Cameron Mortenson at 6:00 AM No comments:

Over the years that tenkara has been around, I've had two wonders.  First, why are the rods always so long and second, how come no one was using fiberglass in the construction?  A shorter tenkara rod would seem to have quite a few applications for small water and fiberglass, especially in a shorter tenkara rod, would likely be a perfect material in a rod that had full-flex capabilities.
Well, it appears that my questions were answered in DRAGONtail's latest Kickerstarter push with the FoxFIRE ZX280 Tenkara Rod.  This tenkara rod starts with S-Glass fiberglass and the tip sections incorporate a glass and graphite mix to stiffen it up.  The multi-length zoom sections can be configured so that this tenkara rod can be used at 9'3", 8', or 6'6" in length.  The ZX280 can be reserved in one of two colorways as well. 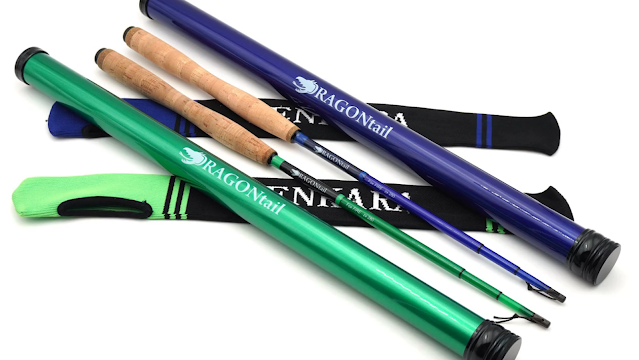 If DRAGONtail Tenkara seems familiar, this company is one part of three different brands which include Moonlit Fly Fishing and Nirvana on the Fly that all fall under Leland Fly Fishing.  There are some great fiberglass fly rod choices from these companies and I would expect that the DRAGONtail S-Glass tenkara rod would be a lot of fun as well.
Jump over to Kickstarter to check it all out and consider backing this project which is already three times past it's funding target.  This project is undoubtedly a go.
Posted by Cameron Mortenson at 5:00 AM 1 comment:

AFFTA - Conservation from the Couch

For almost the entire time that I've been writing T.F.M., we've been talking about protecting Bristol Bay, Alaska and everything to do with NO PEBBLE MINE.  I'm unswayed on this still but damn, it's been a long hard fight with too many twists and turns that just don't seem to end.

AFFTA has kicked off their Conservation from the Couch series again and tonight's conversation is with Scott Hed and Dr. Sam Snyder with the latest updates.

Heads up, it's on Zoom but we've all gotten pretty good at those, right? 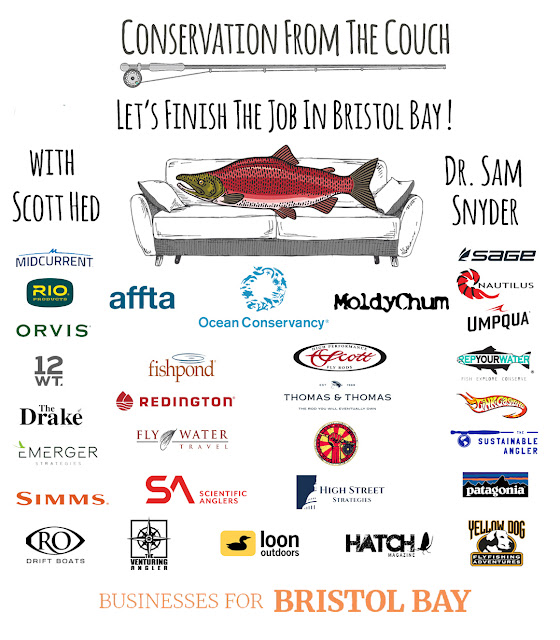 Sign up for the Conservation from the Couch session HERE.
Posted by Cameron Mortenson at 6:00 AM No comments:

Summer might be winding down but the hopper box is still getting a workout.  Signature Tyer Charlie Craven of Charlie's Fly Box gets deep in the weeds on his favorite terrestrial patterns, what's in his fly box, and then how he likes to rig his hopper rigs on the water.

Press PLAY twice on these latest shortie films from Umpqua.

Check out the Umqpua's Guide to Terrestrials for more.  I could still use a couple of the Bug Locker fly boxes and it seems like the perfect way to keep big foam and winged patterns from getting crushed.

Posted by Cameron Mortenson at 5:00 AM No comments:

THE FLYFISH JOURNAL - Everything is Coming Up Millhouse

The folks from The Flyfish Journal released a stellar film this week that checks a lot of boxes off for me starting with carp on the Columbia River.  Please PLAY and enjoy this one...

You can see and read more on this on The Flyfish Journal with their Millhouse in PDX exclusive and if you don't receive this magazine in your mailbox every few months, you should consider subscribing.