Last week I was trading text messages with a friend in Seattle when he mentioned that he had become a "Phillipson Snob". I tossed a text back that he should send me his brown glass Heddon Pal #8383 which I have been wanting for quite some time. A couple text messages to firm up a price and a money order was quickly dropped in the mail.

The Heddon Pal #8383 arrived yesterday and I couldn't be more impressed with the look, feel, and condition of this fly rod. 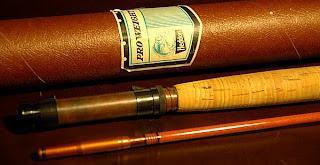 There are few things as beautiful in the fiberglass realm as brown weave glass and the Heddon Pal script inked across the blank. The double loop guides are a nice touch as well. 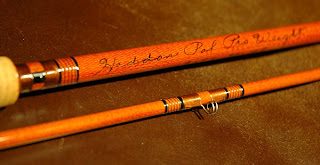 The card board rod tube, Heddon decals, and rubber cap are in great condition for being decades old. The blank says it's a 7 1/2 foot five weight but those that have cast this rod like it better with a six weight which makes sense to me. Either way it's going to get fished!
Posted by Cameron Mortenson at 8:00 AM

Vlad...thank you. I will. This is one that I could not pass up when it was offered.

Hello gentlemen, I have one of these rods which is near mint condition. It is all original as well. My name is Keith. If anyone is interested you may contact me at kdewitt2012@gmail.com