Quest for the Holy Grail

(Tom Anderson took some time and wrote up another excellent post for T.F.M. I enjoyed his story as well as his unreal collection.)

One day in the early 80's while at Dan Baileys, I saw a large barrel stuffed full with what looked to be old discounted rods including, as I remember, many inexpensive spinning rods. Long story short, I pulled four aluminum tubes out of that barrel, each containing a San Francisco Scott fiberglass fly rod from 7 to 8 1/2 feet. I distinctly remember the salesman telling me that those rods were absolutely worthless in the West and that they just wanted to clear them out. The spartan, no nonsense look of them really appealed to me and of course the price was right so disregarding the advice I bought them all, paying so little that it now seems like theft. 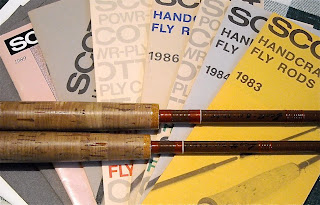 I fished those rods in the west and elsewhere quite a bit over the years before I noticed that when held up to light, dark areas could be seen in both the tip and butt sections. I later learned that the dark areas were fiberglass inserts which had been carefully placed at strategic locations to tune the action of the rod. I always found it amazing that Scott would go to the trouble of doing that with a production rod. To me, that detail always added to the mystique of those early glass Scott's.

Those glass rods lead to more Scotts, mostly G-series rods which seemed to me the finest graphite rods available. I always thought that if Everett Garrison had built graphite rods that they would have looked very much like a G-series which continued the purposeful and unadorned cosmetics of the earlier glass rods. My first Scott graphite was a San Francisco G855 which was followed by the classic G904, a pair of G904/4's, a G1004, G1005, G907, and a G908T. Al of them had similar actions which seemed just right for my casting style and being somewhat vertically challenged, the G1004 was just the ticket for keeping my back-cast out of the willows on Silver Creek while casting to those huge trico-slurping rainbows. (That was back in the days when you didn't have to get there by 4:00 AM to get a spot.) 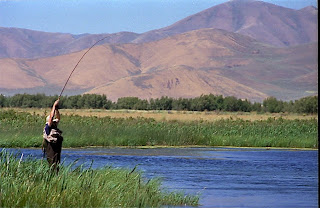 Being a dedicated Scottophile, I had always made it a point to track down the Scott booth at fly fishing shows and probably hung around too long and asked way too many questions. Thinking back, it's surprising that Larry Kenney didn't have a restraining order against me. As I remember, Harry Wilson, the founder of Scott Rods, traveled to some of those shows with Larry but I can't remember ever having the nerve to talk to him.

Some years later, several things conspired to create a real mania for a particular Scott glass rod. First, I had collected Scott catalogs each year and had always lusted after one of their short multi-piece glass rods listed in the early catalogs, and then in 1994 with the re-introduction of their fiberglass line, now called Fibertouch, Scott was making a special reproduction of the glass F70/5 as their 20th Anniversary Commemorative Model. The original of course was designed by Harry Wilson before Scott was incorporation back in the early 70's when the usual small stream rod was a six weight. Mr. Wilson designed it to effortlessly cast a WF4 with the additional advantage of breaking down to fit into an 18 1/2" case. This then was the Scott fly rod of my dreams, but of course I wanted an original which was unobtainable since Scott had discontinued that line of glass in 1986. (The reproduction was incidentally price at $500 in 1994.)

Back then, before the internet, it was virtually impossible to find a special rod unless it showed up in a used rod catalog and of course then as now, most of the catalog rods were bamboo with little mention of glass. I had been to uncountable fly shops and as many antique shops across the country without seeing a single glass Scott, let alone a F70/5, my Holy Grail rod. After years of searching, I had put all thoughts of ever getting one out of my head ... and then it happened.

My wife and I were on our way back home from Montana when we happened to stop in a small town to pick up some groceries. As usual because of my aversion to grocery stores, I was waiting in the camper listening to the radio when I spotted an obscure little fly shop across the street. Having some time to kill, I walked over to the shop and was browsing through the fly selection when I happened to look down, and there, tucked inside an old display case, among old Medalists and dusty fly line boxes, was the Grail itself, in all its yellow splendor.

With pounding heart, I asked the old fellow who I took to be the owner if I might see the rod. He obliged with the caution that nothing in the case was for sale but he didn't mind showing it to me. As he carefully took it out of the show case, I remember him saying, "Well, that darn thing looks to be home made. Just look at that writing." Little did he or even I know at the time the half of it. When I asked if I could possibly entice him into selling it, he told me, "Oh, that belongs to the shop owner and he's out on the river guiding all afternoon. Don't even know if he'll get back today." My heart sank.

Now, I not only had to convince a man who may not even return to sell a rod that wasn't for sale, but also to convince my wife to hang around town until I could accomplish the impossible. Sensing my desperation, she mercifully agreed and the wait was on. Lunch, a little antiquing and some more grocery shopping and then I saw a truck with a drift boat pull in across the street. "Cover me. I'm going in!"

Well, you know how it is. You don't want to look too anxious, be cool. I won't go into all the gory details, but after much haggling I was almost there... and then I wasn't. He just could not make up his mind and I knew he was thinking that I new something he didn't. I must confess that it wasn't pretty - desperation had set in. I did everything but fall to the floor and beg at his feet and finally, when I thought he was either going to throw me out or call the police, I heard a voice from behind the counter say, "Oh just sell that thing to the man - you know you'll never use it. It's been in there for years and here's a man who wants it. Now sell it to him." And he did ... just like that. I had been saved by an angel, his wife, whom I had not seen sitting behind the counter the whole time. 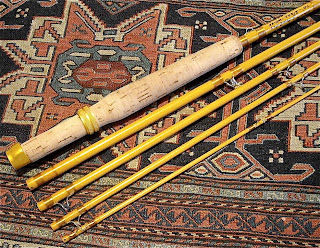 I now had my rod but actually knew little about it. This one was yellow and I had only known of the brown Scott glass. When I arrived home I began to do some research and was incredibly lucky to find the Fiberglass Flyrodders Forum. I registered and posted my questions about the rod and to my great surprise, none other than Larry Kenney himself replied to my post and here is what he had to say...

"A rod with serial number 533 is almost certainly from early Cal Tackle stock from Harry Wilson's recently designed light trout mandrels. It would have been made in 1973 or 1974 in Harry's first basement shop on 10th Avenue in San Francisco. Everything from ferruling to signature would have been done by him. When I came aboard in 1975, we rented official shop space on Cook Street and decided to start up with serial numbers beginning with 1000. The white case label dates it to 1974 or earlier. From where I sit, that model is the Holy Grail of glass Scotts and earlier is better than later. Wish I'd built one for myself when I had the chance."
Posted by Cameron Mortenson at 6:00 AM

Great story! Thanks for sharing.

That's a great read, and entertaining too. I have a number of Scott's on my "most wanted" list.

There is something about the quest for these things that is so romantic and exhilarating. This is a great story as well as a great bit of history of the sport and you never know when you'll run into the holy grail, whatever it may be. Sweet read, Thanks.

just getting into this fiberglass search .I was brought up with a hedon pro 7wt .The story took me back in time to a place in my mind that was real .Id love to walk into an old shop that is kind of dusty and has some old gear in the corner and find one of those holy grails .Cool story and congrats on the find

Fellows...there are some interesting finds out there and the neatest part is that everyone can find their own "Holy Grail".

Hi, good read. The old Scott G-Series are EPIC. I just listed one on ebay yesterday 9' 4wt 2pc. I believe it is a California production, pre-Colorado. I thought I would let you know in the event that you have anyone looking for something of the vintage: http://cgi.ebay.com/ws/eBayISAPI.dll?ViewItem&item=161438312136

Thanks, and tight lines,
George