Bruce Nuss of Nuss Custom Rods sent along these photos and narrative after spending a week looking for bonefish in the Bahamas...and on glass no less!  Enjoy...

Every couple of years my friend and I travel to Long Island, Bahamas for a week of chasing bonefish on the flats.  All trips up to this point have been solely carbon fiber, supported by the usual bonefish tackle of Gotchas, Charlies, Clousers, and various fly assortments for cuda, tarpon and whatever swims within casting distance flies. 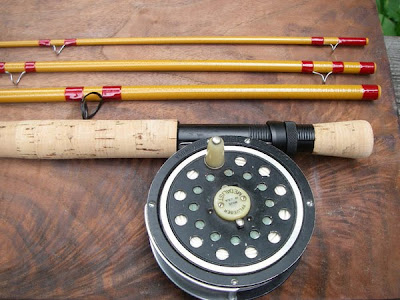 My recent introduction to the Fiberglass Flyrodders forum illuminated an interesting new wrinkle to my thirty years of building fishing rods...internal spigot ferrules. What a revelation. No more do I have to install nickel silver ferrules which add weight and a significant stiff spot to the rod, especially given the fact I wanted a four piece rod for traveling convenience. It was like Christmas in March building a four piece nine foot eight weight glass rod to haul to the Bahamas. 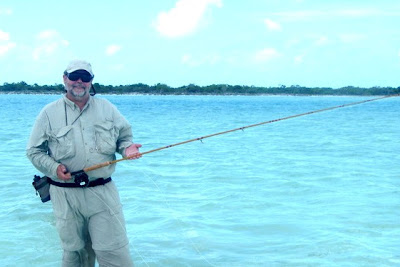 Being blessed with an assortment of Lamiglas and Reed one piece glass blanks the search was on for the ideal one. I settled on an ancient Lamiglas FB-109-9S which is a slow but very powerful unsanded blank that just felt "right". There is no other way to describe the decision than that. I found all the components in my stash of “stuff” and construction began. I measured and cut the blank at what seemed to me to be the correct lengths. I always struggled with algebra, however geometry was always kind to me. I ended up with a rod of differing section lengths but a rod that cast like a rocket launcher which is a term I usually reserve for the silly tip flex carbon monstrosities. I lined it with a Flip Pallot weight forward eight weight floating bonefish line which is intended for close in fishing. I believe the heavier front end of the line really helped load this rod as it was intended for a nine weight way back when. 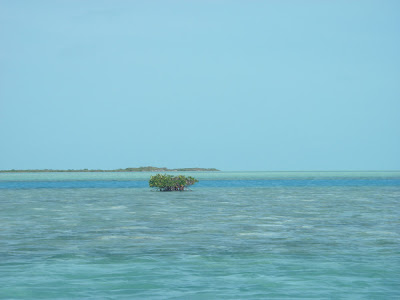 Anyways now we're in the Bahamas and it was hot but the tides were good for daytime fishing. The weather was sunny, clear, but a tropical depression was sweeping through the southern Caribbean so the winds were 20 to 30 knots. Great if you are casting downwind, but oh my, casting into these winds was, well, interesting to say the least. We fished some sheltered coves and inlets, per the tides, which was perfect for my introduction to fishing glass for bones. 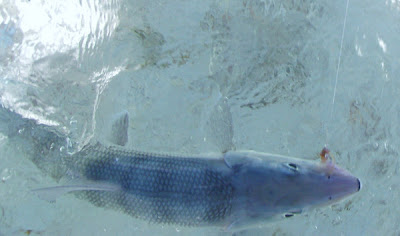 There was no doubt that the Lamiglas would throw a fly as far as the caster was capable of casting but when you add in the anxiety of wanting to make the perfect cast, hit the spot, and not spook the fish. When I finally did hook up, it was both a relief and a thrill. I tend to romanticize too much but my mentor never had the opportunity to fish for bonefish. He opened his shop in 1923 and to think that a blank from his shop was living and thriving in these conditions made me appreciate this situation even more. I hooked over a dozen fish, landed seven, before the unthinkable happened. 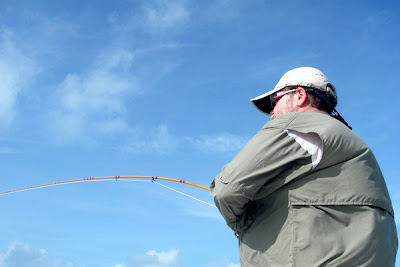 In my overzealous attempt to build this rod, I used ferrule stock that was simply not capable of withstanding the stress at the tip section joint, and while landing a five pound plus bonefish the ferrule broke. I watched as the tip section sat on the nose of this gorgeous bonefish. Surprisingly enough I smiled as the other occupants of the boat exhibited shock worthy of witnessing a car wreck. Fifty-five years old and I learned a valuable lesson. Just another reason for loving this sport is that you can always learn more. When I had the time to actually study the failure it became too obvious that I had not considered the structural strength of the ferrule stock in relation to the blank. Again, lesson learned. I now double build most internal spigot ferrules. Thanks to the Fiberglass Flyrodders forum and generous rod builder Fred Paddock, I now have a much better understanding of the physics of internal ferruling. 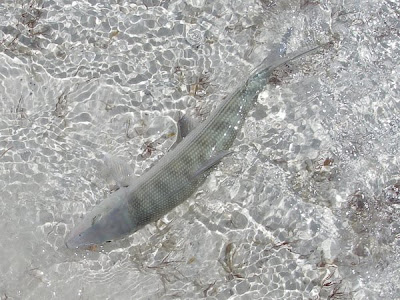 The experience of hooking, fighting, and landing the ghost of the flats on a glass rod was like fishing for bonefish for the first time. I learned that the start up drag of my trusty Pflueger 1495.5 was too much for my tippet on the first hook up. I learned that the forgiving action of glass was capable of subduing a fish in less time than my graphite because the rod didn’t overpower the tippet as the fish pulled harder or ran farther. I learned that no matter how much you think you know that you never know it all. I try to carry this thought with me everyday in every aspect of my life. Talk less, listen more, and smile so much that folks wonder what you are up to.

I have a feeling that Bruce will be taking more than one glass rod with him for the trip next year.
Posted by Cameron Mortenson at 6:00 AM