To find the unique and unusual are always objectives of writing this website so I was very pleased when Christian Hörgren sent this write up and photographs of a recent acquisition to share on The Fiberglass Manifesto.

Christian has quite a collection and I'm very happy that he's willing to give us a glimpse from time to time.

Christian wrote...  "Alex Kaplun is best known for his brand Megoff, maker of titanium fly reels. He is the designer behind several groundbreaking reels made for IMAGO, Hardy, and Leen Huisman.  A master craftsman who has influenced the development of the modern fly reel.  Still very few have heard of Alex Kaplun.  Some of the T.F.M. readers might remember the article I wrote on the IMAGO Gaia for T.F.M. in March.

A friend of mine is the proud owner of an old Megoff prototype.  It was sent out in the late 90’s by Alex Kaplun to a guide on the Kola peninsula for field testing.  The story tells it was one of the best reels this guide had ever fished with.  A wonderful performer with a rock hard anodizing.  After a while the guide received an invoice from Kaplun, asking a rather hefty price for the the reel.  This was not what he had expected, and communication ceased between him and Alex Kaplun.  The years passed and the reel ended up in a drawer in a suburb of Stockholm." 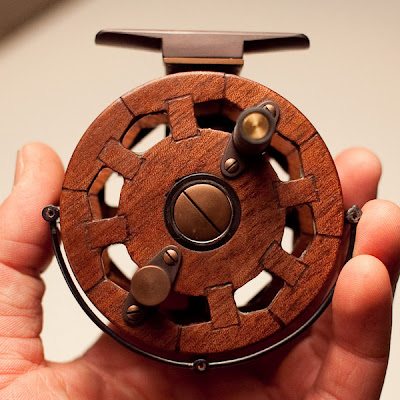 "I recently had lunch with my friend and all of a sudden he picks up this old Megoff.  "It's dead", he says.  "That’s too bad", I tell him.  "Check with Kaplun, he can fix it for you".  My friend looks at me.  He knows about my obsession for fly reels.  "I believe this reel should belong to you", he says.  A day later, Alex replies to me by mail.  He remembers the story of this reel but it’s all history.  A pin-striped LOOP cap would settle as payment for the repair.  A month later the reel lands on my desk.  It’s heavy, complicated, and understated in it’s visual appearance, but solid with an true and honest aura but that was actually not the story I was going to tell.

A month later I receive a Christmas card from Alex.  He has something interesting coming up.  Time passes. We do not hear from each other in a while." 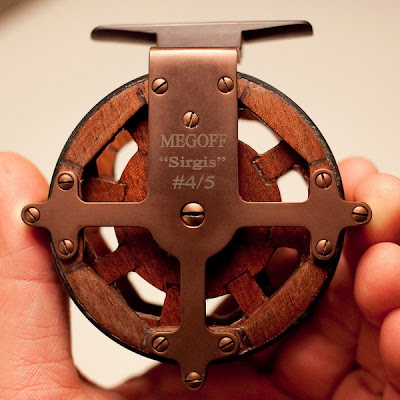 "Today I received a small package from Alex Kaplun, Kharkov, Ukraine.  It’s a small wooden trout reel.  Not exactly what one would imagine from an aerospace engineer from the former Soviet Union.  It’s obviously his interpretation of the old starback reel.  It reminds me of the filmmaker Andrei Tarkovsky.  Down to earth, a bit rough, with an air of medieval science.  Still very spiritual and almost a religious artifact.  The drawings of Leonardo da Vinci, ancient craftsmanship.  A complex, associative, and pleasant experience.  It’s soft and warm in my hand.

Fragile? Perhaps.  That’s the way she is, mother nature but oh, so beautiful..."
Posted by Cameron Mortenson at 9:00 AM

e.m.b....thanks for the comment. I really enjoy posting up Christian's stories for T.F.M.

Dear Christian
Thank for a good revue about my work.
It was very pleasant for me.

Alex...thanks for leaving a comment. I find your fly reel designs to be very interesting.

Cameron
Thanks. Designing of new reels is more interesting for me,
than to make thousand identical reels. Now I am very much interested
by classical old and rare English reels.
Therefore, has appeared this Sirgis reel. Now I'm designing new
wooden salmon model.