As soon as Koz and I were off the brook trout stream, he led me to the river access where Jason Tucker of Fontinalis Rising and Phil Croff of Croff Craft Custom Driftboats & Oars were waiting with his newest driftboat which was already in the water ready for a night float.

Jason and I have traded emails and phone calls for months now and I really like the direction that Fontinalis Rising is going.  Jason consistently offers up excellent content and it's neat to see his northern Michigan fly fishing adventures when I'm five gas tanks away from my native state.

I had never met Phil before but Jason had talked about him and what he was doing with Croff Craft quite a bit.  I was really excited with the offer to float one of their home rivers for night time brown trout and check out his uniquely designed driftboat. 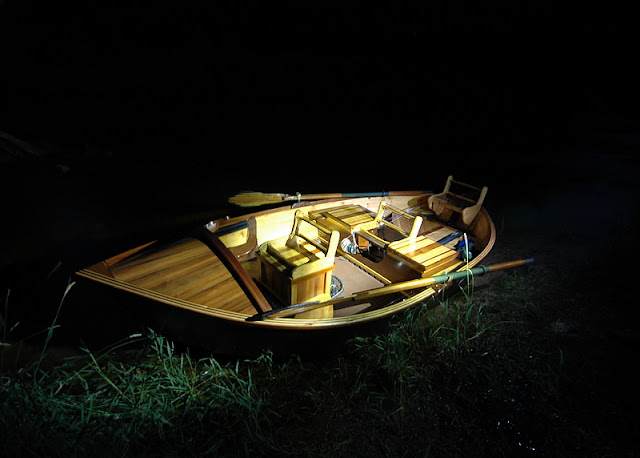 Over the past couple years Phil has been building short and wide designed driftboats that are great on all water types but especially suited for small rivers.

All Croff Craft driftboats are built by Phil and literally have hundreds of hours into each one before completion.

A couple of the fellows that were aware of where we were floating were a bit skeptical of running a driftboat down the river and even more so doing it at night.  The river is tight and as is typical of northern Michigan rivers there is structure lining piled in the corners and in quite a few places trees growing across and fallen down into the water creating hazards to navigate.  It was little worry as the Croff Craft is the perfect drfitboat for tight water situations and Phil's knowledge of the river is unmatched as well. 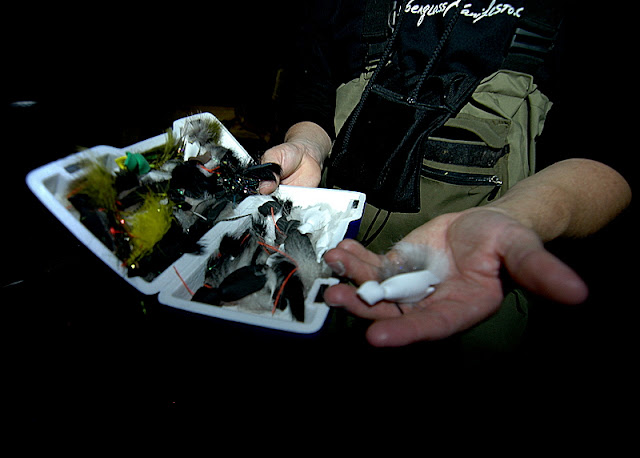 As I was assembling my gear for the night Jason opened up his fly box full of junk which largely consisted of foam, bunny strips, and flies with stinger hooks and offered up one of his white foam gurgler type flies for me to try.

I didn't have any experience with mousing and was a bit surprised that the technique used was a cast as close to structure on the opposite bank and then slowly swing the large dry fly across the river.  It was seldom that I added much action to the fly at all and the brown trout responded to this fly consistently all night long.

Within the first hour of our float I took one step forward in ankle deep water which was in front of a narrow island in the river and was swallowed by a deep hole which filled my waders and left me waterlogged for the rest of the night.  Phil came prepared with an extra sweatshirt and wool gloves which took the edge off as it cooled down.  I felt like an idiot for taking a dip and should have been more careful.  Lesson learned all over again. 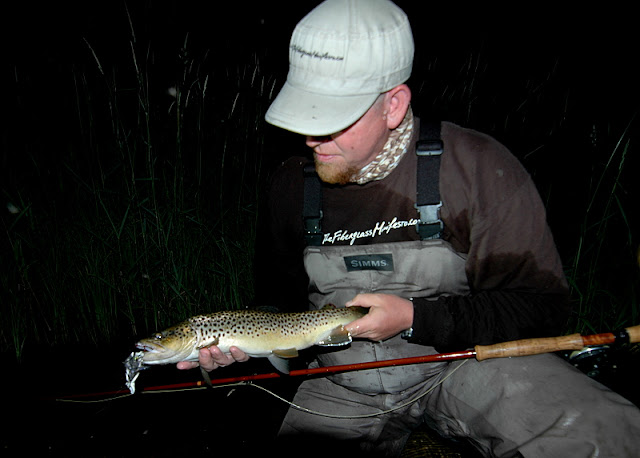 Over the length of the float we all rolled a few good fish and I was fortunate to catch an eighteen inch brown trout that rose to the swung gurgler pattern as it swam through the middle of the river.

I was pretty stoked with the the catch and spent the rest of the night at the front of the driftboat taking suggestions from Phil and Jason on where to cast.  The McFarland fiberglass seven weight paired with a vintage J.W. Young Landex made for a great mousing outfit.

I had gotten just a couple hours of sleep the night before, fished most of the day, put in six or seven road hours, and as our float edged into early morning I more or less drifted in and out of some sort of consciousnesses.  This lack of sharp response aided in my inability to connect with a few rises in the dark but no less took away from the experience of drifting down the river with Jason and Phil.  We had an excellent time even if I was half asleep part of the time.

We ended up at the take out about five o'clock in the morning and it was getting light out before I fell asleep for a couple hours of rest before the next adventure started.

Add Fontinalis Rising to your regular online read list and give the Croff Craft website a look as well.  Besides making a very capable and beautiful driftboat, Phil is also a licensed fly fishing guide.  I can attest that he knows his home waters quite well.

Jason and Phil...thanks for a great time on a very special piece of water and having the front seat to the Croff Craft for the night certainly added to the experience.
Posted by Cameron Mortenson at 10:00 AM

I see you have some Simms waders, are those the Blackfoot model? If so how do you like them?

Jordan...Tommy Lynch does look like he has fly fishing at night dialed in.

Dan...those waders are the Simms Lightweights. I've had them for over five years and they have been great.

That is pretty cool Cameron!! Sounds like that McFarland was the perfect tool for the job (that, and along with a multitude of other jobs). I've been lucky enough to be in a situation where I've had trout hammering mouse patterns...there's nothing sweeter then seeing that wake and then the big snout inhale the mouse.