A Weekend At Voelker's Pond

It hardly seems possible that it's already been two weeks since I spent the weekend tucked away in the wilds of the Upper Peninsula of Michigan at Voelker's Pond.

As a native son and fly angler there are few places in Michigan that are as mythical as the place that John Voelker, who is also known by his pen name of Robert Traver, went to be inspired, to fish, to drink, to write, and to spend time with friends.

There was certainly something special about being at the camp all weekend but the experience was heightened by having Adam Tsaloff as my host.  As John's grandson, he spent considerable time with him and had wonderful and interesting stories to share. 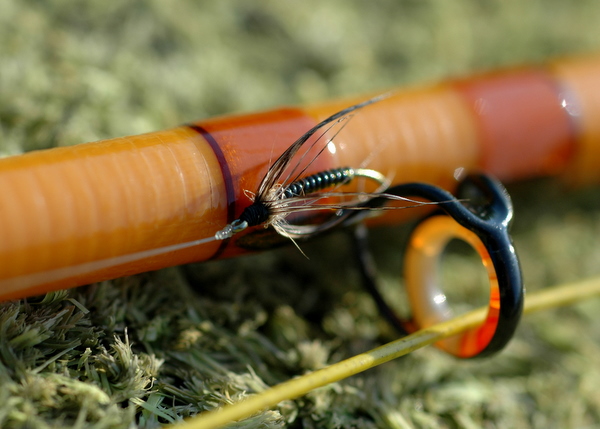 We arrived on Friday evening and I quickly readied my gear before walking off to explore the pond a bit.  Adam directed me to one of the raised casting platforms, this one being called the Diving Board, and said to cast across and near a downed tree.  I stood at the edge of the platform and cast a dark bodied soft hackle that I had tied some time back into the dark waters of the pond.  Before long I felt a take on the fly and moments later a brook trout came to hand.  I was done for the night.  I felt complete.  I had caught a brook trout from Voelker's Pond.

The rest of the weekend was spent near and around the camp fishing small brook trout water and then an evening on the Escanaba River as well.  Both mornings I woke early I walked around exploring the with camera and fly rod until the bell above the cabin was rung for breakfast.  Of course we ate to good all weekend which is certainly just a given when at camp.  We stayed up to late at night talking about bamboo and fiberglass fly rods around the fire or driving back from the river in the dark.  Each night I stretched out on the floor of the cabin with my last thoughts before sleep wishing the walls could whisper voices from the past and I could hear the spirited conversations with John and his friends playing cribbage and raising a cup in laughter.

It was a weekend well spent and I want to thank Adam again for the gracious invitation to visit Voelker's Pond.

View all the images from this weekend in the Flickr album.

Some GREAT shots Cam. I have multiple shots of that plant growing up through the missing knothole on the boardwalk as well; delightful image. Thanks for not getting any shots of my phat ass in there, I look down right svelte with the hands on cooking pics! Also thanks for getting his bassholiness the Prince of Piscatoria in lovely ass enhancing chino shots. He'll be so proud.

Great stuff as usual! A little love for my home... Michigan. Thanks!

Cameron, with this post you've finally arrived as a true photojournalist.

Great photos and a storied place. I haven't seen your host in many years, but he is a heck of a guy.

What make and model is the glass rod (yellow blank) in a couple of the photos? Cummings?

Thanks for your great posts.

Jeff...thanks. This trip made me seriously miss living in the Mitten.

Kevin...thank you for the kind words.

K.F...the fly rod in the photos is from Graywolf Rods and the blank is made for Shane by McFarland Rods. An unreal nice four weight that matched perfect with the fly reel and a 4DT silk fly line as well.

voelker is my favorite fishing writer, hes the reason I started fishing the UP. never fished the pond though. would love to.

Pat...he certainly could put words together. I appreciate his writing quite a lot as well. I was very fortunate to get an invite to the property. One of the most special fly fishing memories that I'll always cherish.

Looks like the perfect day and beautiful scenery!! There is nothing like pictures to be able to look back and remember the feeling of being in the great outdoors and being able to share the pictures with everyone is so amazing. Thanks for reminding me why i love the great outdoors!