As they say, all good thing must come to an end but in the case of my twelve day trip to Michigan, ending the trip on Beaver Island could not have been a more perfect way to wrap things up.  We didn't tangle with any carp but the smallmouth experience was otherworldly.

When Steve Martinez of Indigo Guide Service invited me along for a day on the water I knew that I had to take advantage of it. I had kept up with Third Coast Fly's Operation Michigan Tropical blog posts and other internet postings about the surreal carp and smallmouth fly fishing on Beaver Island.

Adam and I arrived at the Charlevoix Municipal Airport to find out that Beaver Island was socked in with a heavy storm and cloud cover which only held us up for an hour or so but was downright agony as we were ready to be there. 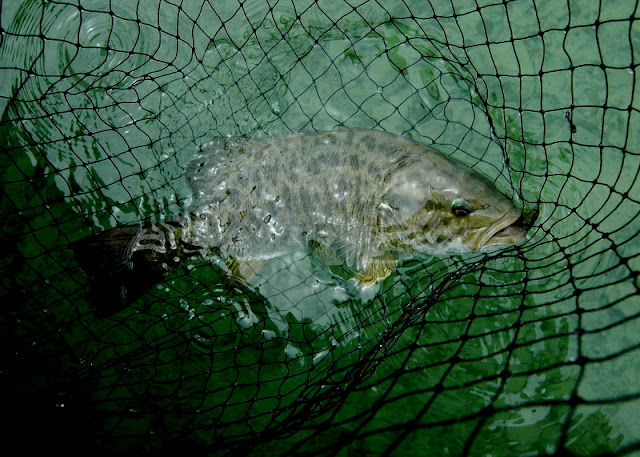 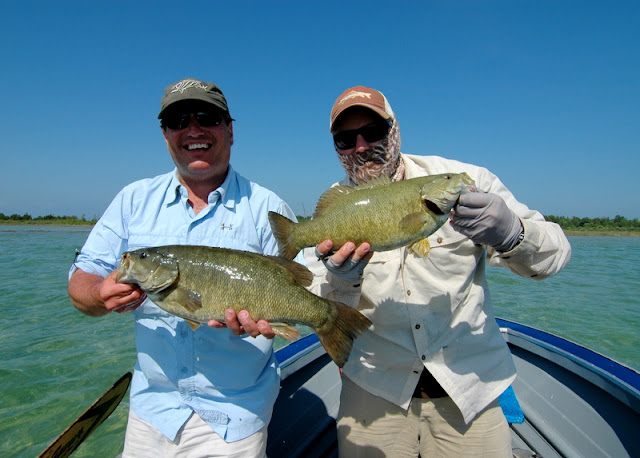 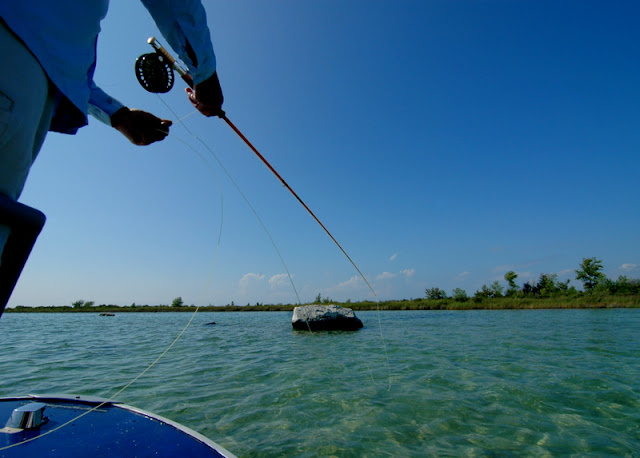 All photographs from this trip can be seen in this Flickr album.

When the weather finally opened up it took just twenty minutes before we were on the ground on Beaver Island. We found Steve waiting for us and after a quick handshake and introductions, we loaded our gear, and were off to pick up lunch and put the boat in the water.

Once we were on the water Adam and I lined up a couple fiberglass fly rods each and had our bases covered from six weight to nine weight.
The morning and into the early afternoon started out a little tough since the storm system was still whirling it's way around the island and made it tough to spot fish until we were nearly on top of them.  I had some limited success laying a fly down in various rock piles and would feel the tug of a couple pound smallmouth on the other end.  We found a few carp as well but they were uninterested in our flies or spooked when they saw the boat.

What was undeniable is that Beaver Island and the surrounding islands are beautiful with water in shades of blue you may have never seen before or realized were possible in freshwater.  There are 600 or so residents who call Beaver Island their home and they really have a secret kept here.

In the early afternoon we anchored the boat in a small cove, ate lunch, and discussed the options for the few hours we had left before we needed to be back at the airport.  Steve had gotten the sense that catching a carp would be neat but Adam and I were totally dumbfounded on the smallmouth.  He suggested that we work our way back through three large flats areas where we had seen a few smallmouth during the morning and figured that now that we had full sunlight that we'd be able to sight fish for them.

With lunch over Steve motored us back to the first flat and as we approached shut the engine down and jumped on the sticks.  When we were still a couple hundred feet out he said "There they are."  Smallmouth which looked like black submarines just under the surface dotted the flat in groups of twos, threes, and fours.  Adam and I both scrambled for our six and seven weights and got ready to drop flies in their faces.

We spent the rest of the afternoon picking out a single fish or a group of fish, casting a weighted eye bugger type fly in their path, and would immediately see the smallmouth react to it.  Sometimes two or three fish would all be zig zagging after the fly and then one would break from the pack and suck it in.  Other times a smallie would follow, follow, follow, and turn away at the boat.  It was wonderfully intense fly fishing at it's best.

With a plane to catch and not wanting to push our luck with missing our flight, we put our fly rods down completely satisfied with the day and Steve quickly motored back to town.  We were the last passengers back to the airport and scrambled to get our gear broken down and loaded on the plane in time.

Adam and I flew back to the mainland without saying to much to each other since I guess we were both stupefied by our fly fishing experience on Beaver Island.  Adam made a comment to me as we got of the plane wondering if what we had done was real or not.  Was it all just a dream?

If you are traveling to Michigan mark a day or two off and visit Beaver Island.  It is accessible by ferry or by plane.  It is a great island community with places to stay, to eat, and fly fishing with Indigo Guide Service is exceptional as well.

Follow the exploits of the crew at Indigo Guide Service on their Third Coast Fly Blog and on Third Coast Fly Facebook page as well.
Posted by Cameron Mortenson at 9:00 AM

Stupefied!! awesome, awesome, AWESOME- nice read and great trip, thanks for taking us along Cam!!

Sweet! Looks like a fun trip! Thanks for sharing.

Koz...I hope I wasn't to over the top with the descriptions but the smallmouth angling there is amazing.

Cam is not exaggerating. If anything it sounds as if it was a slow day, and I don't say this to detract from his experience. Smallmouth are way under utilized in MI, and the BI archipelago is remote enough to be that much more fantastic. And the scenery....

Wow, those are some nice fish! It reminds me I need to get out for some smallmouth soon....just gotta figure out the bast place to try for them in the area.

What a awesome experience! Beautiful water and beefy fish! cool!

Great, great, great entry, Cam. I love the pics. And those are some serious fish. Brilliant one...!

And so the internet ruins another top secret... awesome. :-/

FR...I do believe if we would have had full sun all morning into the afternoon we would have done quite a bit better but I'm seriously happy with the trip.

GFP...find them. Smallmouth on the fly are so fun.

Mark...I was really surprised how large the fish were. Brutes.

Harold..."ruins another top secret"? That might be a bit harsh since it's not easy to access the island or even know where to look for the fish. Kevin and Steve have been dialing B.I. in for a couple years now to figure out the game.

The rest were 2-5 pounds and saw one pushing 8? Think you guys need a scale, instead of estimates!