Jason Tucker of Fontinalis Rising recently returned from a trip to the Nipigon area where he and his brother fished for big Nipigon brook trout in the Ontario wilderness.

Jason sent in this T.F.M. Spotting Photo Contest submission and video of a large brook trout caught during the day on a mouse pattern while wearing his T.F.M. hoodie.  Though the T.F.M. logo isn't visible in the photograph, it is clearly shown in the video. 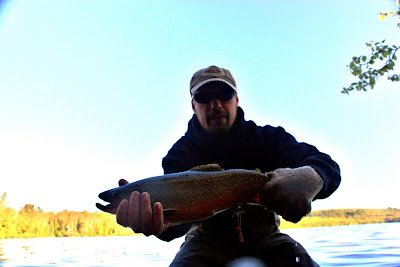 Jason wrote...  "I went with my brother in August to Nipigon in search of its legendary brook trout.  We weren't disappointed.  While we didn't catch a lot of fish, the ones we caught were in the 16-21 inch range, and I broke off one that was at least 5 pounds.  The scenery was incredible, the weather beautiful, we saw bears and moose, and the loons serenaded us every night.  While it's located on Highway 17, Nipigon is still one of those quiet small towns where the locals are friendly, and you can go and lose yourself in the back country.  The standard fly patterns- big sculpin streamers and cone head woolly buggers- weren't producing at all that week and so I used some of my favorite patterns- Au Sable skunks, and mice, to take some pretty nice fish.  I'll definitely be going back."


Check out Fontinalis Rising website for more on the Nipigon trip and other goodness as well.
Posted by Cameron Mortenson at 7:00 AM