Jason Inman has got a good thing going that he gets a new fly rod with every child that is born into their family.  Here is the story of his latest fly rod build named after their recently born son, Roy Carrick. 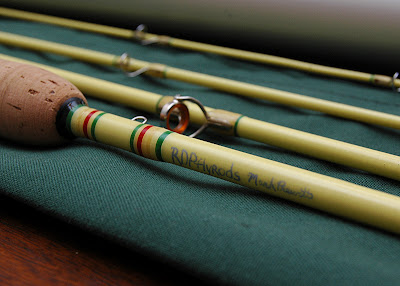 Jason wrote...  "I will give you a bit of the story.  My wife let me get a custom fly rod named after our firstborn a couple months after she was born around Father's day.  I had a guy in Missouri named Mark Prewitt build it and he built me the "Merci Raegan" which turned out to be a really nice 7'6" four piece four weight to all of my picky specs for only about $140.  He mostly builds graphite and cane and that rod build was graphite but wrapped similar in pattern to my vintage Browning Silaflex fiberglass fly rod." 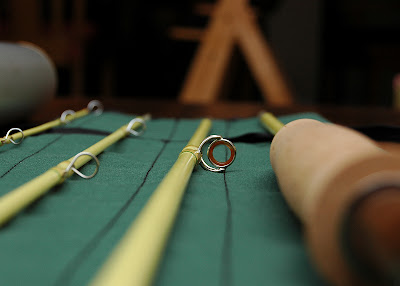 "Fast forward and we had a son about seven months ago.  Not long after I started shopping for a fiberglass rod or blank for a fly rod that would be the "Roy Carrick".  Well, after school loans, a mortgage, two young kids and two dogs there isn't much dough left for fancy fly rods.  However, my taste in rods turns out to be fancy.  So, I began a search for affordable yet tasty classic components.  I found a factory second Nori clone supposedly rolled in the Nori factory set of spigot ferruled glass blanks on ebay for $11 including shipping.  I then found a nickel silver and agate stripping guide for about $15.  Next, a couple weeks later I purchased a nickel silver and circassian walnut reel seat.

Finally, around Father's day it was time to start emailing Mark at RDP Fly Rods.  Mark endured about forty emails from me describing silk wraps, rods I'd seen here or there, the philosophy behind the rod, how it should be playful yet bold and daring like my son.  I rambled like I am now." 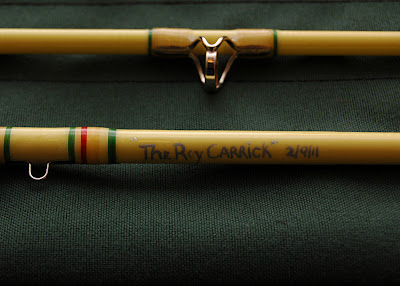 "In the end, Mark produced a beautifully wrapped and finished Nori clone four piece 2/3 weight fiberglass fly rod with vintage yet modern silk wraps, a rod sock and an aluminum rod tube for...well...lets just say he gave me a good deal.  His price for a build with supplied blank is $100 without a rod tube.  I can't say enough good things about how custom and awesome the process is to build a rod with Mark, on top of that it's perfectly affordable for a young guy like me with a family.

All said and done I got a rod I am very happy with what feels very fun and very classic for about $155." 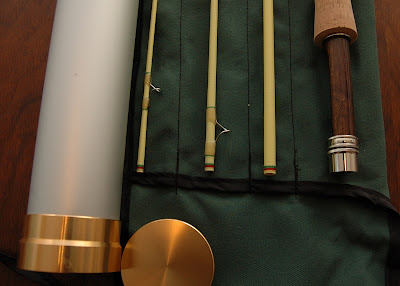 Jason...looks great but I'd warn against having more children just to get another fly rod. It can get very expensive in the end.
Posted by Cameron Mortenson at 8:30 AM

Yeah, let's wait a couple years before we need another fly rod :) Enjoy your son and your rod, Jason!