No trip is complete to my native state of Michigan without at least a day or two of fly fishing and as plans were firming up to be at the Midwest Fly Fishing Expo I shot Steve Martinez of Indigo Guide Service an email to see if he had a couple days open to look for steelhead on the Pere Marquette River.  He blocked off the days and we both hoped that a few fish would be pushed up in the river by the time the trip came around. 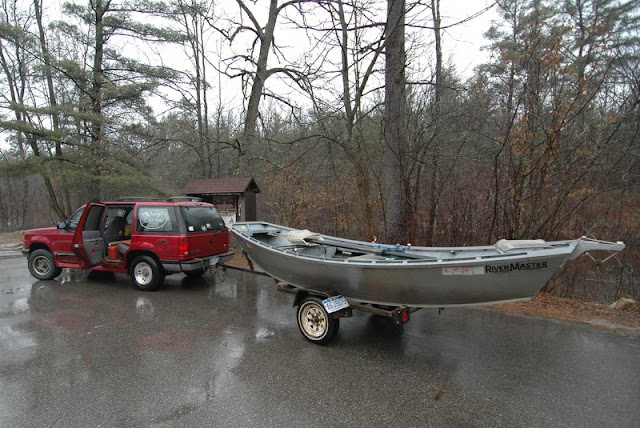 Monday morning was one of those gray days which are typical for a Michigan spring days where you can get pissed on all day long and we did.  The rain came in waves of a light mist to a full on pour.  Oh well...this is steelhead angling. 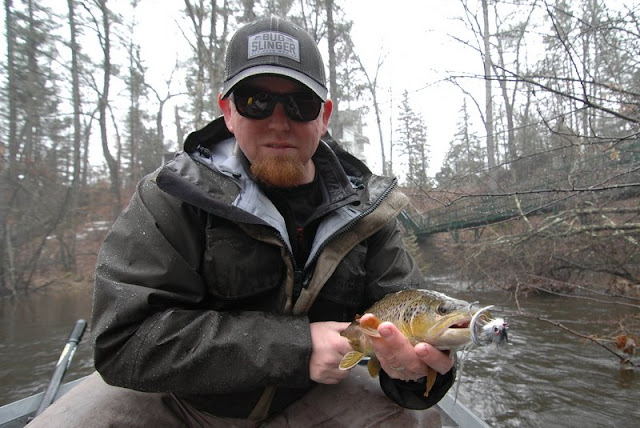 Our tactic for the day was to bang streamers on the edges while moving down the river to places Steve suspected held steelhead.  This worked and we moved a few decent brown trout along the way.  It's thrilling to see a golden shape emerge from the river bottom and slash at the streamer even it they don't connect. 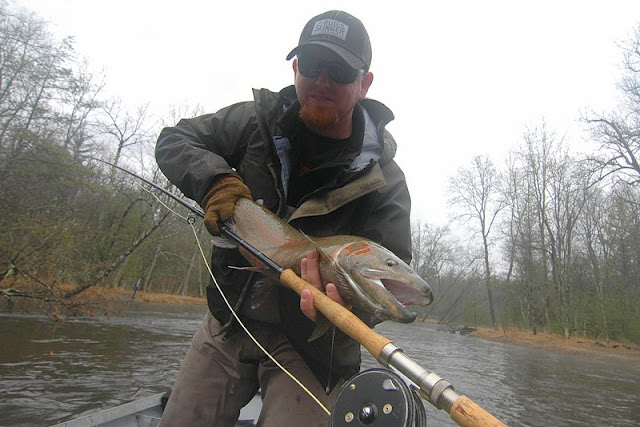 By early afternoon Steve and I had both tangled with a few steelhead that had bumped off the hook before coming to the net.  I moved (and missed) a steelhead on my very first swing which I felt was likely a bad omen for my plans to catch a steelhead on the swing with the Scott Fiberhammer.  I did end up nymphing a solid steelhead which was a good time but I ended up feeling a little dirty afterwards.  I was there to swing one.

Late afternoon found us between Green Cottage and Gleason's Landing on a long run with a lot of fish scattered over the river bottom. I was nymphing an egg and caddis larva setup and after getting a couple bumps as the flies began to swing, I wondered if I could take one on the swing.  I quickly switched up to a sculpin pattern with a trailing egg that Mike Schmidt of Angler's Choice Flies had put in my hands knowing I was coming to the P.M. 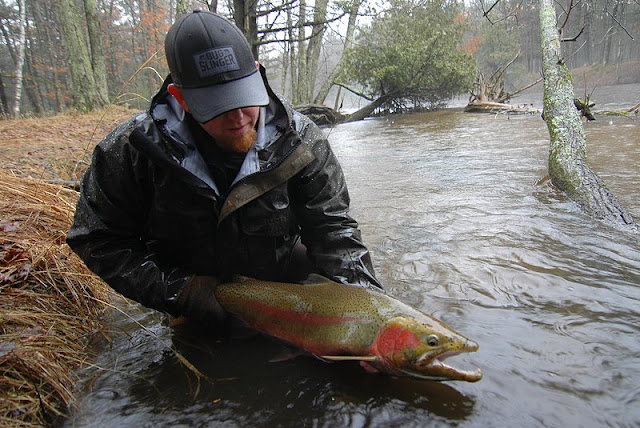 It didn't take but a couple dozen swings when I felt a jolt on the end of my line and a steelhead buck thrashed the surface.  A second later he was a hundred feet down river and in the air.  Splash.  I had one on the swing and the Fiberhammer was buckled over with the over sized vintage J.W. Young clicker screaming as the steelhead sped downriver.

What happened over the next ten minutes should never have played out as it did.  The clicker reel that I was using didn't have both pawls engaged which meant that I really didn't have enough drag to slow this fish down.  I attempted to use my fingertips on the spool during blistering runs and my knuckles took an expected whacking.  The other thing working against me was that I had used a section of eight pound tippet to connect the fly to the leader and I am really surprised that between rubs on rocks and wood in the river that the buck didn't break me off.  As Steve netted this steelhead there was a moment of disbelief that this had really happened at all.  I swung one, and a decent fish at that, kind of against all odds. 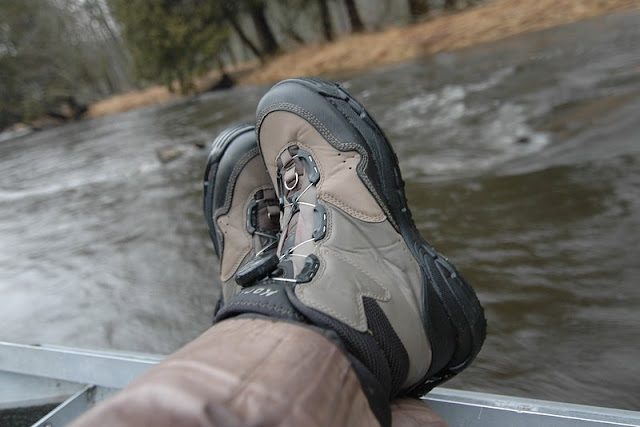 I sat back with my boots kicked up enjoying the rest of the float in the rain with a satisfied smile on my face.  I had swung my first steelhead and on glass at that.  I was stoked.

After getting back to the house and cleaning up, Steve and I met up with Matt Dunn of fishbeer.com and Alex Landeen of Fat Guy Fly Fishing at a pub in Ludington and some hijinks and maybe a bit of over indulgence ensued.  Matt and Alex are seriously good people and it was great to put a handshake and a cheers with pints with fellows who I've followed online for the past few years.

A good day all around that couldn't have played out more perfectly if I had scripted it start to finish.
Posted by Cameron Mortenson at 9:00 AM

Cook and the Fly said...

Gleason's Landing, Green Cotage...wow, it felt odd saying those names again after all these years, specially being down here in Southern Baja.
Had many, many great days on the PM; got my first chinook at Whirlpool!
Thanks for the beautiful story and pics.

Pretty sweet Cam. I've set swinging in my sights. What a great fish, and riveting story.

That's what I'm talkinaboud! Story & pics me back a good bit so thx for that! Mike

found ur blog through him

Cook and the Fly...Michigan to Baja is a stretch. Thanks for the comment.

Howard...you make it sound like I can't fish. HA... It was good to touch a few this trip no doubt.

F.R...it was fun to nymph a few fish but I really got excited about swinging the two that I did.