As someone who constantly has his ear to the ground on what is going on in the fiberglass realm of fly rods, I have to say that Redington did a pretty good job keeping their soon-to-be-released Butter Stick series under wraps.  Prior to the official press release, I had heard just a single rumor of this series, and though I was excited to hear that Redington might have something in the works, I had a hard time getting any information on this possible new offering once I heard it.

A few weeks went by, and more information started coming out about this new series of fly rods leading up to IFTD.  I was also contacted about doing a review, and soon after, a package from Redington arrived on my doorstep with a three piece six foot three weight Butter Stick inside which was matched with a small Drift fly reel and a RIO Products fly line.  A complete outfit ready to cast and fish. 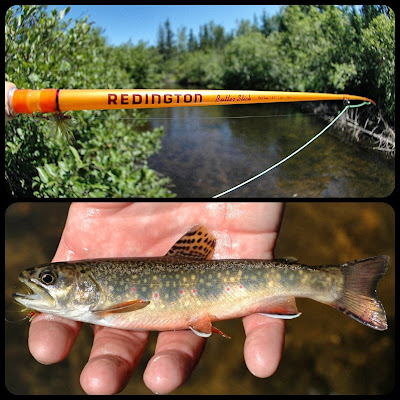 Reading through press releases is fine (though the Far Bank companies do get a little carried away with their hyperbole sometimes...) but I'd much rather go hands-on with a product, and the Butter Stick was no different.  For the past month or so, I've been in the yard, a few nearby ponds, and most recently on a little brook trout stream in northern Michigan with the Butter Stick and have had a good time with this short, little three weight.

One of my biggest fears with any new glass series is that the tapers and actions will be deemed too fast for the casual glass angler.  If this six foot three weight is any indication, than Redington seemingly got it right with the Butter Stick series as far as feel.  The Butter Stick three weight has more than enough flex but also enough backbone to hit targets accurately thirty, maybe even forty feet and under.  Once I got this fly rod on moving water, I was also impressed with it's roll casting ability in close.  It's possible to pick apart a small stream with this little three weight, rolling casting a dry fly or hopper, hitting the edges, undercuts, structure, and riffles all without putting your fly in the air...and into a nearby alder.

Redington calls this series "slow action", but in fiberglass terms, it's squarely medium all the way.  This isn't the most favorite glass three weight I've ever cast, but it's still a lot of fun for what it is as a short, capable three weight wrapped up in an attractive no-nonsense fly rod with a price point that won't break the bank.

This six foot three weight will be a perfect fit for cost-conscious anglers who fish small creeks and hidden-away blue lines.  Match with a small clicker (the Drift 2/3 fly reel is a great choice), pack a box of dry flies and small terrestrials, and the day is made for sipping trout and good times.

PROS
- Redington didn't go to fast with this taper and it is a likeable action.
- Surprisingly reaches past casting distances that you'll likely ever need a six foot three weight to go.
- The series name "Butter Stick".  I think it's fun and the build cosmetics fit the name perfectly.
- It's great to have yet another choice with a series of glass fly rods in the lower end of the price spectrum.

CONS
- Price.  I would have liked to see this fly rod offered at a price point at or under $200.

The Butter Stick series consists of five fly rods covering line weights two through five weight and will be offered at a price of $250.  These fly rods include alignment dots, a fabric rod cloth, Cordura rod tube, and a lifetime warranty.  Butter Stick series fly rods should be available online and through your local Redington dealer sometime between August and September of this year.

Thank you for the review. I agree about the price. That is too much for me and I'm a Redington fan.

Thanks for the great review. I really like the name of the rod. I think I'll keep my claw though...

Nice review. I'm not any kind of glass expert, but I think there's still room in the Redington lineup for another glass rod priced around $100: the Margarine Pole. And it'll be grey.

Margarine rod that casts as smooth as butter. I'm with you there Kirk.
RFMcD

Nice to see them giving glass a go. I'm not going to complain on price, but glad you called it out as a con and didn't simply wax poetic. Maybe not the rod for me, but I think many will find this an attractive option on name & looks alone.

OBIF...it's tough to beat the Featherlight.

Michael...unless a gear item is completely flawless, which rarely happens, there is always a CON or two to mention. I try to make these gear reviews as balanced as possible and see what I am reviewing not only from my perspective but how others would perceive it as well.

I can see the tagline now...

I can't believe it's not butter!

They should hire Fabio.

Uplocking reel seats are a non-starter. For a trout rod, all you need is a nice butt cap (I prefer the footed type) and sliding ring over cork.