If you've been following the news at all then you know that the northern Front Range of Colorado has been struck with massive rainfall and flooding that was first described as a 100 year event, then a 500 year event, and as of this morning it is now being considered a 1,000 year event.  No doubt, it's bad. 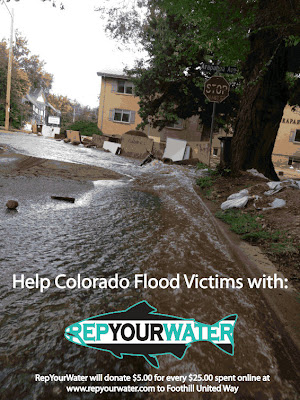 Rep Your Water is doing their part to help the flood victims and are donating $5.00 from every $25.00 spent online to Foothills United Way.

Been thinking about a Bluegill cap?  Now is the perfect time to pick one up.  Rep Your Water is running this donation until the end of September.

Check out the Rep Your Water website to place an order and to check out their ever growing selection of caps, t-shirts, and other gear.
Posted by Cameron Mortenson at 7:00 AM

This is great. I'm gonna pick up the shirt.