This past fall I was able to spend a few days banging around the rivers near Missoula with Joel Thompson of Montana Troutaholic Outfitters and we spent a couple days in their new Flycraft USA Stealth raft.  Truth told, the Stealth is actually Deb's, Joel's wife, that she received as a surprise for a noteworthy birthday.  She was gracious and allowed us to borrow her raft as long as we promised to bring it back clean.  Which we did.  Mostly.

Judging from the emails and comments on social media that I received after posting a few photographs of the Flycraft Stealth while on this trip, there is a lot of interest in this raft and I thought I'd jot down some high points and considerations for those in the market for a raft in the coming year. 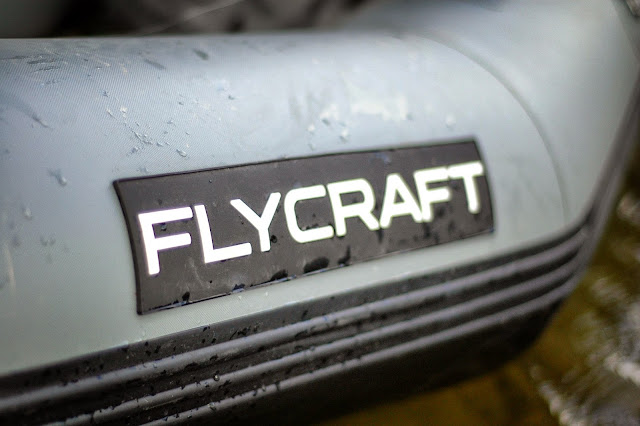 Here's a quick list of positives on the Flycraft Stealth...

SIZE - From the outside looking in, the Flycraft Stealth might look a bit small but once you get seated you find that everything is very well laid out and you have more room than first thought.  Everything is within an arms reach of the rower's seat and the front seat angler has enough room to keep a gear bag underneath for quick access.

The Gear Basket on the back is a must and gives you a solid platform for attaching gear bags, lashing extra fly rods, and a cooler.  I wouldn't order a Stealth without one.

STABILITY - The Stealth is what I would consider a low profile raft with frame for the rower seat at the top of the raft and front passenger seats up above a bit.  This gives the front passenger some height to keep his back cast out of the way of the rower's head and it's a really comfortable seat position being up just a bit.

The Stealth is really stable from either seat and I was really impressed with how good it felt.  This is a really easy raft to fly fish out of and it's a good time.

Like any boat that you get in for the first time it takes a few minutes to get your bearings but it wasn't long before I was standing up while we are underway with no issues at all.  The Stealth's inflated rigid floor is comfortable and gives more than enough support for standing up on.

Sitting or standing, the Stealth wins.

MANEUVERABILITY - Joel mentioned it over and over, and I found it as well when I was on the sticks, that the Stealth rows really well as it sits ups high on the water, drafts very little, and is super easy to maneuver.  I don't have a lot of experience rowing but found the Stealth to be easy to learn on.  Consider this a good raft to cut your teeth on if you've never owned a raft before.

DURABILITY - Having a few days to kick the tires on the Flycraft Stealth, I was impressed with the build quality of this raft in every respect.  The Stealth is made to last from the frame to the welded heavy duty PVC raft construction.  Everything fit together nicely and I really liked how the internal anchor system worked.  There are a lot good ideas packed into the Stealth package.

The only thing that would take some getting used to is the entry and exit for the one rowing as the raised frames for the oar locks make it a little tricky.  Nothing that can't be figured out with a bit of practice.

WEIGHT - One of the deciding factors for Joel in purchasing this raft for Deb was that she would be able to load and unload the Stealth on top of her Subaru alone or with a friend with little problem.  Weighing in at just over 100 pounds with the gear basket, we had no problem getting the raft up on top of the rack on Joel's full size pickup truck.

Carry handles are in just the right places and carrying and loading the Stealth is pretty easy all things considered.

Something else that we were both impressed with is that running the raft on top of the truck didn't affect the gas mileage at all.  This may differ with your vehicle but Joel's experience has been positive.

FUN - All told, the Flycraft Stealth is a lot of fun to fly fish out of.  It's just the right size for two anglers and gear and the new water possibilities are almost endless on where you can take this.  The ease of moving this raft around also gives a lot of options where you can launch as you really don't need a anything more than a path to the river to make it happen.

As a guide, Joel has plans to use this raft on floats that might be impossible for other crafts as well as one angler floats just to make things a bit easier for him.  No reason to take a full size raft or hard boat when the Stealth can get it done. 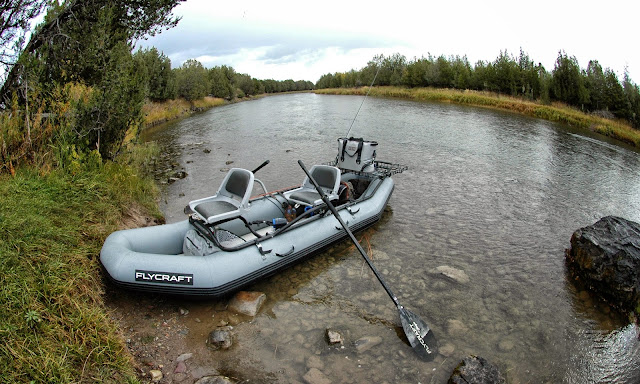 CONSIDERATIONS
RAFT FLOOR - The Stealth has a heavy duty PVC floor that is attached to the raft all the way around.  Please note that the Stealth raft floor is NOT self-bailing.  The thought process in this design aids in the ride, maneuverability, and draft of this craft but water that comes in stays in until you tip it on it's side to empty any water out.  This might not be a big deal if you're floating mainly flat water but if you take on a wave or through the process of getting in and out bring a lot of water into the raft then you'll want to stop and get the water out.

KNOW THY RIVER - The Flycraft Stealth is safety rated for Class II and below water conditions and I'd heed that advice.  With the low profile sides, the Stealth can take on a wave pretty easily which can be a real hassle and can border on dangerous if you try to take on rapids beyond what this vessel is rated for.

My recommendation would be to portage around a dicey sets rapids or consider exiting the Stealth, leash the raft with a long rope, and run it through short runs of rapids empty by walking it down the river. 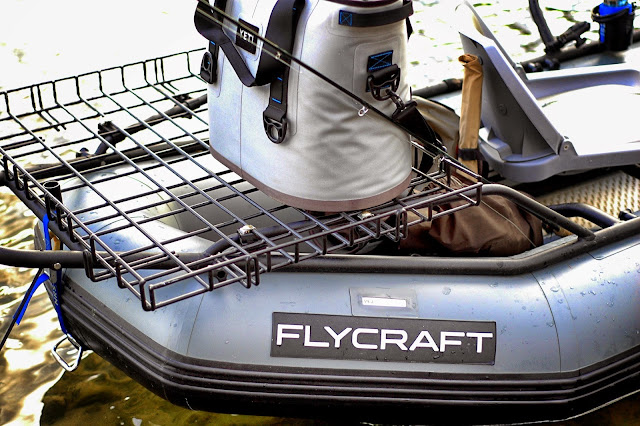 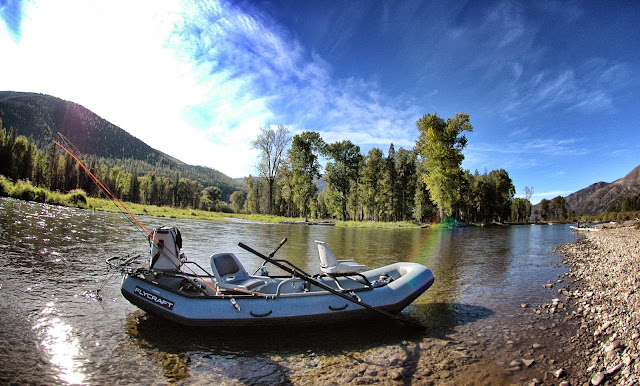 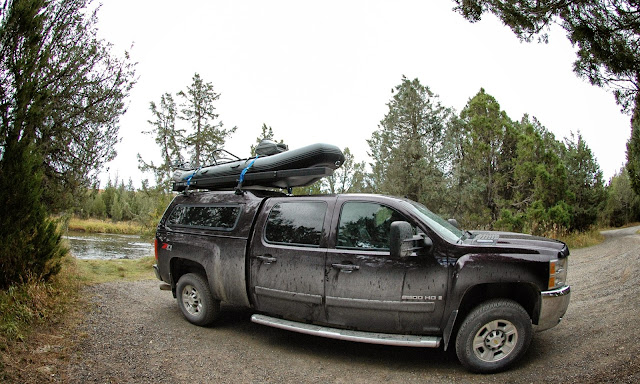 Flycraft has a lot of good things going for it with the Stealth and if you're looking for a solo or two person raft then this is one that you should certainly consider.

Ben Scribner, head honcho at Flycraft USA, is an email or phone call away and is happy to answer any additional questions you might have about his product.

how do you think it would do on the new river or the south holston when generating?

Patrick...I haven't been on either of those rivers to know. Sorry. I would say to watch that Class II rating. More than that and you are going to put water in the raft.

I was about to buy this boat and saw the white water ratings. Pretty bummed out that it can't take a higher rating. Looks like a fun boat but no ports for bailing and such a low rating stopped my purchase