Last week everything fishing, fly fishing, paddle sports, and outdoors was going down at the ICAST and IFTD show in Orlando.  It had been a couple years since I had last attended the IFTD show and it was certainly mind blowing to see the juggernaut that ICAST is.  There are hundreds of exhibitors and thousands of attendees which makes for a busy show floor. 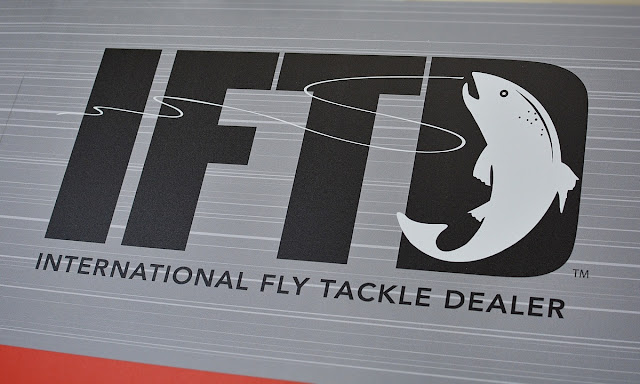 When it comes down to it for me, IFTD is more about networking and connections and it's really neat to piece together this small industry with relationships.  Sure, seeing all the new gear is cool but in the end it's the friendships that really matter.

That said, here's a baker's dozen of cool things that I saw on the IFTD side of the room.  There are certainly many more things that I could mention but here's what really caught my eye.

ASPEN REELS
There are handful of fly reel companies who make their reels in the U.S.A. that just don't get the notice that they deserve and Aspen Reels should be near the top out that list.  Aspen Reels are based out of San Marcos, California and like other reel companies making fly reels is just one part of a larger machine shop. 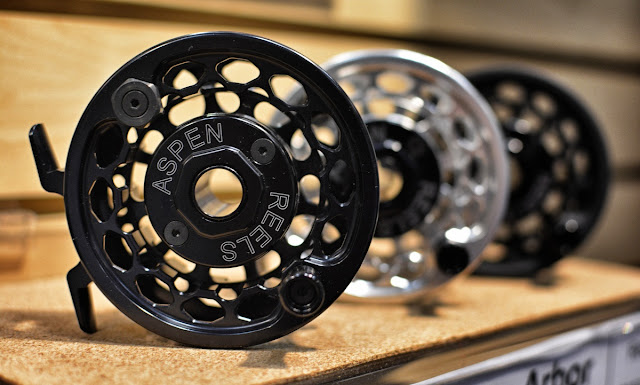 Each fly reel features a sturdy disc drag system of Teflon and stainless steel discs with a slightly over sized knob on the backside of the fly reel for easy adjustment on the fly.

There are three finishes available in both Mid Arbor Reels and Large Arbor Reels of Clear, Black, or Matte Black.  As much as I like shiny fly reels the Matte Black is my favorite in this sharp looking utility fly reel.  Another plus note, extra spools won't break the piggy bank either.

Check out the Aspen Reels website to see their fly reel offerings.  Hold one in your hand at a dealer near you.

BLACKSTRAP X TROUT UNLIMITED
If you're not familiar, BlackStrap have a long list of very cool Reel Tube Facemasks, Reel Sleeve Sets, and Reel Hood sun protection items.  Recently they linked up with Trout Unlimited to offer a series of items, priced $19.99 to $28.95, that include a T.U. subscription with purchase. 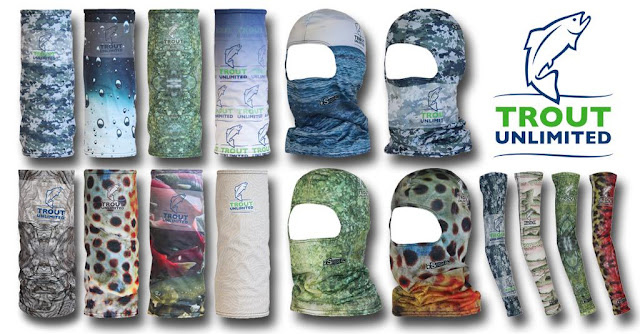 This is an interesting move on BlackStrap and Trout Unlimited since the free subscription has typically been linked to higher priced purchase such as a pair of waders and I hope that it takes hold.

Find the Trout Unlimited collaboration pieces online and at your local BlackStrap dealer.

FISHPOND
I have been a long time fan of Fishpond and every year they innovate just a little bit more than the last year.  I started Day 2 of the show at the Fishpond booth and was given the full rundown of new products from start to finish with the waterproof and submersible Thunderhead Sling, feature packed Summit Sling, and Drifty Boat Caddy topping my interest.  The Sushi Roll fly storage system will now be offered in three sizes instead of one as well. 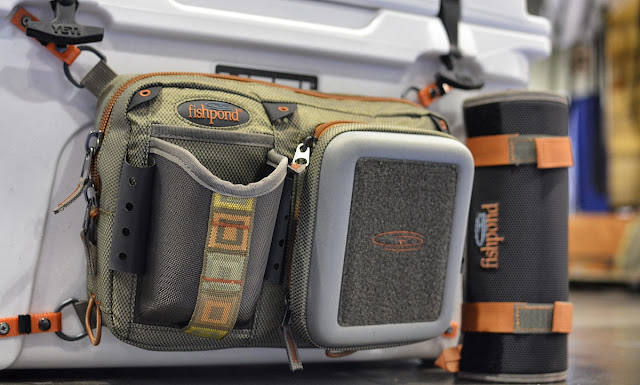 Check out the Fishpond online press release for all the images and information on the 2016 offerings from Fishpond.

FLOOD TIDE COMPANY
There is a lot of cool things happening in Charleston and artist Paul Puckett and his crew at Flood Tide Co. are continuing to grow this small business all the while keeping it irreverent and interesting. 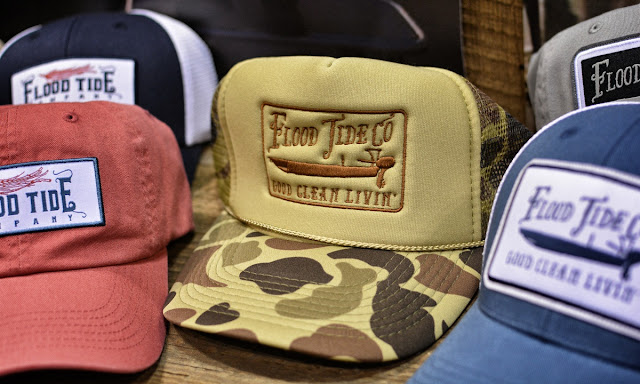 Check out the Flood Tide Co. website for the latest fashions, artwork, and tomfoolery.

HATCH OUTDOORS
It's no secret that Hatch Outdoors makes badass "Made In U.S.A." fly reels but they are now concentrating time and energy on adding a few tools to the mix.  This began last year with Nomad Pliers and new for 2016 will be the addition of premium nippers and a Knot Tension Tool which looks like it would also have a place in your back pocket just in case of a bar fight. 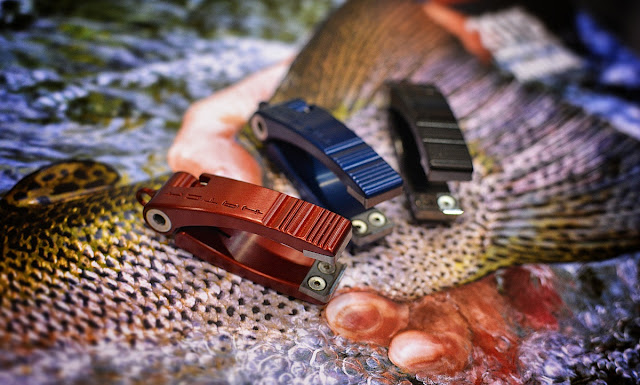 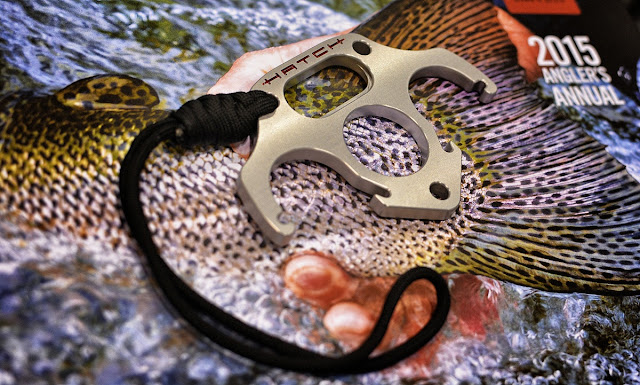 POSTFLY BOX
One of the surprises over the past year or so is the growing interest in subscription based fly services and Postfly Box tops the list for really well thought out fly selections, branded accessories, exciting collaborations, and each box includes a couple really fun decals as well. 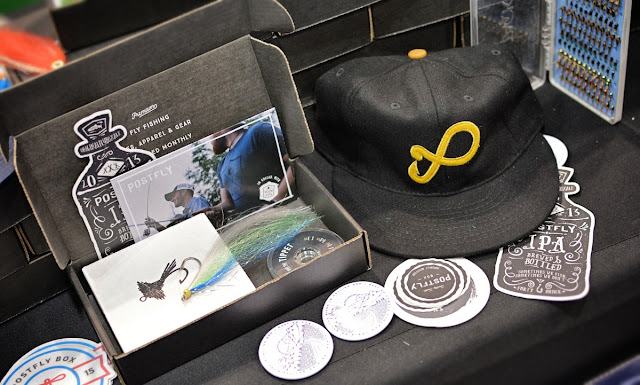 The folks at Postfly Box have a lot of plans for the coming year and don't be surprised if you start seeing these little black boxes in your local fly shop too as they make for a great gift buy on the way out the door for a friend...or yourself.

Check out the Postfly Box website to see everything that they have going on and follow along on their social media pages too.

RIO PRODUCTS - LIGHT LINE
I guess I shouldn't be surprised that with many of the fly rod companies offering fiberglass fly rods that the major fly line companies would also develop fly lines to match these fly rods.  One of the upcoming fly lines for 2016 is the RIO Products LightLine. 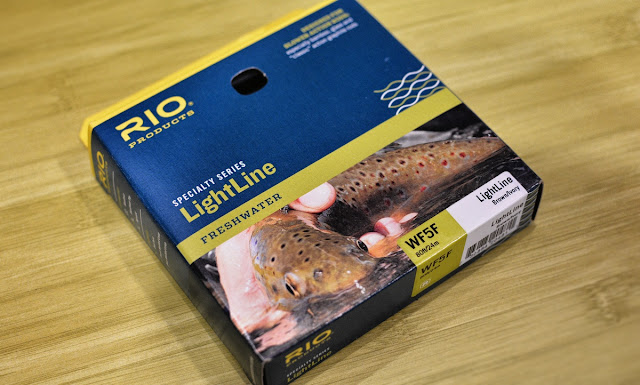 More on the LightLine and other new releases in the RIO Products press release.

RISING FISH ALUMINUM NETS
Dylan Rothwell of Rising Fish continues to expand the aluminum net offerings with several handle length sizes of the Lunker Net and now the smaller Brookie Net.  These are excellent nets that are study, lightweight, and capable of handling big fish in a boat or on foot. 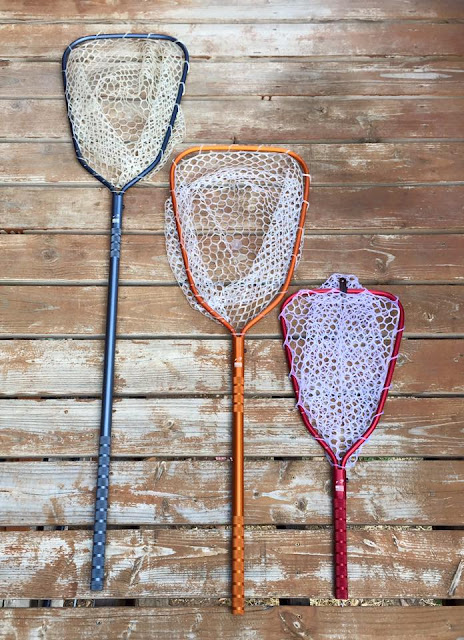 The aluminum nets are priced from $99 to $129, depending on the model ordered, and are available in a handful of colors.  Rising Fish is also able customize your net with laser engraving.

Check out the Rising Fish website for more information.

SIMMS WARRIORS & QUIET WATERS WADERS
One of the coolest collaborations that I saw while at IFTD were the camo front and custom patched Simms G3 Guide Waders that benefit Warriors & Quiet Waters with each sale. 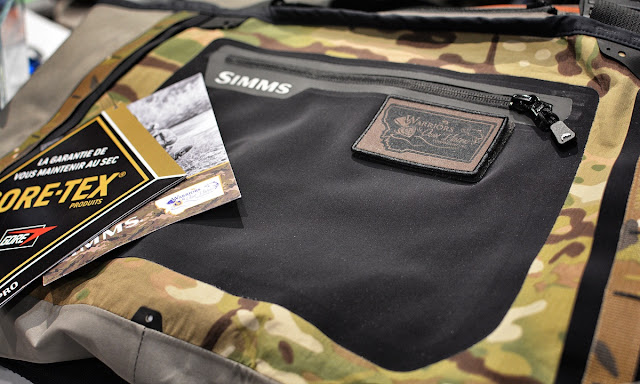 The Warriors & Quiet Waters feature everything that makes the G3 Guide Waders bombproof with camo pocket, belt loops, and top hem trims and a custom patch to top each pair off.

$100,000 from the sale of these Limited Edition waders will benefit this organization and will allow injured veterans guided and supported fly fishing experiences. 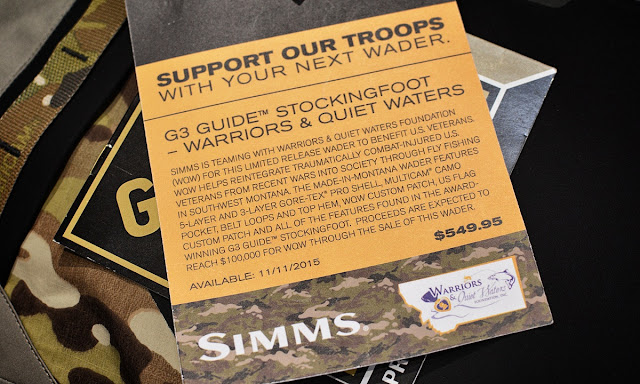 Looking for a new pair of waders?  Wait until November and get yourself a pair of these.

TACKY FLY FISHING - BIG BUG BOX
Last year at IFTD, Tacky Fly Fishing won the "Best of Show" award for fly box/storage.  Dammit if those boys from Utah didn't do it again with the Big Bug Box and for good reason. 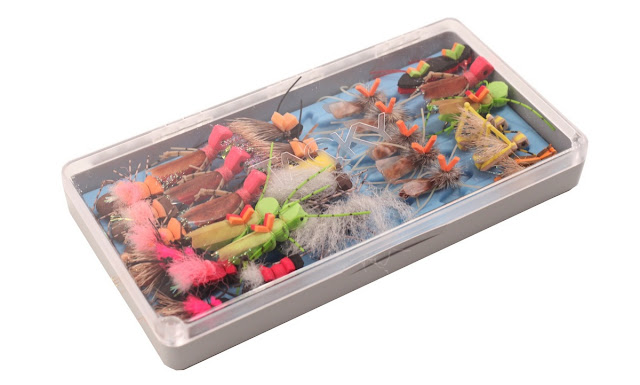 The Big Bug Box is not only thicker to allow for larger flies but the silicone mat on the floor of the fly box is cut with insertion guides to ease the placement of the flies in the box.  The Big Bug Box features everything else that makes Tacky fly boxes Tacky fly boxes with magnetic closures, clear lid, and heavy duty polycarbonate construction.

Get yourself one...or three.

UMPQUA ZERO SWEEP PACKS & BAGS
The designers at Umpqua went back to the drawing board on most of their packs and bags and the new thing for 2016 is all things ZERO SWEEP.  The basis of this idea is to create packs and bags that are devoid of things hanging off to catch and tangle fly line when on the water.

The result is a whole new family of nine packs and bags which will be available in Granite/Blue or Copper/Black and surprisingly solid price points for the long list of features such as ported nipper and accessory stations, "blind" hemostat sheaths, custom buckles , and specially-designed zipper pullers.

There is something for everyone in the new line up and the ever favorite Tailgater Organizer gets a slight facelift as well.

VEDAVOO
Scott Hunter of Vedavoo had an impressive booth at IFTD and the two mentions that I want to pass along were the original Reel Service pieces which were hand drawn and painted by artists like Eric Hornung, Jeff Kennedy, Paul Puckett, and Andrea Larko, among others.  These items will be raffled through the Vedavoo website beginning August 1st, 2015 and will benefit Project Healing Waters.  The goal for this raffle is to raise $10,000 for this worthy cause.  More details soon on this. 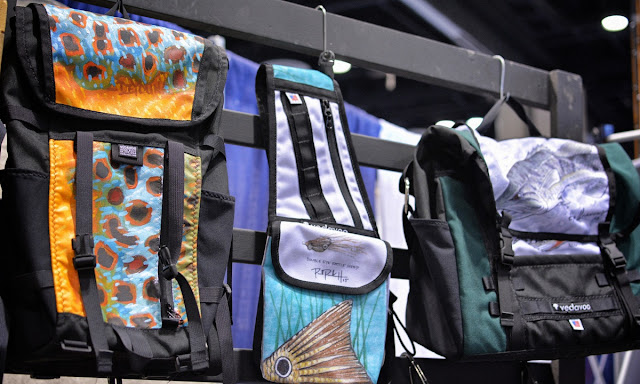 Also in the Vedavoo line up for next year will be the launch of the "Artisan Series" Limited Edition Tightline Sling Pack which will feature the "Brook Trout Flank" artwork of A.D. Maddox.  These packs are built on specialty poly fabric printed and there will only be 100 of these packs made priced at $149 each.  These will launch August 1st on the Vedavoo website. 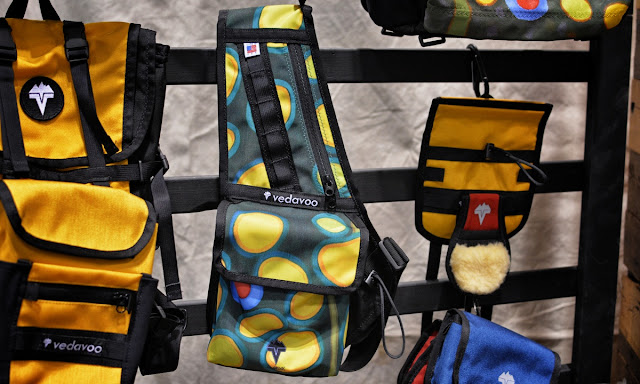 Follow along on the Vedavoo website for more information on the Project Healing Waters auction and limited edition releases.

WESTERN RISE
I've been following this company, both online and through social media, from the start and it was great to meet Will and Kelly Watters of Western Rise while at IFTD.  We had a great meeting and it was stellar to put hands on the current offerings as well as see what's in store for the coming seasons as well.  There is a tremendous amount of thought that is going into each of their apparel pieces both in design and the various specialty fabrics used. 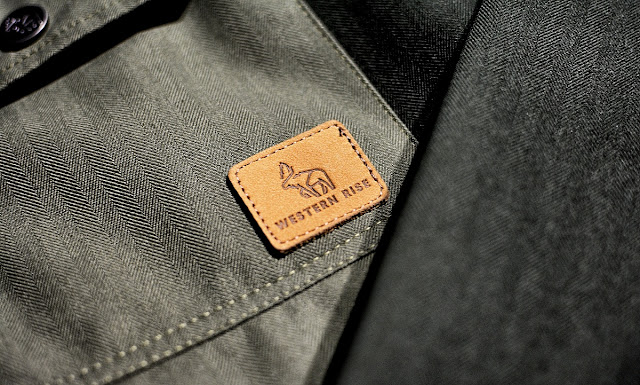 Highlights from the current season's offerings include the tough but comfortable Granite Camp Pants and Shorts and a very original take on waterproof outerwear with the Bitter Creek Anorak.   You'll hopefully see these both again in a future T.F.M. review.

Seeing what's in store for the future, this is just the start of some very cool offerings and collaborations from Western Rise.  If you aren't following them already then do so through their various social media pages and newsletter.

Well, those are the highlights (that I can talk about now) from IFTD.  There are a few more things in store to unveil in the coming months but you'll have to wait patiently on that.

Want the full listing of "Best of Show" winners from IFTD?  Check Angling Trade for the entire breakdown.

Lastly, props to AFFTA for doing a great job in putting the IFTD show together start to finish.  There are long list of logistics in pulling something like this off every summer and they made it look easy.
Posted by Cameron Mortenson at 6:00 AM

They are a great supporter of the Trout Bus too!! Super stoked you got to take a look at the goods!