When I walked onto the boat of Captain Gifford Scott of SC Flats Fishing with a couple fiberglass fly rods, the first question he asked me is "Are you willing to break your fly rod today?"

I thought about it for an uneasy moment and said "Ah, sure..." though inside my head I was really hoping that I wouldn't turn the freshly made Epic Bandit into four or five pieces before the day was over.  I was already imagining myself sending Carl McNeil of Swift Fly Fishing an awkward email that would surely begin with the words "I'm so sorry..." 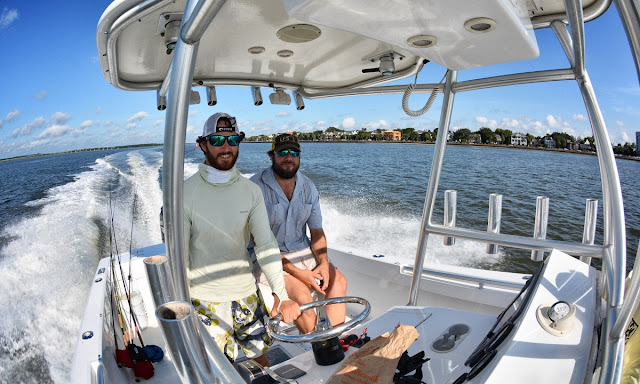 Fly fishing for sharks is something that I have never done before and Captain Gifford Scott had just gotten a new boat to extend his reach around Charleston waters and beyond.  Needless to say I was stoked to give this a try.

Our first objective once on the water was to find bait fish for the chum bag which meant finding the birds diving in open water.  Birds were found in short order and after a couple tosses of the cast net by Captain Scotty Davis, we had the bait we needed.

Now we just needed to find a trawler in a place that Captain Gifford Scott had previous experience with also finding sharks.  We spent the next couple hours trying a few different places, behind a few different trawlers, and worked our way miles away from Charleston on a really beautiful morning.

By late morning everything begin to fall into place with the right location, trawler boats working, birds in the air, dolphins following along, and most importantly sharks were swimming quickly behind the boat to sniff out our chum line and then bolt.  I was really surprised how quickly the sharks, in ones and twos and threes, would swim into the chum line and realize there was nothing was nothing to eat and leave.

We had just moved into position just off the starboard side of a trawler moving away from our drift and I had cast a bright orange fly of chicken feathers thirty feet behind the boat and let the intermediate line take it down beneath the surface several feet.  Not a minute later I saw a shark come up from below the fly and devour it as it turned left to swim away.

The circle hook found hold and the next hour was a grudge match of fly line and backing taking off into the ocean and going back on the fly reel and then starting it all over again.   The Bandit was doubled over and I wondered aloud if it was going to make it without shattering into pieces.

Thirty or so minutes into the battle I was able to get all the backing and fly line back on the fly reel and Captain Scotty Davis hung over the side of the boat to tap the leader.  This was essentially a caught shark but Captain Gifford Scott wanted it in the boat and this shark was far from being done.   The next thirty minutes was back and forth of running out fly line and getting it back on the reel and then running it out again.  The Bandit was so bent and I was trying to work side pressure against the direction that the Blacktip shark wanted to go.  By the end of it my biceps, and any muscles nearby, ached as this was essentially like doing a curl with a barbell for an hour.

Here are a handful of images from the morning on the water.  Click on an image to view in full frame.  The fisheye lens got a workout on this trip and maybe made the Blacktip shark look a tad bigger than it was but it's still the largest fish I've ever caught on the fly. 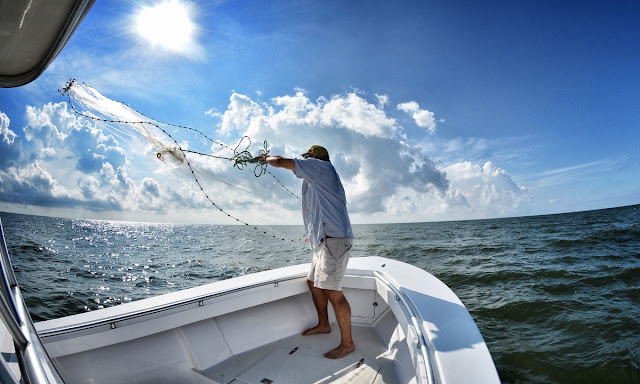 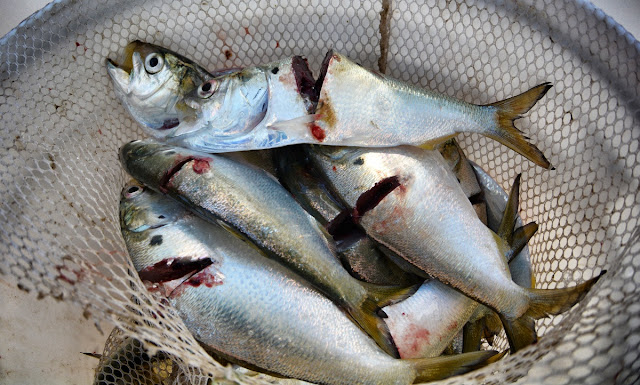 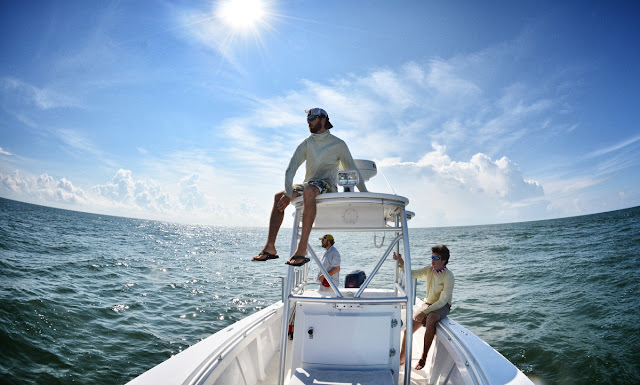 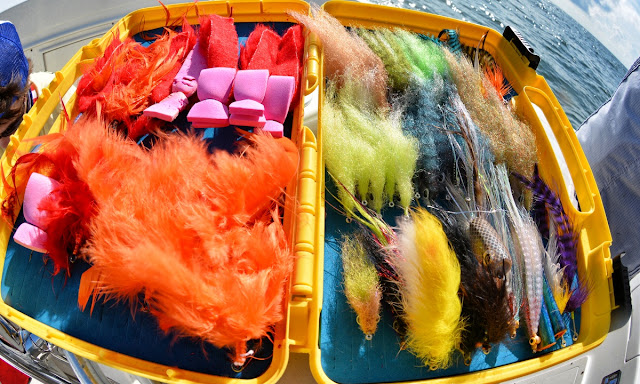 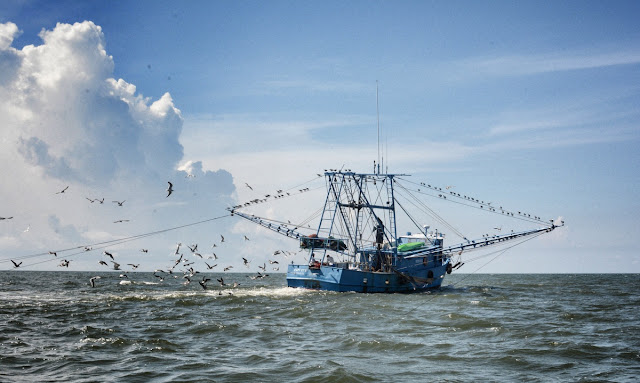 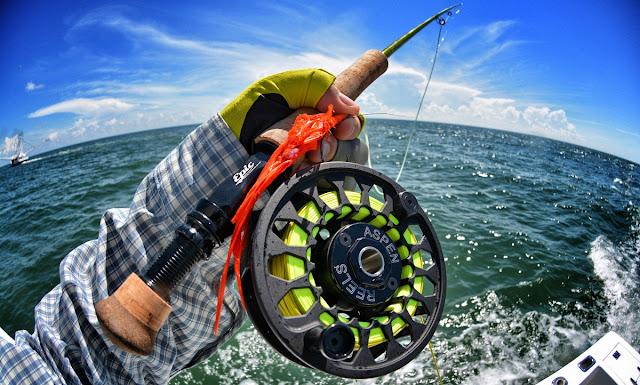 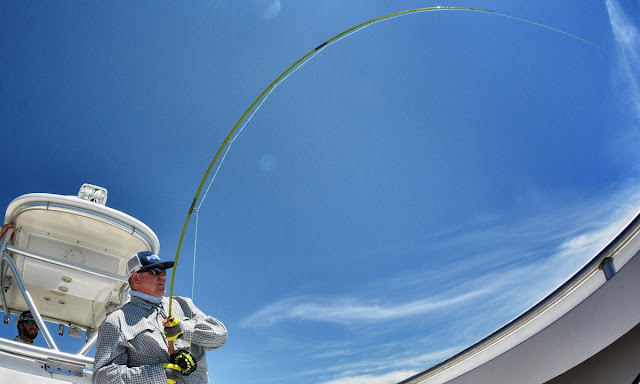 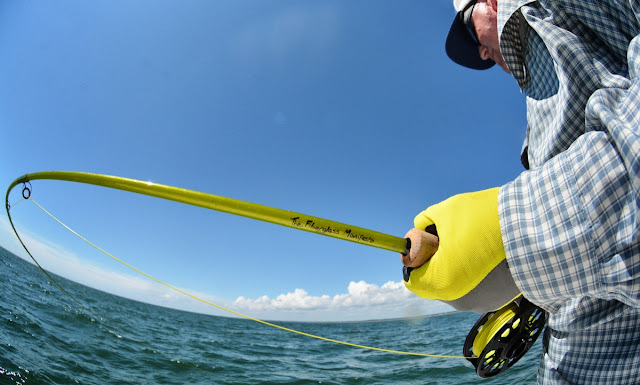 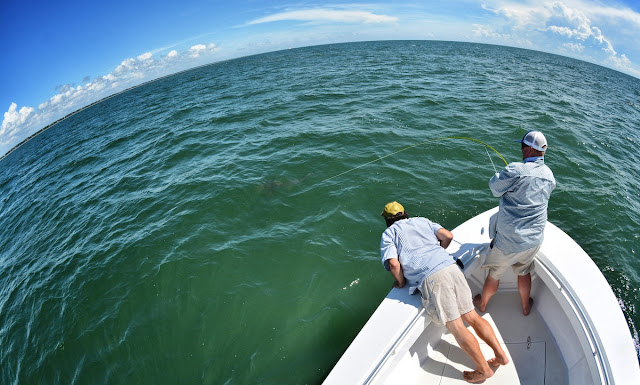 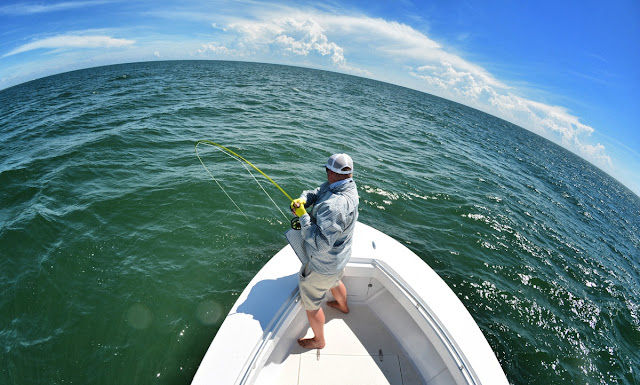 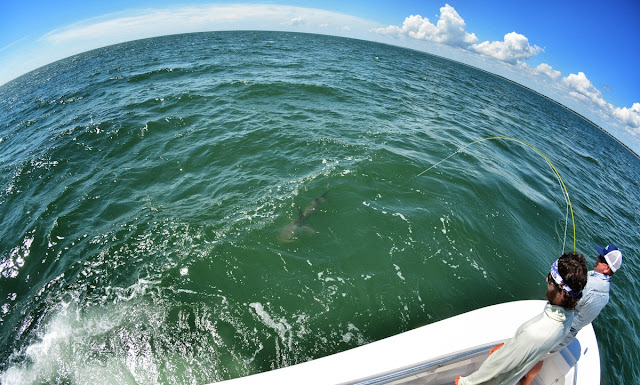 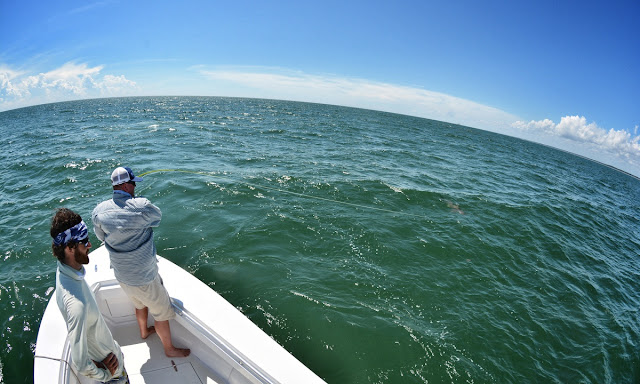 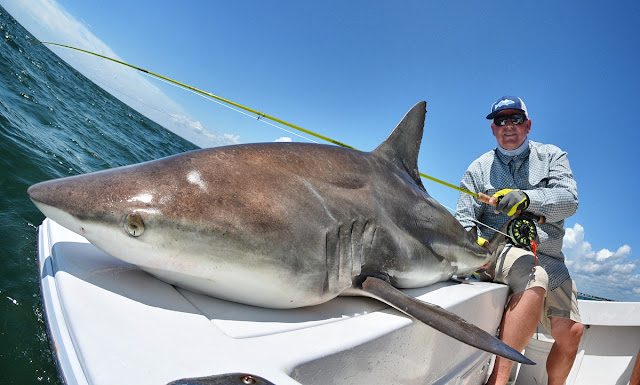 This last photograph I don't even remember as I was so blown away by this beast that we had brought in the boat but it perfectly conveys what a team effort it took to make this catch happen with Captain Gifford Scott, Captain Scotty Davis, and young Captain Ernest Brighton all working together throughout this morning.  Thank you fellas, I really appreciate it and am still smiling about this Blacktip shark that decided to eat a fly. 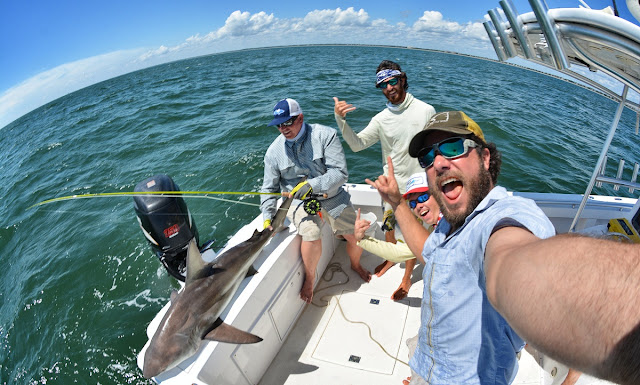 On an equipment note, since I know several will ask, there were three parts that made this phenomenal catch possible starting with the Swift Fly Fishing Epic Bandit, the Aspen Reels Large Arbor 450, and then Scientific Anglers Mastery Textured Titan Intermediate fly line to complete the outfit.

I quickly learned moments after the shark took off that the Epic Bandit ten weight really isn't fly rod enough for a 70 plus pound shark but in the end it worked.  Though I am not sure I'd try and do it again.  This is twelve to fourteen or better fly rod territory.  The Bandit is an awesome fly rod and it's really surprised me what it is capable of as I've used it over and over on nearly every trip that I've taken this year from carp to sharks.  This experience though did make me think that it's definitely time to add an Epic Boca Grande to the mix.  Carl...are you listening?

When I first put hands on a few Aspen Reels at IFTD this summer and then included a mention in the Bakers Dozen of Cool post, the first questions that readers came back with were do these have a stout drag system and how will they hold up?  I decided to buy one to find out and figured I might as well go with the biggest fly reel in their line up to give it a test.  Simply put, this shark was no problem on the Aspen 450 Large Arbor and I was most impressed with how effortless the start up inertia was on this fly reel.  I had the drag adjustment dial screwed down to  it was a big help in putting this shark in the boat.  Every time the shark would surge and take off the drag would kick in and slowly let line out.  This fly reel with the Bandit worked together to put the brakes on this shark.

Lastly, I've been playing around with a quite a few different fly lines on the Bandit and one good fit is the Scientific Anglers Mastery Textured Titan Intermediate for tossing big flies with ease.   This is going to be a handy fly line for ocean work since it loads a fly rod easily, works in temperate waters, and the textured running line working with the grained head makes this fly line shoot like crazy out the tip top guide of the Bandit.

So, want to do something totally different on the water in Charleston?  Go chase a few sharks with Captain Gifford Scott of SC Flats Fishing.  You won't regret the experience though expect to feel it the next day and have a few battle bruises that will take a couple weeks to go away from a fighting butt jammed into your gut.
Posted by Cameron Mortenson at 6:00 AM