Places With No Names - Rolling The Dice

Sunday morning I was up early since I needed to pack up and move out of the hotel room in Sheridan and then meet up with Guide Clark Smyth of Rock Creek Anglers for a day on the water with friend and fly tier, Al Ritt.  We met at the Fly Shop of the Bighorns, picked through the fly bins for a few tricos patterns of course more hoppers and we were on the road just after 7 a.m. after a quick gas station stop for coffee and breakfast on the go.  We drove north to jump the state line into Montana and we were on our way for a twenty mile river float.

When we arrived at the boat landing it was kind of an early morning zoo with drift boats already on the water, guides meeting up with clients in the parking lot, and more drift boats behind pickup trucks rolling in as well.  Clark off loaded the Adipose while Al and I readied our gear and fly rods.  I had never been on this river and there were trout rising here and there even through the traffic jam of the launch. 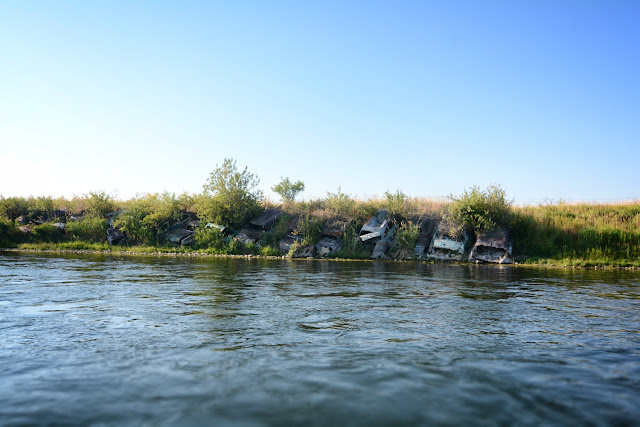 Minutes later we pushed off and though we could see birds already swirling around overhead on tricos, Clark's plan was to roll the dice and push past all the boat traffic to get out in front of other boats before the tricos started falling on the water.  This gave Al and I time to check leaders, tie on tippet, and then tie on flies to be ready when it was time to start casting.

As we pushed through the first several miles of river, we started seeing a good rise here, and there, and a few more over there.  Those rises turned into pods of trout in the slack water rising to tricos.  Clark slowed down his push to give Al and I a chance at casting at a few trout and it wasn't long before we both had caught a couple to get the stink off the boat. 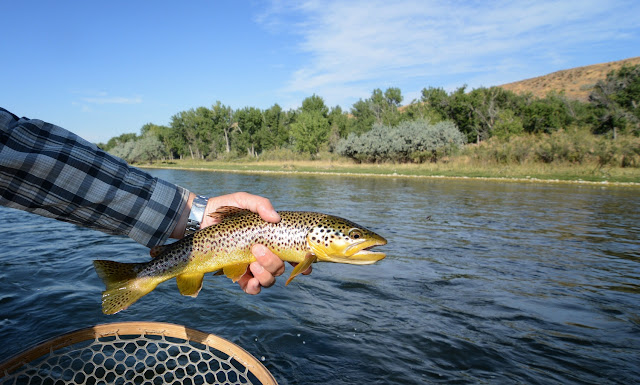 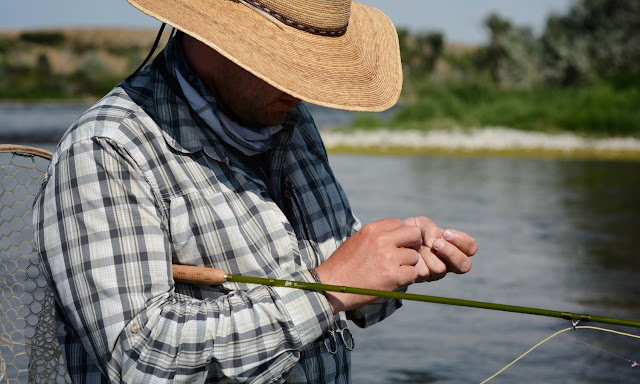 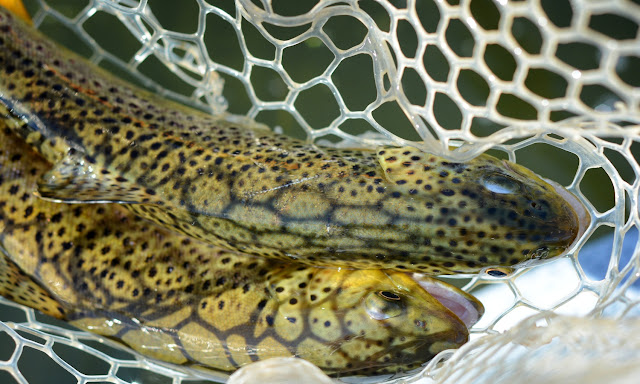 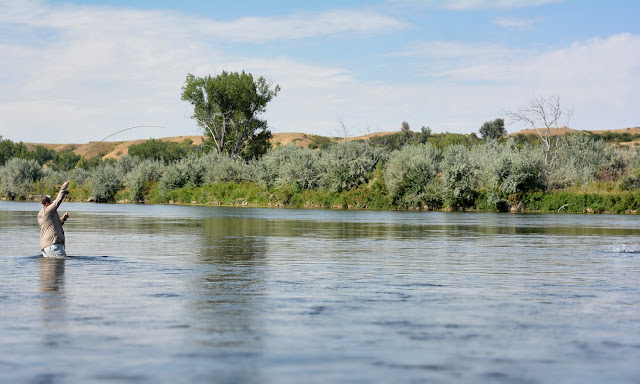 We continued our push ahead for awhile with the occasional stop to cast to a pod of trout that we just couldn't pass up.  We'd get a rise or two and then move on.  Clark wanted to make sure that we were well ahead of the others and as we were approaching a large island in the middle of the river we noticed a string of pods lined up on the right side of the river with actively feeding trout on tricos and then in the middle of the river ahead of a large island, another large group of trout were feeding as well.  This looked like a great place to stop and Clark dropped anchor on a shallow gravel bar.  Al and I hopped out of the drift boat and the cold water felt good wet wading.

Al took off to the edge of the river while I opted to walk upstream to cast to the trout that were feeding by the dozens in the middle of the river just ahead of the island.  Standing in the river you could hear the noise of the riseforms as the trout slurped down every trico they could see.

The rolling of the dice totally paid off since we had the river to ourselves for almost two hours while we all worked rising trout on small trico patterns.  My preferred setup was a size 18 trico spinner (with pink wings) with a size 20 trico CDC wing emerger off the back.  More times than not the emerger was the winner but rises on the dry fly were fun to see as well. 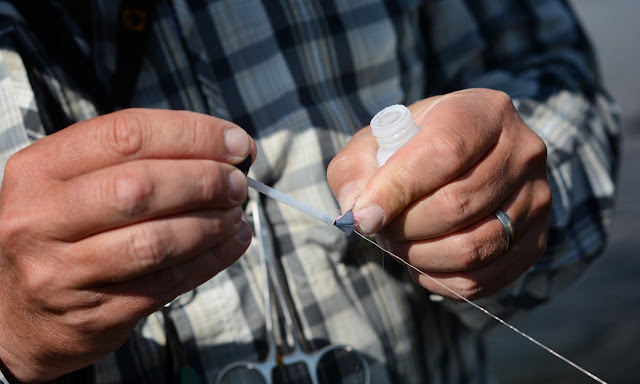 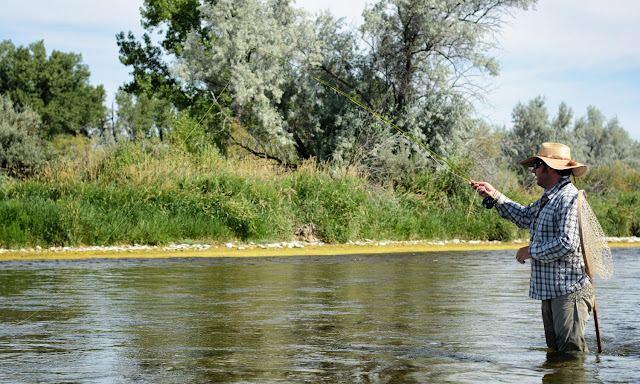 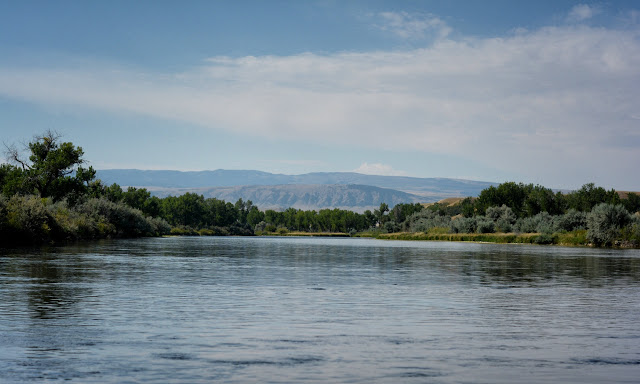 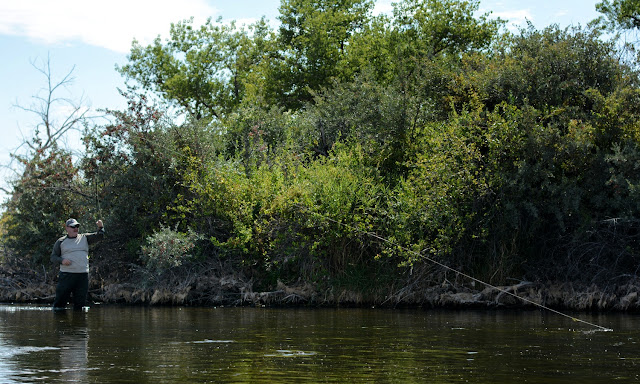 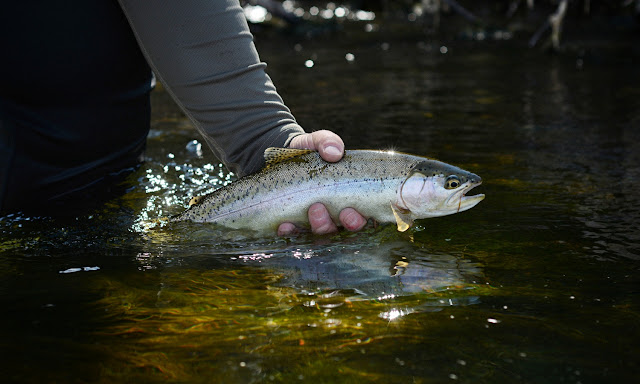 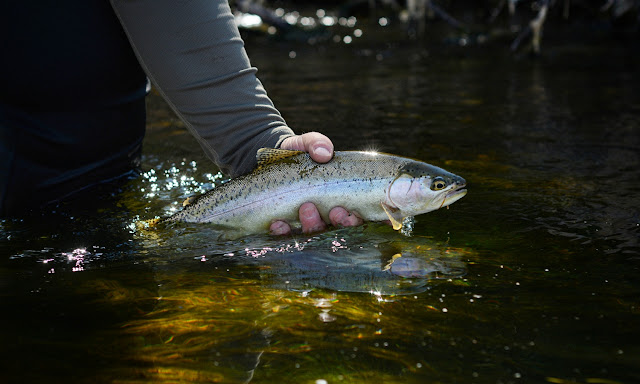 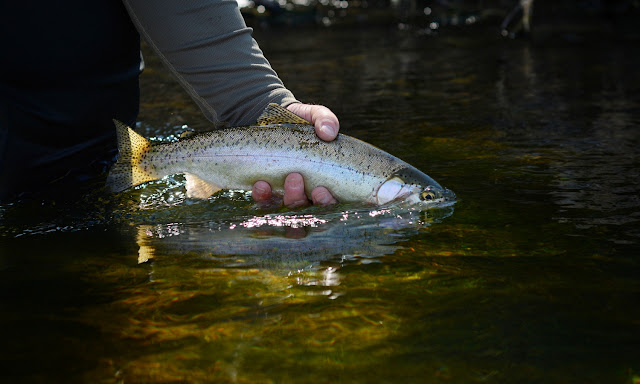 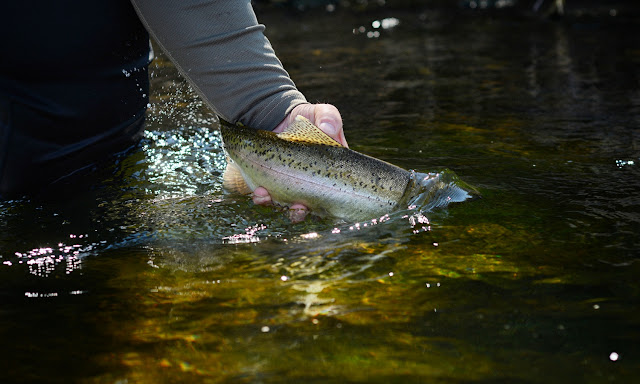 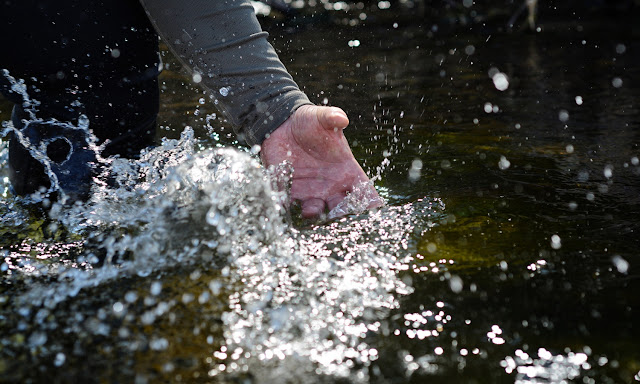 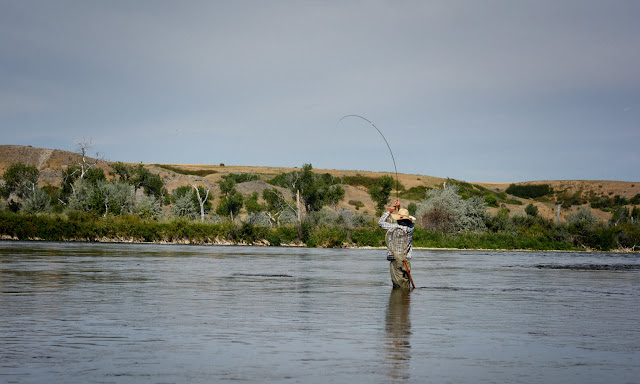 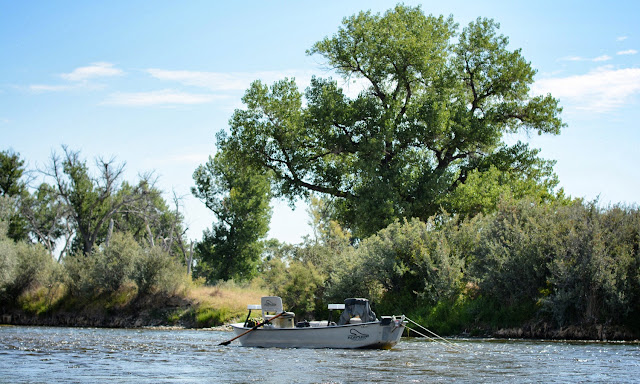 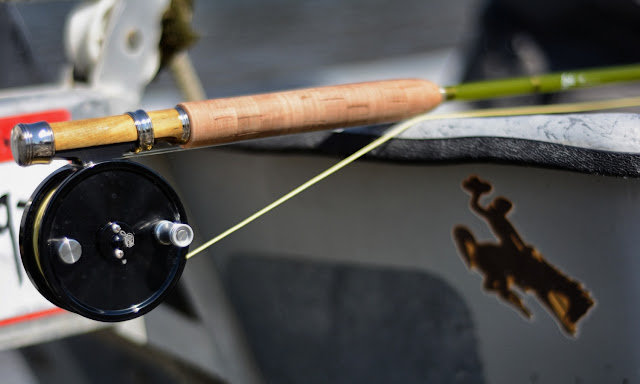 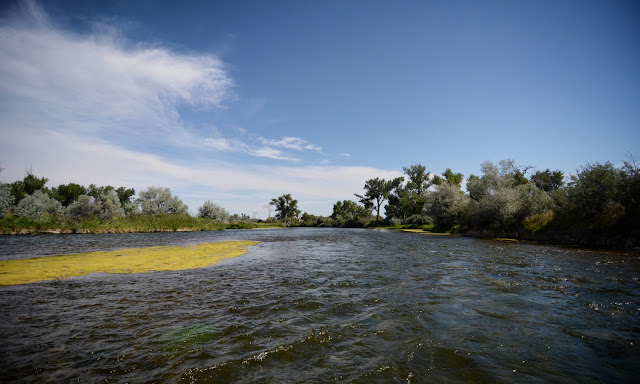 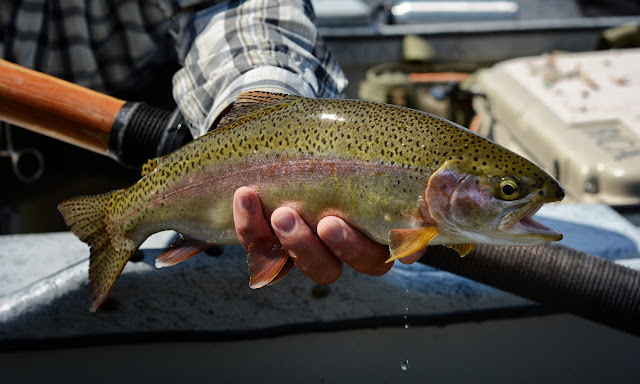 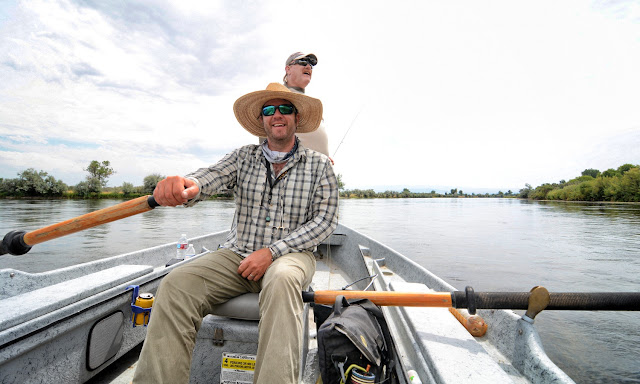 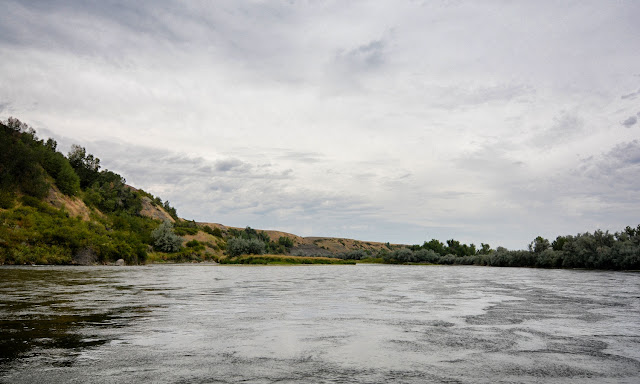 Since we had quite a few miles to go, Clark suggested that we kept moving forward.  It was still thirty minutes or so before we saw our first boat coming up behind us and it was so great to have all that water to ourselves for so long.

The tricos finally gave up the ghost by late morning so Al and I changed tactics with hoppers on top with or without a small nymph dropped off the back.  We caught a few trout but things slowed down quite a bit from the success of the morning.  Thinking back, especially as it clouded up and turned stormy in the afternoon, I likely should have tossed a streamer but it's hard to break the hopper habit when there's a chance of a big snout coming up to eat it.

Late afternoon and conditions quickly changed from cloudy to looming thunderstorms in the area.  Clark pushed hard on the oars as a storm built up behind us and a heavy rain pushed down as we pulled up to the take out which made for a quick drift boat load onto the trailer, unloading of gear into the trunk, and in minu

Al and I have talked about fishing together for quite a few years now so this was just a perfect day (even with the storm at the end) to share on the water.  Clark Smyth of Rock Creek Anglers put a lot of river miles behind us and along the way showed us around, along with pointing out literally hundreds of trout, on a gorgeous river.  This was my last day on this trip on the water and a great way to wrap up an incredible experience.

GEAR NOTES - Adipose drift boats are crazy spacious so it was no problem to bring a couple fly rods along for the day.  I started the morning with the Swift Fly Fishing Epic 480 paired with an Abel Reels TR2 and the Swift Fly Fishing Glassline four weight double taper fly line.  This is a dry fly dream outfit and certainly one that I reach for over and over.  Clark hadn't fished any of the Epic offerings and was impressed as well.

When I switched over to hoppers, I opted for the Livingston Rod Co. Western Glass 8'6" five weight with an Orvis CFO III lined with Scientific Anglers SharkWave GPX.  The focus of rod maker Dusty Smith with his designs of the Western Glass line up is that they are capable and progressive in taper and this one was made for hoppers inside and out.  I had a great time casting this fly rod throughout the afternoon and I've found my new favorite hopper rod for sure.
Posted by Cameron Mortenson at 6:00 AM

Thanks for the great report. Al's an all around gentleman and great guy.

Great picture essay and report. I enjoyed reading about the trip!

David... Thanks. It's a lot of fun for me to relive these days when creating a blog post.