BLUE HORIZON BELIZE - A Few Notes On Getting There

For as much traveling as I have been able to do over the last few years related to fly fishing and family trips, I haven't flown anywhere international.  When Scott Thompson of Blue Horizon Belize contacted me about coming down to see what all they had going on there, the first thought I had was wondering if my passport was still good.  Fortunately it was current and Belize does not require a visa for entry so not much to do at that end.

The biggest obstacles on squaring away myself for a trip like this is making sure the calendar is open with everything going on with my wife and children and then making sure that a vacation request gets approved at work.  I'm gone a lot, so checking both of those boxes off isn't always easy.  Somehow these dates were open, the boss approved the vacation request and the trip was a go. 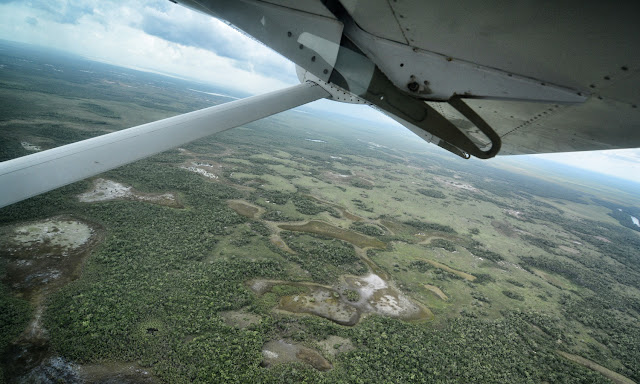 As everything was starting to firm up, there were some reservations on my side that getting there might be a huge hassle or unbelievably expensive.  What I found though was that the cost of the ticket to Belize City from Columbia, South Carolina was less expensive than the last several airline fares to Montana or Wyoming.  What was also very helpful is that once the Delta flight to Belize City was set, Blue Horizon Belize arranged my hopper flight with Maya Island Air to Dangriga and all I had to do was go online and pay for the fare.

Departure was on a Sunday morning with a 7:00 a.m. flight from Columbia to Atlanta with a layover (Delta Sky Club for the win) and then the flight to Belize City.  Once I had arrived it took a few minutes to pass through customs and was put on an earlier flight to Dangriga.  The flight to Dangriga gave a good look at the lay of the land and really sparked off what would be an excellent trip.

All in all, less than four hours in the air and I was in a totally different place in the world. 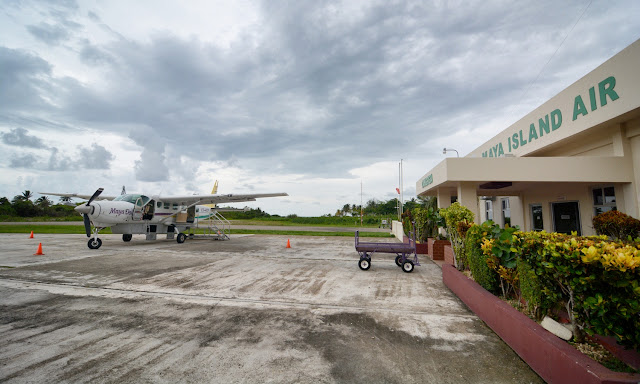 Once in Dangriga, the shuttle driver picked me up and drove me around town for a bit explaining where he had grown up, giving some local history, and stopping into the market to make sure that I had a cold Belikin for a proper welcome.

Minutes later I met Scott at the dock and jumped into the panga to shake hands and get to know each other while staff members made a quick trip to fill up coolers with ice to take back to the islands.  In our conversation I found that Scott has lived in Belize for the past eight months and after decades of guide work in Colorado, he jumped on an opportunity to be apart of Blue Horizon Belize.  From the short time that I had been in town, it seemed like the right decision.

With coolers filled with ice and then loaded into the panga, we made the short boat ride across stoppin in at Thatch Caye for a few minutes and then on to IZE Resort where we would be staying. 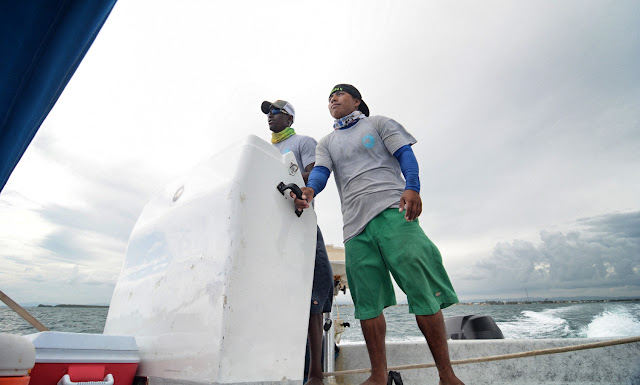 After a deep water crossing, we eased into the small harbor area at Thatch Caye.  Scott pointed out recent tropical storm damage and the repairs that they had already made from a recent storm.  All I saw was a nearly flawless island escape.  We hopped out of the boat and took a quick walk around the island to check out the lodge and accommodations.  This is a small but impressive island with a great layout featuring a mix of bungalows and villas.  Another neat feature is the Rod Shop where guide and client gear can be cleaned and stowed at the conclusion of a trip. 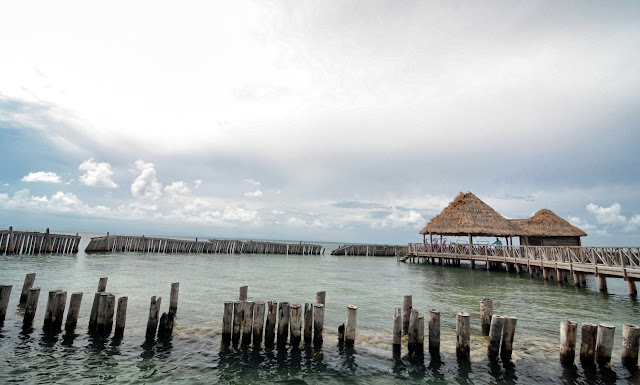 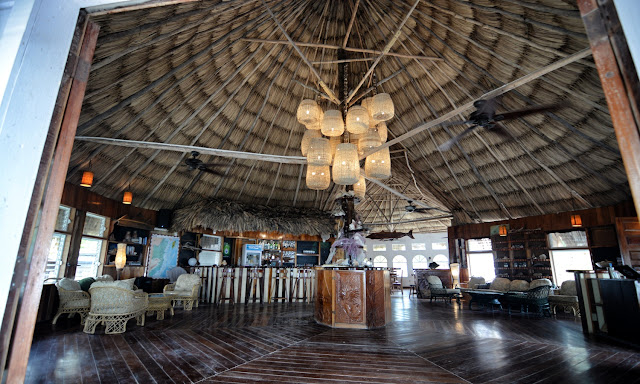 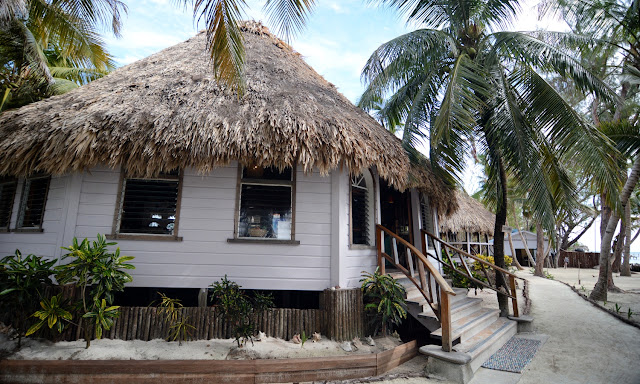 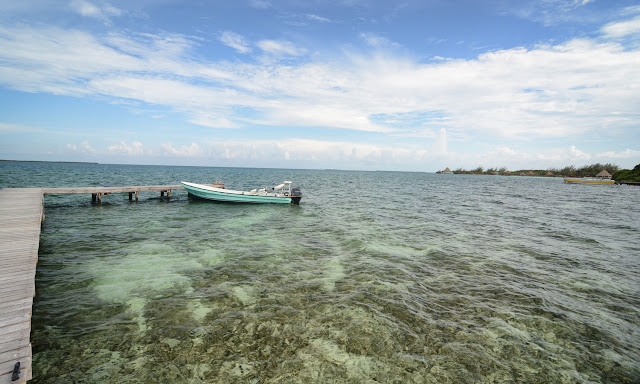 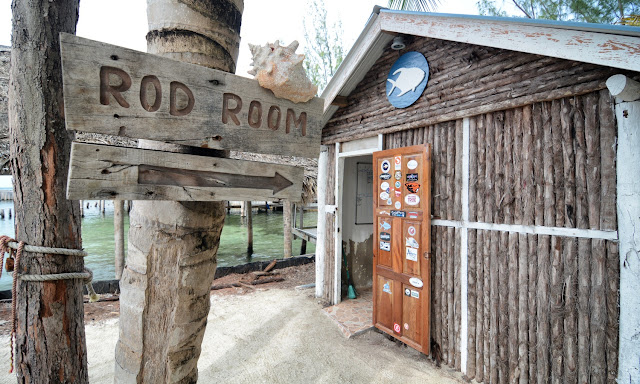 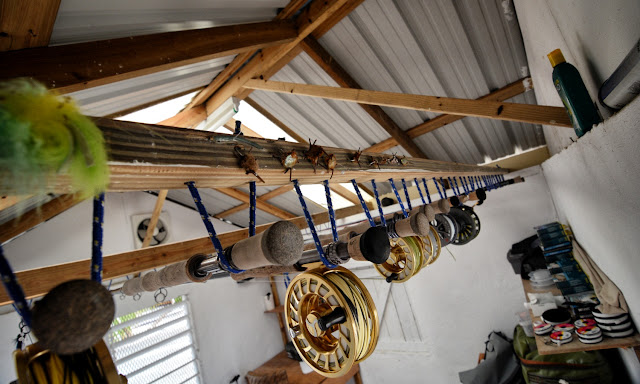 With the tour at Thatch Caye complete, we jumped back into the panga and made the five minute ride over to IZE Resort.  Scott moves from resort to resort (there are a total of six that the company that he works with owns) and he was staying at IZE Resort with me for the week.

Upon arrival, the resort manager gave a quick tour of the island and my luggage made it to the cabin.  Since Scott was wrapping up another group trip, he made the trip back to Thatch Caye leaving me with the evening to myself on a small island surrounded by shallow flats, bonefish, and maybe a permit if I looked hard enough. 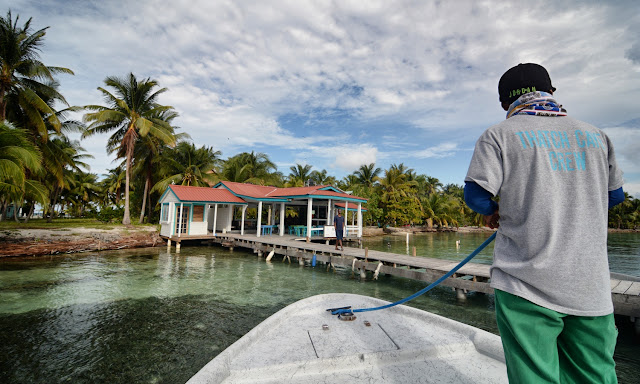 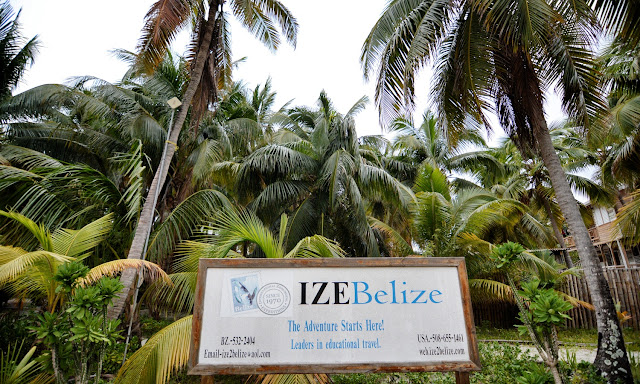 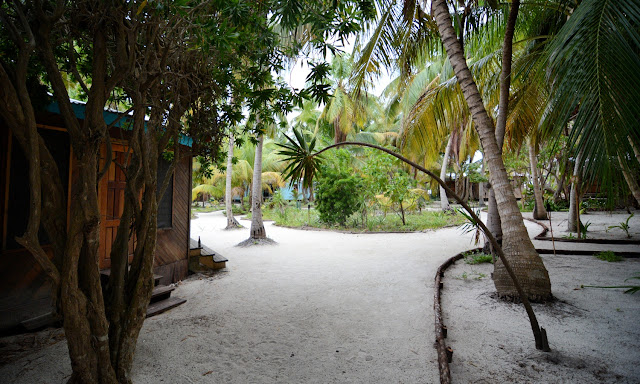 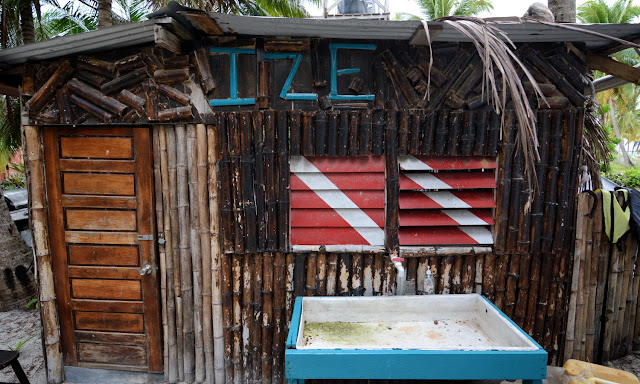 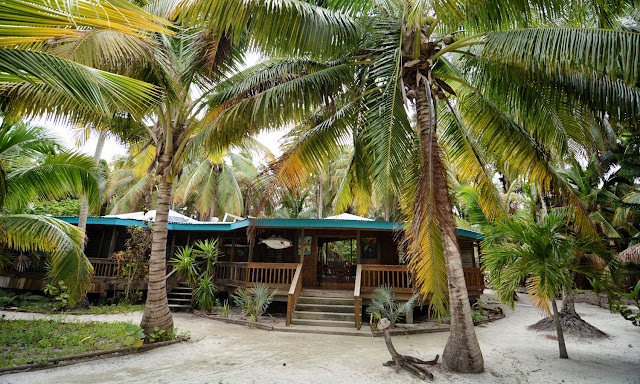 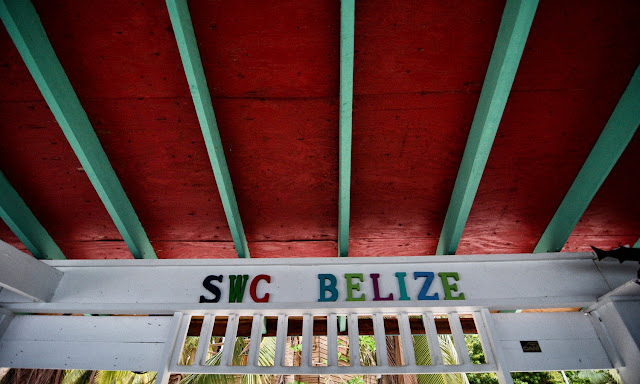 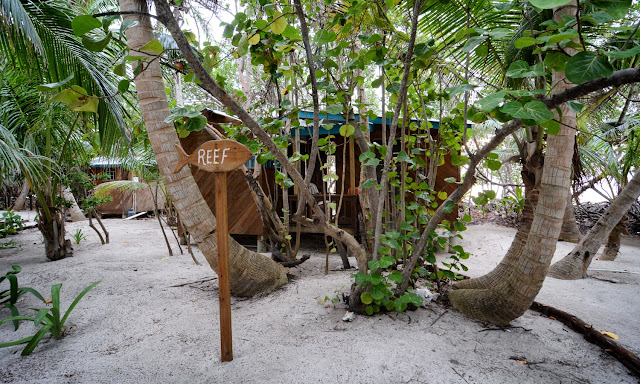 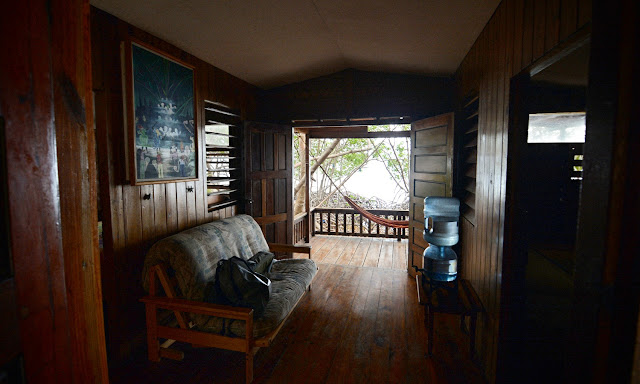 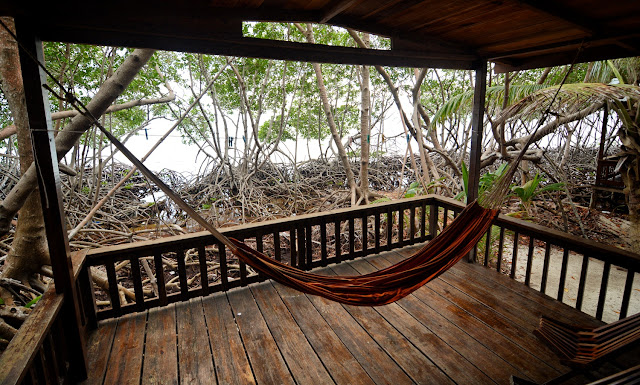 Since I had asked for a late dinner I had a couple of hours to kill.  After a walk around the island to check everything out I decided to go try to find my first bonefish on the fly.  I slid on my flats boots and hurriedly put the Livingston Rod Co. eight weight (which is a REALLY awesome light line eight weight) together with a Solitude 4 fly reel and Scientific Anglers Mastery Bonefish fly line.  I grabbed a few flies, a tippet spool, and found a path beside the cabin to walk into the flat on the backside of the island.

I have never gone after bonefish before and I carefully walked through the shallow warm water and turtle grass keeping an eye open for a tail, nervous water, or a pod of fishing moving over the flat.  A dark shape appeared near the shore and I laid out a cast in front of it only to have a small nurse shark rush the fly to devour it.  I set the hook and the shark moved quickly off the flat taking fly line and then into the backing.  The battle didn't last long and I reeled in the line to find the fly cut cleanly off.

I tied on another fly and began casting at what looked to me to be likely places in the shallows that a bonefish would cruise.  In the evening light actually seeing a bonefish under water would be near impossible.  It wasn't too long however until I felt a quick pull and I was onto my first bonefish.  Several runs later the bonefish slid into my hand.  What a start to the trip.  I reeled in, waded out, and walked back to the cabin to get ready for dinner with a smile on my face. 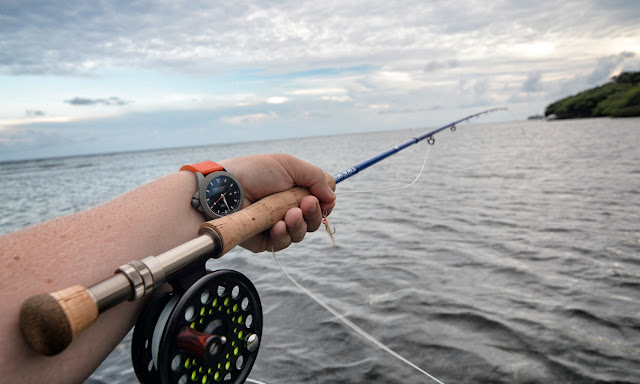 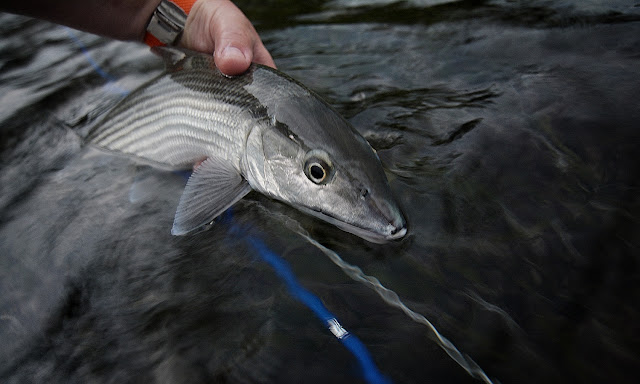 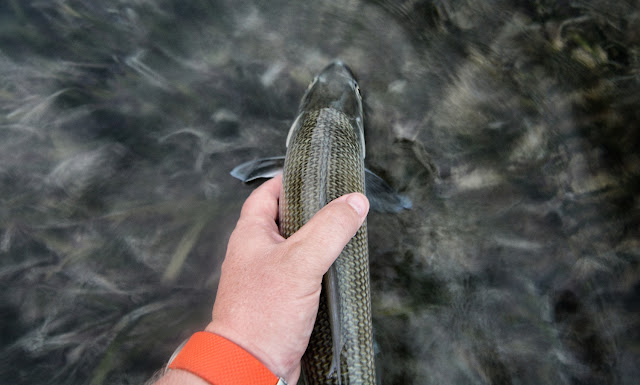 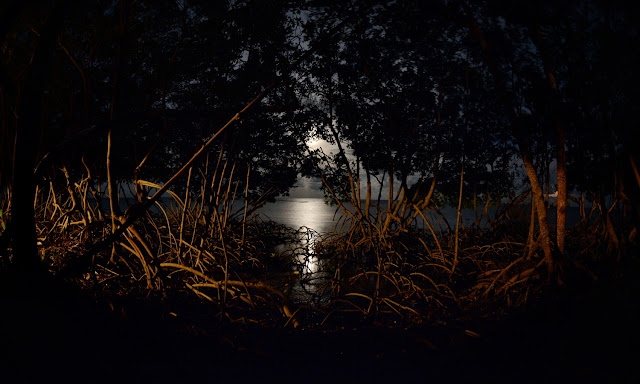 It was a warm night in the 80's and just as much humidity with a full moon that lit up the ocean through the mangroves.  I retired to the cabin after dinner to prep the gear for the next morning.  Instead of falling asleep in bed, I settled into the hammock on the back porch to the sounds of the waves crashing on the reef while enjoying the ocean winds.  In the middle of the night, though still a warm night, I moved to the bed where it was comfortable enough for the rest of the night.

Want to know more about the places mentioned?  Check out the Blue Horizon Belize website along with the Thatch Caye and IZE Resort websites too.
Posted by Cameron Mortenson at 6:00 AM

Congrats on your first bonefish. A milestone has been passed.

Bjorn... Good to hit this milestone. I'm ready to knock out the one for permit now too.