Today a long list of bloggers and online media writers are all focusing on bringing more awareness to public lands and keeping them accessible now and in the future.  I likely don't have the same experience and knowledge on all of these issues as I should but still wanted to contribute in my own way which brings me to this post.

I started fly fishing in my late teens.  I worked at a summer camp in northern Michigan and had started fishing a lot on the lake with an old spinning rod I borrowed from a friend.  There were bluegills, pike, largemouth, and smallmouth in the lake and spending summers living outside of Grayling, fly fishing was all around me.  I didn't have much money to invest in a fly rod but t wasn't too long until I teaching myself how to fly cast with an Eagle Claw Featherlight matched with a tuna can Martin and budget level line that came on the outfit. 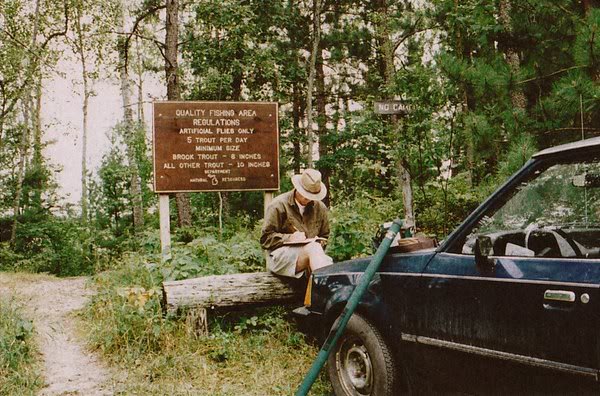 During the summer I spent a lot of time on the Au Sable River across the street from camp and on evenings when I could sneak away with more time on my hands, I'd drive over to the Manistee River or take a left and head to the South Branch of the Au Sable River.  These rivers really got into my blood and even though it was years before I caught a trout that I could really brag about.  Still, I was putting my time in, learning the hatches, reading whatever I could, and hanging out in the local fly shops soaking in whatever knowledge was offered.

I went to school downstate and on late night study breaks I would pour over the Delorme Atlas & Gazetteer highlighting tiny blue lines, campgrounds, and make plans for weekend trips.  To say I was a poor college student was an understatement.  I drove a Ford Escort dubbed "Winslow" that had been purchased from a family friend for $100, skimped and saved for flies, gas money, and whatever groceries I would need for a few days in the woods.

On weekends that I could get away, I would pack up all my gear in the car, pray that Winslow would make it north, and took off for places I had never been before.  Highway asphalt and secondary roads led to white sand back roads which led to pull offs and trails to sweet tea colored rivers and creeks.  Brook trout, rainbows, and brown trout smashed dry flies and I would be happy all over again.

Northern Michigan is blessed with all sorts of obscure campgrounds with sites tucked in the woods with a wooden box at the entrance costing just a few dollars a night.  This was perfect for a college kid on a budget and if I didn't go crazy at the fly shop, I could plan a weekend on the water for a couple $20 bills.  No joke.

As teen years turned to twenties, thirties and now forties (I'm showing my age here, eh?), it would be easy to think back that it really sucked being a poor kid learning to fly fish but instead I cherish those years.  I had hundreds of miles of public water surrounded by thousands of acres of public land to explore and explore I did.  As long as Winslow had a full tank of gas and I had a few days free from classes, I was gone.

Those places didn't cost me a penny but certainly etched so many stories and experiences into my brain of early years fly fishing.  It's no wonder that I still yearn for the northern woods of Michigan and these places are now an important part of my children lives as well with camping, kayaking, and fly fishing on those same waters.

If those waters would have been private or pay to play, I can't imagine that I'd be the angler that I am today.  My access would have all gone away.

I'm "Public Lands Proud" and want to do whatever it takes to keep these places that way for generations to come.
Posted by Cameron Mortenson at 6:00 AM

Thanks for posting your story. Our US public lands are a treasure for all of us to use for a nominal fee, or even free, and sadly not enough people realize how good we have it compared to other countries. If we aren't careful, fly fishing (and hunting) will only be in the realm of those who can pony up a hefty fee.

As a young man in his twenties living in South East Michigan who has only been chasing fish with flies for a couple years, this hits pretty close to home.

Kevin... No kidding. Public lands are to all our benefit.

Unknown... Glad that I could hit to spot. You have a lot water all around you. EXPLORE.