BLUE HORIZON BELIZE - On The Flats With The Permit Master

As planning and preparations were coming together for the trip to Blue Horizon Belize, Scott Thompson and I had talked about spending some time with Lincoln Westby, famed guide and the Godfather of permit angling in Belize, but I never expected to have the opportunity to spend multiple full days on the water with him.  Nothing like turning the "Catch a Permit" stress dial (which was already near pegged) turned up a few more notches to the right with having the "Permit Master" looking over my shoulder and calling out shots for me from the back. 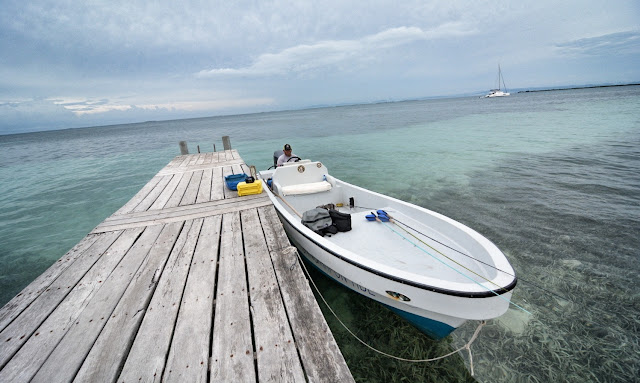 A few things to know about Lincoln Westby is that he's 73 years old and has been guiding for over 40 years.  He more or less pioneered fly fishing for permit in Belize, owned his own island lodge and has also worked for many of the lodge operations in the area.  Lincoln is an institution and a treasure and it was an honor to stand on the bow for a few days while he gave quiet instructions as we'd approach a permit tailing in the shallow flats, told stories from yesteryear, and spoke about the plans for a new Blue Horizon Belize which will likely begin construction in the coming months.

Fly fishing for permit is a passion for Lincoln and when I met him on my arrival to IZE Resort, he had already guided six days in a row and that was part of the surprise that he would opt to spend three more days with me.  It really made me want to make sure that I was doing my best to listen, make the right cast, and soak in whatever knowledge that Lincoln would pass along.  In decades of guiding, learning, and figuring out permit, Lincoln follows the moon phase, has snorkeled on the edge of flats to watch permit feed, and remembers the thousands of permit that he and clients have caught one by one in his mind.

What Lincoln said on that first morning rang true for the entire trip that the moon phase and west wind were working against us.  Permit like a tide that is sparked by the moon which pulls water across the flat.  Instead we had days of minimal water slowly moving with the wind working against us.  This meant that instead of seeing permit tail after permit tail that we really had to search them out.  They would be around but just not in the numbers that they could be in a perfect conditions scenario.

Permit tails or not, the area was unbelievable in beauty with deep blues of the deep water surrounding pancake flats in a wash of green and mangrove islands dotting here and there.  This really set the bar high for any future saltwater fly fishing trips. 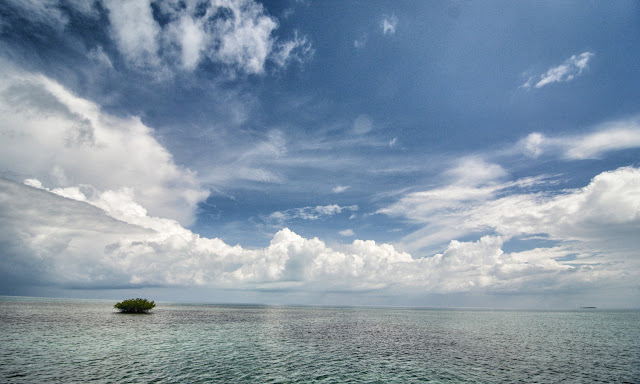 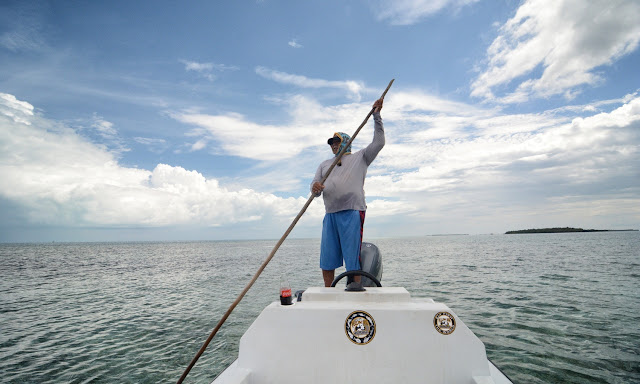 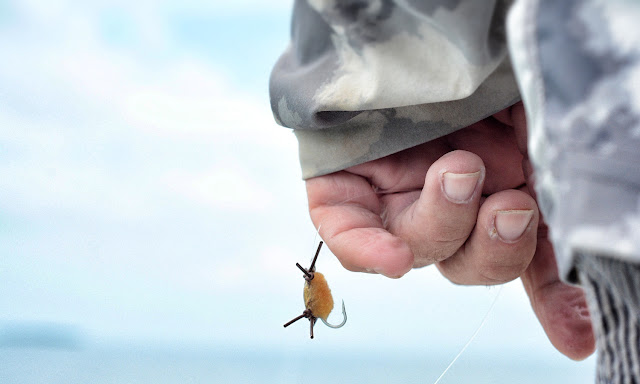 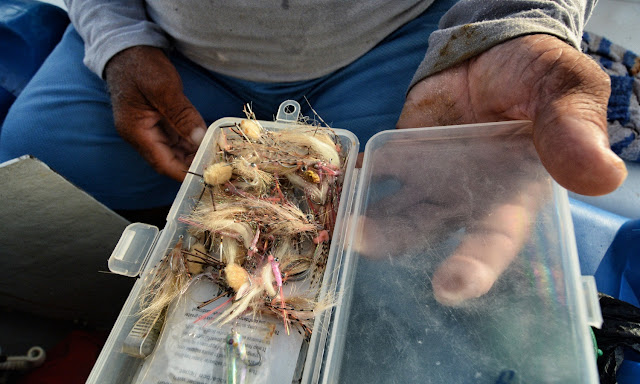 When we met Lincoln easing up to the dock in his panga at IZE Resort on our second morning out, he had brought along his nephew, Ransom Nunez, who is also an established permit guide.  Lincoln had been sick overnight and felt like it might be best to bring along a second guide to work with him.  I would end up fishing with Ransom for three days as well.

Now we had two sets of sharp guide eyes in the back while Scott and I would often times mistakenly call out fan coral for tails and getting everyone excited over nothing.  If I didn't catch a permit (which I didn't) it certainly wasn't from not having the best of the best on the back of the panga.

As a rule, fly fishing guides in this area don't use elevated poling platforms and opt for a straight length of wood over a lightweight carbon push pole.  It's really surprising how easily Lincoln (and Ransom) moved the panga across the flat as these boats can easily weigh two tons.  They both made stopping or quickly changing our position look easy.  The panga is a perfect vessel for these waters as the focus is to cross deep water to access pancake flat after pancake flat while only needing a handful of inches of draft to move across the skinny water. 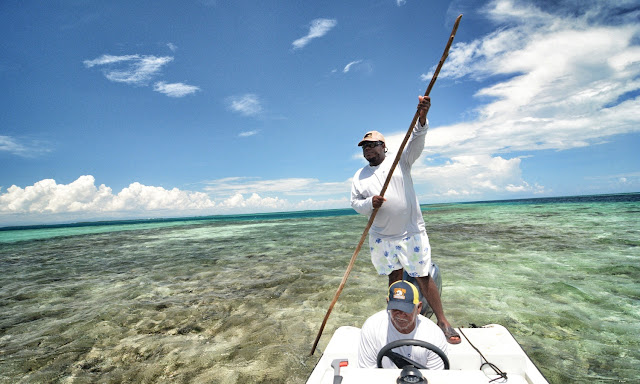 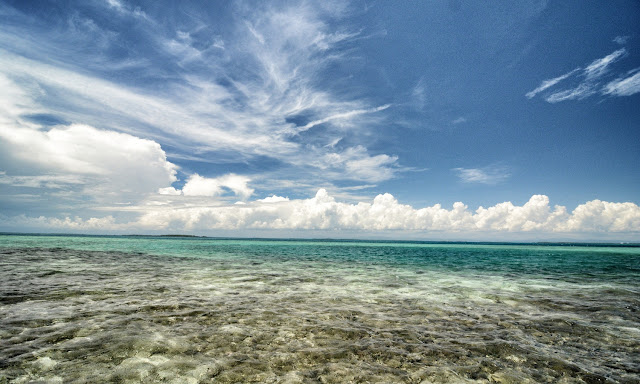 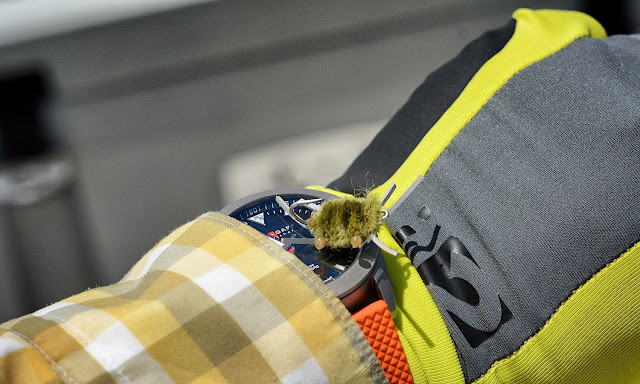 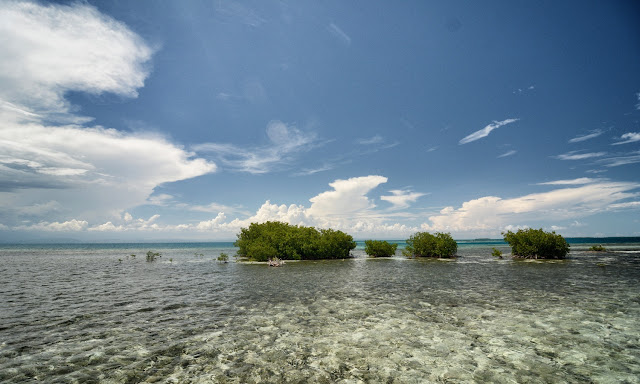 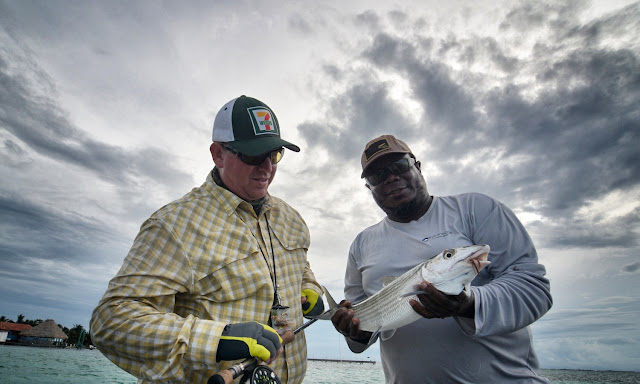 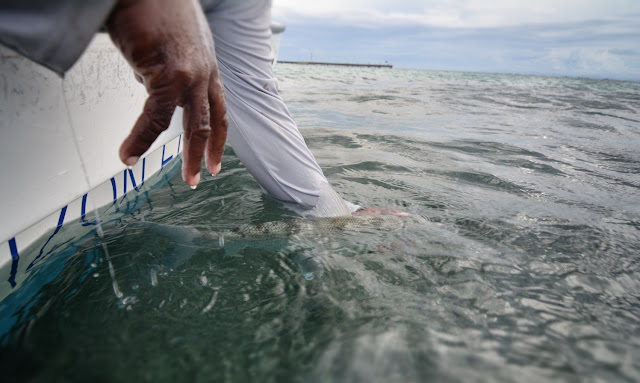 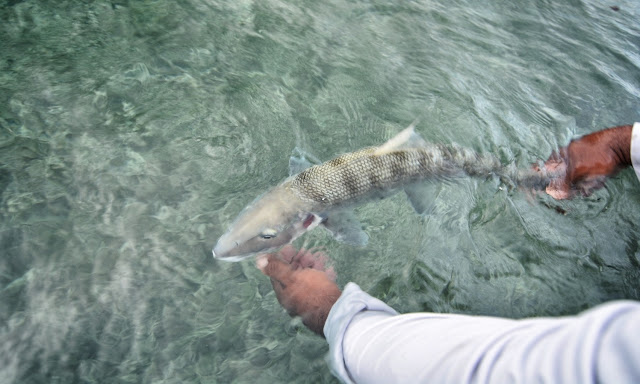 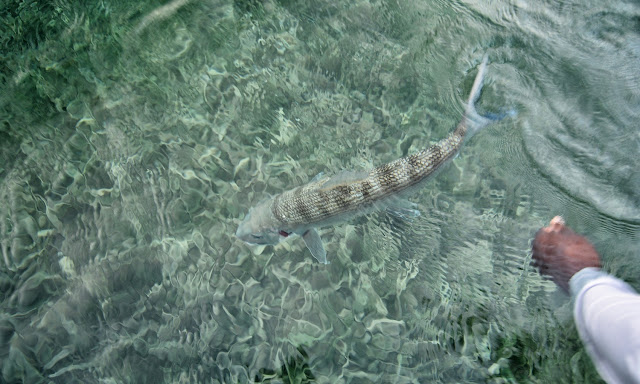 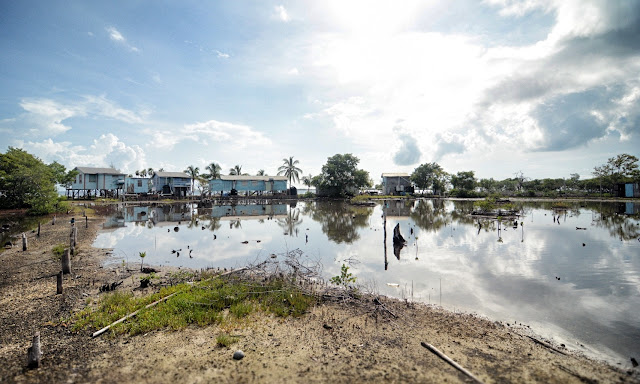 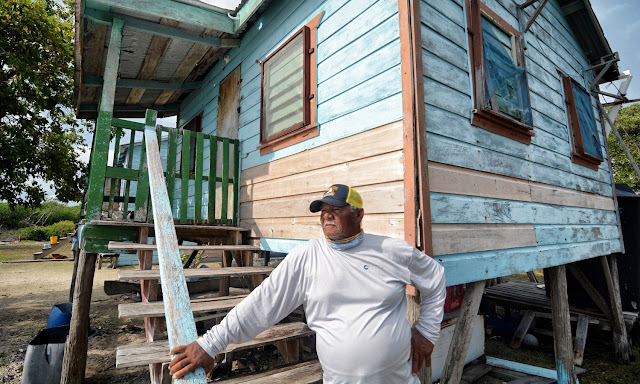 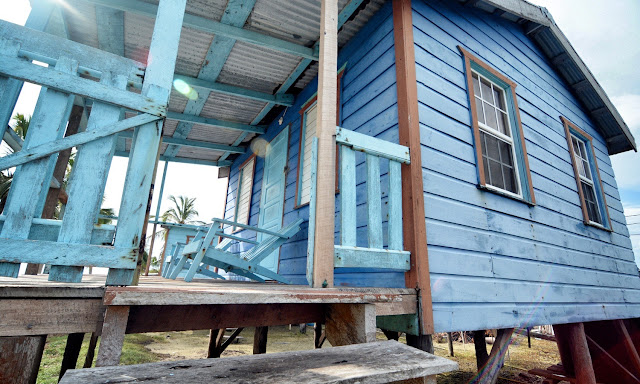 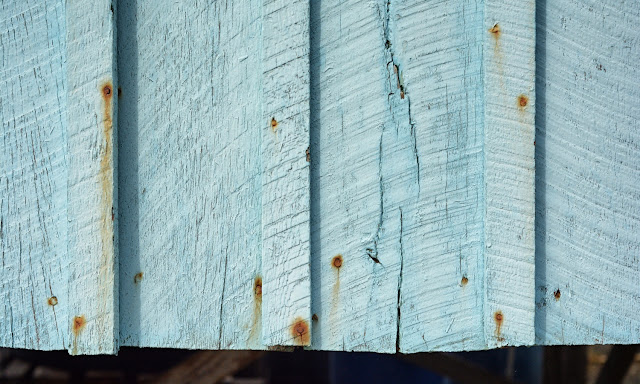 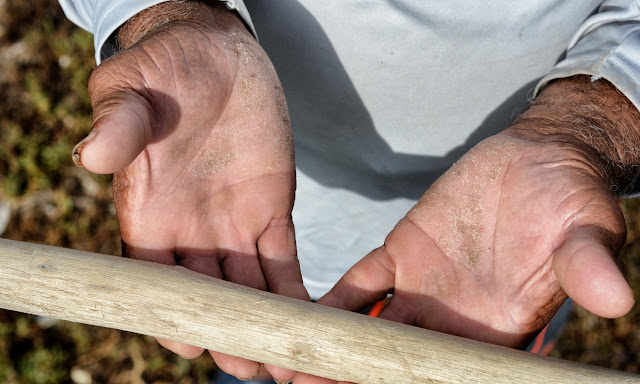 By Lincoln's math, he's poled a panga more than two times around the world in over four decades of guiding in Belize.  His gnarled and calloused hands are proof and they each perfectly grip the worn smooth wooden push pole.  Lincoln much prefers a wooden pole which he said can be bought on the mainland for a couple of dollars that he then hand and heat shape over the fire, into the perfectly straight (costs less than the Starbucks you're drinking right now) and strong push pole.  Call it Belize ingenuity.

On our last morning together Lincoln said that he needed to drop a package off to the caretaker at Northeast Caye where Blue Horizon Lodge is located.  This was a great excuse for a quick walk around and hear a few stories on what has been and what will to be in the coming couple of years as this island is reborn with a new fly fishing lodge.  The proximity of this island is perfect since many of the best permit flats are just a coconut throw away.

The other thing that I realized from spending time with Lincoln is that he realizes the incredible knowledge of guiding and the decades of experience fly fishing for permit that he has and is actively working to pass it on to the next generation of Blue Horizon Belize guides.  Watching Ransom working with Lincoln, it's evident that there is a tremendous amount of respect given to the "Permit Master". 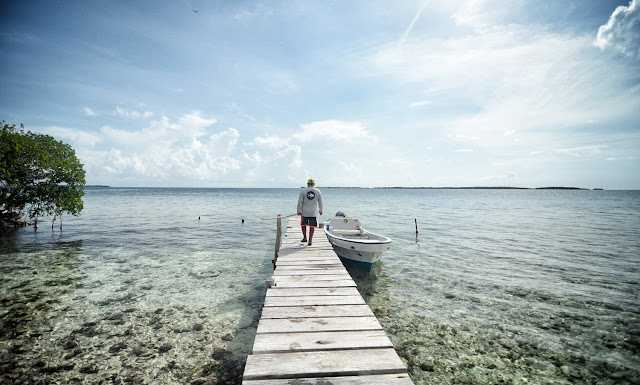 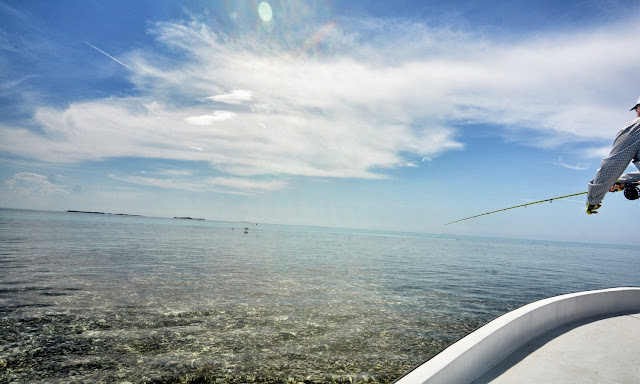 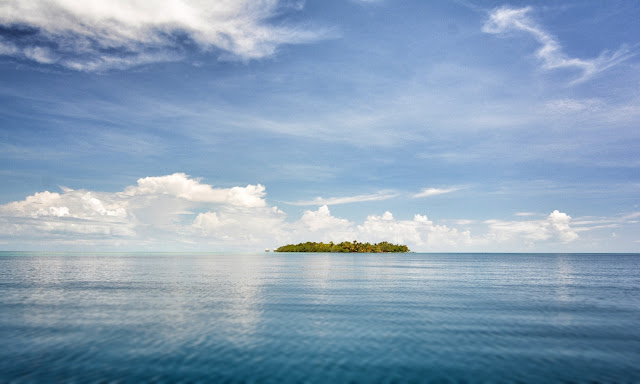 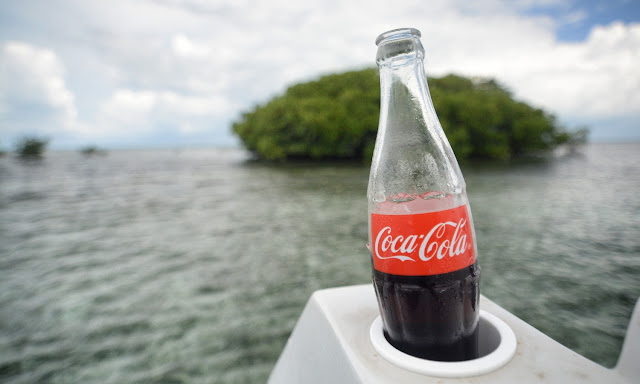 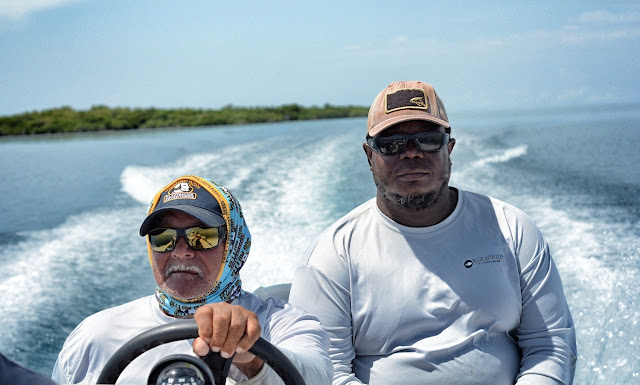 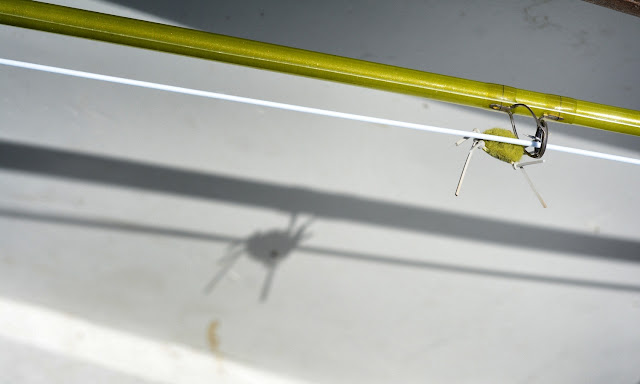 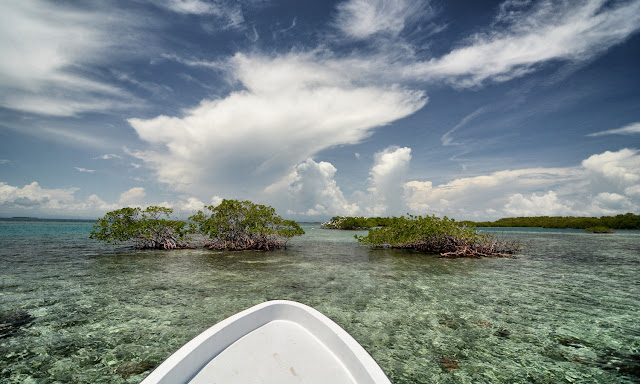 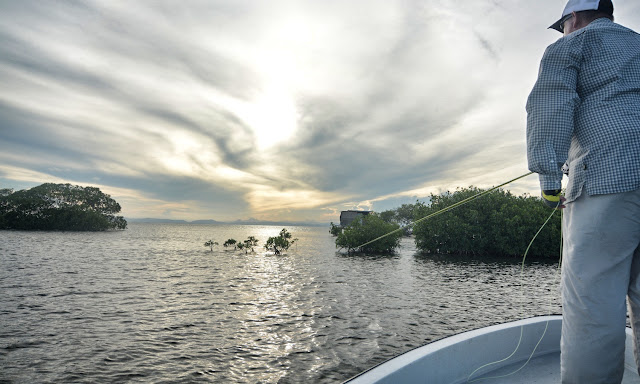 Three days on the water with Lincoln Westby (with two of those with Ransom Nunez as second guide) and I learned so much about fly fishing for permit.  I tried to soak up as much knowledge as I could and even though I didn't achieve success with a fly caught permit, the experience was well worth the trying.

Visit the Blue Horizon Belize website to trip plan your own unbelievable experience.
Posted by Cameron Mortenson at 6:00 AM

That Bandit sure gets a workout, huh?

David... Yes and more YES. I am absolutely blown away by how phenomenal the Epic Bandit is. Truly one of the greatest fly rods that I own.