Spring is quickly moving into summer but it's not too late to highlight the ten pieces of gear that have gotten my family and I through the last few months of fly fishing along with backyard and road trip adventuring.  The last couple months been filled with trips locally to the mountains and to the beach and then I was also away to Mexico and Vermont for a week at a time.

It's been a busy few months and summer doesn't look like it will be slowing thing down at all since I'll be heading north to Michigan later today for a week and a half filled with carp, smallmouth, pike on the flats of Lake Michigan and some night time trout gulping the big bugs and mice. 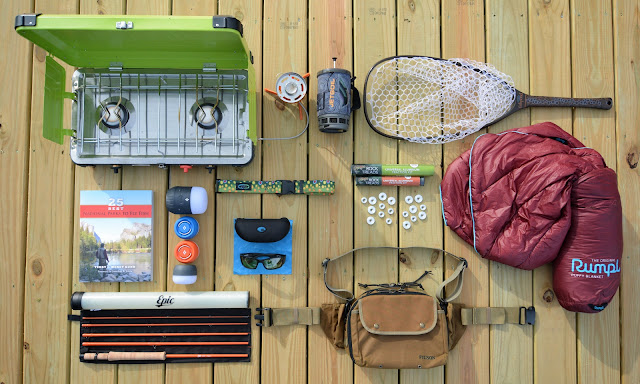 Here we go with "10 For Spring" that is a mix of spring trout angling and camp gear essentials.

BLACK DIAMOND MOJI CHARGING STATION & MOJI LANTERNS
A couple of years ago we picked up a three pack of Moji Lanterns and they quickly became our favorite lights around camp to hang in the tent, place on the picnic table for games, to keep close by the stove for early morning coffee, and I've found them to be handy in creating low light photography.  The Moji Lanterns come in several colors and each give off 100 lumens.

COSTA SUNRISE SILVER MIRROR 580P LENSES
The Sunrise 580P has been a long standing lens offering from Costa and earlier this year it got the step forward treatment when it became the Sunrise Silver Mirror 580P lens.

What often times is pushed as a low light lens to be used on the edges of the day or on cloudy days, I've instead found is really perfect for all day use especially when fly fishing in the woods were light may be streaming through the trees but you're caught under the canopy.  I also find these lenses perfect for distance driving and time spent on the firearms range while at work.

The Sunrise Silver Mirror 580P is currently available in six different Costa frames though my longstanding favorite is the Corbina frame.

EUREKA SPIRE XL & JETBOIL LUNA SATELLITE BURNER
When I gave up on my old green dual fuel camp stove last fall, I deep dived into researching, demoing, and cooking off of several of the latest propane fueled stoves which included the Eureka Spire XL for the past several months.

Though the Eureka Spire XL hits all the high points with pumping out 10,000 BTU's of cooking power, rotary ignition, removable grate, windscreen, adjustable rubber feet for keeping the cook surface level, the real genius of this stove is that it's designed to work with Jetboil Luna Satellite Burner.  This stove and side burner will make meal times a breeze with two burners for cooking while a third for hot drinks can stay rolling as well.

Not only is the Jetboil system crazy efficient in bringing water to a boil, the Grande Java Kit will have hot coffee in your cup minutes after push button ignition of the flame.  The coffee press works good in this system and I am beyond impressed with this entire set up.

The Spire Stoves are offered in two sizes with the smaller stove on sale currently with free shipping on the Eureka website.  The Luna Satellite Burner can be purchased separately through the Jetboil website or through other retailers.

FILSON FISHING PACK
I have a good friend that works at Filson who he tipped me off some time back that they were working on a new line up of gear for fly fishing and to keep my eyes open for it.  This spring brought this small but well thought out line up to light and immediately the Fishing Pack stood out.

After kicking this pack around throughout the spring, I continue to be impressed with the well thought out design and overall quality of the Fishing Pack.  Old school fabrics meet brass button snaps and heavy duty zippers are mixed with smartly designed spaces, multiple compartments to handle fly boxes, tools, and accessories.  The zip down work station comes in handy for those that want to forgo fly boxes and instead fill the foam inserts with the day's needs.

The Fishing Pack also features two pockets for water bottles or one (or two) to slide a can of your favorite brew to carry along.  This pack features heavy duty waist belt, shoulder belt, and a grab handle making for ease of wear with options.  The Fishing Pack is everything that you would expect from Filson and more.

FISHPOND NOMAD EMERGER NET
Over the years the Nomad Net line up has continued grow and currently boasts ten different landing nets from wading nets to boat nets in a multitude of sizes and color finishes.  A new favorite in the line up is the Emerger Net which features a longer handle for extra reach and skinned in a brown trout design.  The Emerger Net is the third smallest net in the line up and perfect for both wading, kayak, canoe, and raft use.

I've been using Nomad Nets for years now and always impressed by the quality of the carbon fiber/fiberglass composite of the build but also the depth and flat floor of the rubber netting.  Fish go into these nets and stay in until they are ready to be released.

ROCK TREADS
Longtime readers know that I am always on the lookout for new and up and coming companies within the fly fishing industry and recently have gotten to know the folks at Rock Treads.  Their story started with a light bulb moment involving an aluminum canoe and the inspiration to design a better way to wade moving water.

Rock Treads are available in different sized kits with the Fry Kit and the Pickle Kit giving anglers the choice of how many aluminum discs in two or three sizes needed for their boots.

The Rock Treads website has solid installation notes on their website and I'll be doing a follow up review in the coming months.  Early option is that these are a great idea and we'll see how they hold up.

RUMPL ORIGINAL PUFFY BLANKET
It's been a long (think loooooonnnnnngggggg) time since I've had a "blankie" but when the Rumpl Original Puffy Blanket arrived on the doorstep, I knew I was going to be fighting the wife and children for it.

The Original Puffy Blanket features a ripstop nylon shell filled with synthetic insulation making for the ultimate home, camp, car, and wherever else tech blanket.  Tight roll the puff blanket up and it fits perfectly in the included stuff sack.

We recently made a quick weekend trip from South Carolina to Michigan (and back) and my wife and I took turns sleeping on the way up.  You can't curl up much in the front seat of a Toyota 4Runner but the Original Puffy Blanket helped make for some comfortable and needed nap time.

The Original Puffy Blanket is available in a multitude of colors and in three sizes of Throw, 1-Person, and 2-Person and should definitely be part of your adventure vehicle's "Go Bag".

Puffy Fans, also take note that Rumpl just launched (and already fully funded) a new project on Kickstarter with the Original Puffy Poncho that is worth a look too.

The Epic 476 blank was in the original line up from Swift Fly Fishing and has quite a following for good reason.  Last year they introduced the Epic 476 Packlight and it's quickly become my go to for off the trail trips or anytime that I want to carry a fly rod along but don't have a lot of space.

The Epic 476 Packlight is a progressive taper in glass and I consider this a "Do All" type four weight that can cast dry flies with ease while also having the ability to nymph and even cast small streamers effectively as well.  I would have no problems traveling the world with this capable four weight.

The Epic 476 Packlight is available three different ways from Swift Fly Fishing and can be purchased as a Blank, Ready To Wrap Kit, or a Studio Built Fly Rod direct from the New Zealand shop.

WINGO WADING BELTS
Wading belts don't have to be black and boring and it took the folks at Wingo Belts to make bring some fun and color with two dozen choices featuring custom art designed wading belts that are built to last.  The Wingo Wading Belts made of a heavy duty 1.5 inch wide polyester with quick-release buckle and are adjustable to 45".

Wading belts are essential gear and might as well have one that looks good too for the long run.

Wingo Belts have been around for a couple of years now and their "Made in U.S.A." products span from Wading Belts to Everyday Belts (Bottle Openers or D-Rings) to Key Fobs and they didn't forget Dogs either.  It's also worth noting that they have a strong Rep Your Water Collection that is worth as well.

25 BEST NATIONAL PARKS TO FLY FISH
School's out and many families are planning trips that often include time spent at one or several of the National Parks dotted across the United States.  Many of these National Parks have known, or in some cases, little known fly fishing opportunities.  One of the latest releases from Stonefly Press is helping unlock these favorite places with "25 Best National Parks To Fly Fish".

This book was written by Terry and Wendy Gunn and they tapped local guides and other sources in creating a treasure trove of information which covers not only the angling possibilities in a highlighted park but also includes detailed maps, fly shops, closest airports, hotels, camping, nearest hospital/urgent care facility, cell service availability, and more.

That's a wrap and it's time for summer to start.  What are your favorite pieces of gear for the spring season?
Posted by Cameron Mortenson at 6:00 AM

The 25 best National Parks to Fly Fish segment reminded me to note that we seasoned anglers that are 62 and older can by a Lifetime Pass to all National Parks for $10. Its true. I had to make the ranger at RMNP tell me twice. I am 64 and had never heard of this. I also heard that this deal is about to change. Certainly not for the better. So get your Pass. Rick

Thanks for the heads up, Rick!

You're welcome. Further research indicates that by year's end, the pass will be $80 and may not include as many bennies. Rick

Great info all around. Thanks.