What's All this Golf Talk About?

If you follow The Fiberglass Manifesto on Instagram, you might have wondered what all this golf talk is about over the past six months or so.  Or you might have wondered why there's Retro Fly Golf Tees in the T.F.M. Store.  Or maybe you haven't thought about it at all and if so, maybe enjoy a quick story...
I guess I was maybe ten years old when it started.  My dad would wake me up at sunrise and we'd drive over to the local municipal golf course in Lansing to be the first ones out on a Sunday morning.  We'd be there so early in fact that the pro shop wouldn't open for at least another hour and my dad would pay for our round on our way off the last green.  That head start wasn't that my dad liked to get up early but instead he knew that I was going to need quite a bit of time to get through those nine holes without slowing the play of more experienced golfers who would show up when the course opened.
We didn't golf a lot but it was something that my dad really enjoyed.  I enjoyed it too through didn't do it enough for it to really take hold.  Then, during my late teen years, I started fishing and then fly fishing which took all my focus for the next several decades.  I would still golf with my dad maybe once a year when I was home in Michigan or if we met in Florida but it wasn't something that I really was putting much focus on.
Truth told, I always thought that I didn't need another hobby. 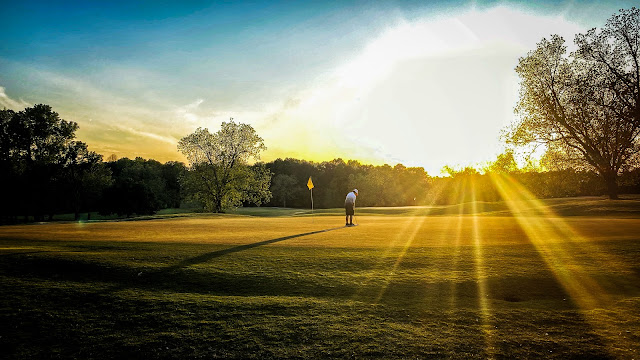 Fast forward a few years and our son started spending parts of his summer in Michigan to be with his grandparents.  My dad, who's 75-years-old now, has been retired for a few years and in several golf leagues.  He's always made sure Finn had clubs his size to play with and they would poke around the golf course and range together.  My dad, who I would say is a lot more patient now about the game, has loved having a "little buddy" on the golf course with him.
Finn came home last summer with a real zeal for golf.  My dad had put him in a clinic at the local country club for a couple of weeks and they had played together almost daily.  He had bought Finn a new but inexpensive set of golf clubs just to make sure he was going to like.  Like it Finn did and he started spending an hour or so each day in the yard hitting balls into a net.  He was also talking about golf non-stop and even thinking about trying out for the team at school.
As last summer turned to fall, with Finn still focused on playing more golf, my mind started changing on all of this since if this was something that really resonates with him, then I should be playing.  And, with my dad playing some of the best golf of his life, it was even more reason to get out with him more than just once or twice a year.
Finn and I spent last Christmas break golfing at a few courses around here, then more rounds in Florida with my dad and aunt while visiting them in Orlando in February, then more golf during spring break that fell on Masters Week with my dad visiting for a few days, and then more golf last month for Father's Day in Michigan before heading up to Beaver Island.  I'm finding it's possible, and a whole lot of fun, to wedge golf in between fly fishing though admittedly it's more gear to carry along.
So here I am eight months later.  I've built my golf bag around an older set of irons that I already had with a club fitting where I picked up a new driver, 5-wood, and 4-hybrid.  Soon after, I added a set of wedges and a putter.  I've also deep dove into learning more about golf and surprisingly, there are some similarities to fly fishing with small shop brands and other interesting makers within the space that are a fun follow.  I'm happy with everything in my bag right now and just working on just getting better with my clubs through playing.  It's a process and I'm really enjoying learning something new.  I also like when things are hard and this game can certainly be that.
Finn, after spending two weeks up in Michigan this summer with my dad playing golf each day, came back home more confident with two rounds where he's broke 100 up there and then did it again over the weekend at one of our local courses.  The kid is getting good and quickly.  He's signed up for a few youth golf tournaments through the summer and I'm looking forward to watching him play.
Finn's planning on trying out for his team at school which means more practice.  I don't mind since that will likely mean I'll get to play more as well.  I sure need to get better to keep up with with the progress that he's making as a young player.  Swing coach, please.
So, where's this all going?  I'm not sure but do know that the time that I'm spending with Finn and my dad, are memories that we'll have share forever and it's not lost on me that this is a game that we can play together no matter the span of our ages.
Maybe I did need to take on another hobby after all...
Posted by Cameron Mortenson at 6:00 AM

The only thing that matters is you are spending time with your dad and son. What that looks like is up to you but following others passions often leads to new discoveries about ourselves.

Unknown... I totally agree. I'm having a good time with this on many different levels.