UPDATE - The winners were chosen by random number generator and emails have been sent to each winenr.  Thanks to each of you that sent emails in.  I had a good time going through the nearly 500 emails.

A few weeks ago I was going through my stash and found three ECHO Bad Ass Glass Quickshot 8-weights that I had been sent to me some time ago to use for a giveaway.  Life got in the way and that contest never happened but it got me thinking that it would be fun to handpick some other favorite fly fishing gear and apparel items that make summer even better.  It didn't take too long until the plan was firmed up and today we're kicking off the 'Let's Have a Bad Ass Summer' giveaway.

So, beginning today and continuing through the end of July, I will be taking entries through email where I'm looking for what you're doing to have a "Bad Ass Summer".  It's worth your time to send an email as there are three seriously stacked prize packages that total over $5,000 in gear and gift cards that are up for grabs. 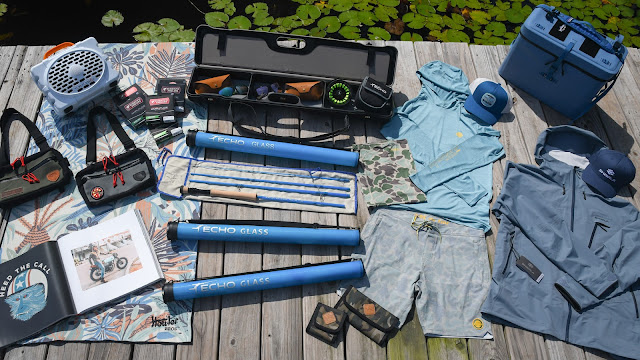 WHAT WE'RE PLAYING FOR
It's fun to give away fiberglass fly rods but it's REALLY fun to totally kit out three prize packages with some of my most favorite gear and apparel.  As mentioned above, there's over $5,000 in gear and gift cards wrapped up in these three stellar prize packages.

The three winners of the giveaway will be chosen by random number generator the week of August 1, 2022, and the three winners will be contacted by email that they have won.  Winners will also be announced on T.F.M. and the T.F.M. social media pages.
MAYBE FOLLOW ON INSTAGRAM
Giveaways along with the many other things that happen on The Fiberglass Manifesto wouldn't be possible without the support of the companies and brands within fly fishing and the outdoors.  I've been really fortunate over the years to develop a circle of industry friends who get what's going on here and I really appreciate it.

If you're not already, please consider following the following companies on Instagram who have supported this giveaway...
ECHO Fly Fishing
TURTLEBOX
Sea Run Cases
Skwala Fishing
BAJIO Sunglasses
Scientific Anglers
Patagonia
VEDAVOO
Howler Brothers
Marsh Wear
I think that's about it.  Get your email in before midnight on July 31st and look for some gear reviews and other content over the next couple of weeks to talk about some of the gear that is part of this giveaway.
Posted by Cameron Mortenson at 6:00 AM