Places With No Names - A Day In Hopper Heaven

There is no denying that I had a lot of excitement and anticipation built up for this trip to Wyoming with the Fly Shop of the Bighorns.  It didn't help that I had a couple of friends (Senyo and Schmidt, I'm talking about you two) who were both calling or sending text messages which further hyped me up about what I was about to see while spending a couple days on private ranch water access through Rock Creek Anglers.  They had both just returned from their annual trip to the area and knew what I was in for.  All I can say, and hopefully the dozen and a half images say it too, that this place certainly did not disappoint in any way.

Over the years, Rock Creek Anglers has been able to work out private access to select ranch properties near and around the Sheridan area and when I jumped in the truck with Guide Justin Gerard, he took me what has to be one of the crown jewels of the area.  Meadows and fields gave way to red rocks and canyons with tall buttes not too far off surrounding the steam that we would spend the day on. 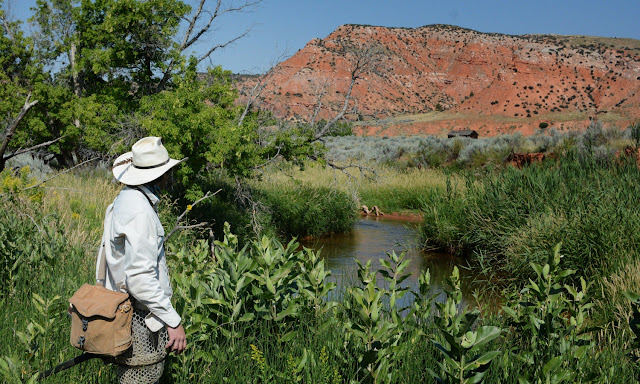 Along with a slender cold water trout stream that weaves it's way through meadow and canyon, this many thousand acre ranch is also home to significant Native American and early American west history.  Justin Gerard had done quite a bit of research on the area and it was so interesting to think back over the last several hundred years on what had happened on the ranch and in the nearby mountains as well.

After a long drive in, we stopped in a stand of old growth forest and geared up for a day on the water.  As we started walking towards the creek small hoppers flew up from the ground all around us and that set the tone for the morning and into the early afternoon.  Brown and rainbow trout were looking up and long careful casts near the undercuts and deep pools were often rewarded with a rise. 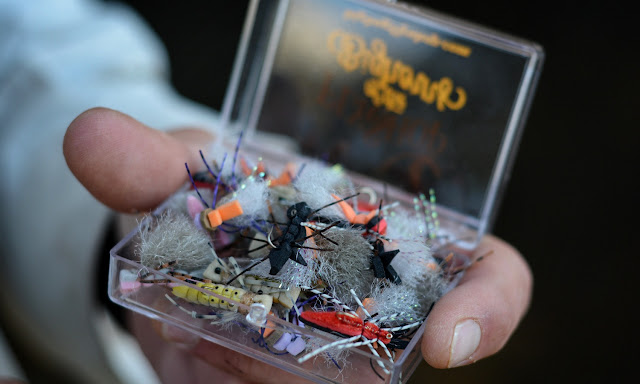 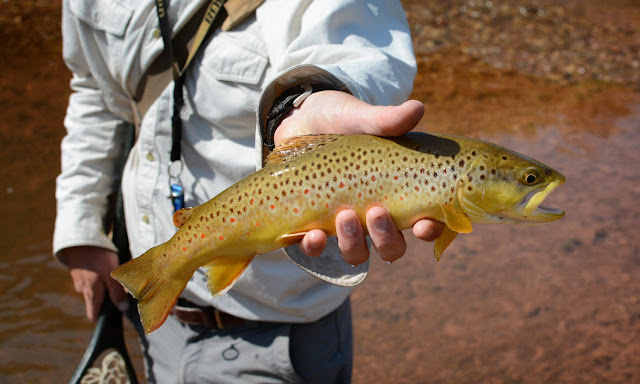 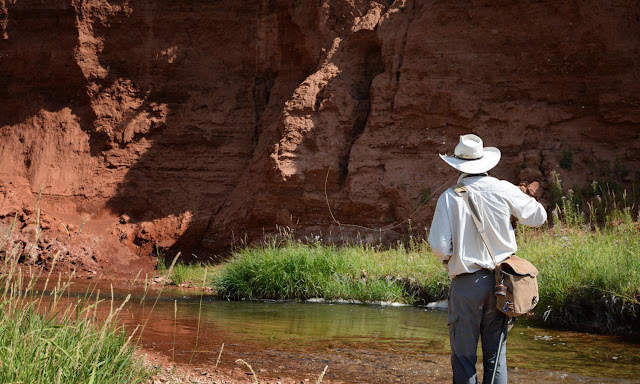 Even though it was a lot of fun to blind cast to all the likely spots, the most memorable moments of the day were when Justin would scout ahead and then call out what I needed to do and where I needed to present the fly.  Within minutes of walking to the water, Justin saw a larger rainbow slowly fining in the tailout of a long run and called it out.  I laid the cast well upstream of the trout which caused it to look up, follow the hopper with it's nose just under the surface, and as the fly was just about to float past, the trout turned back slowly to suck it in.  That more or less set the tone for the day and we enjoyed so many cool eats on hoppers.  This place was Heaven. 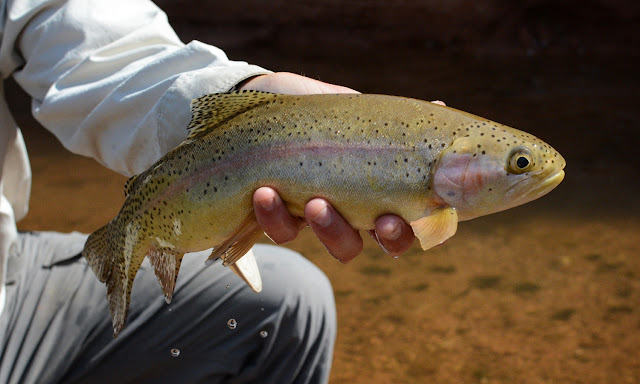 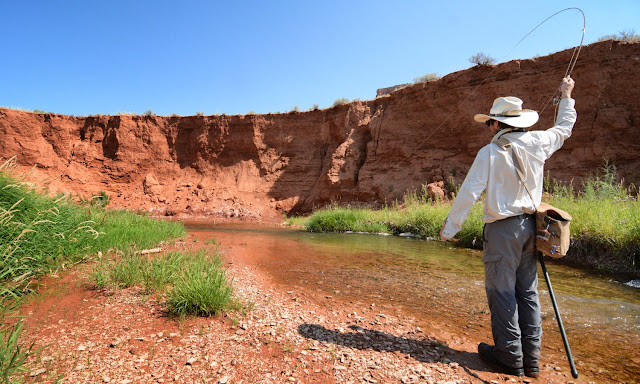 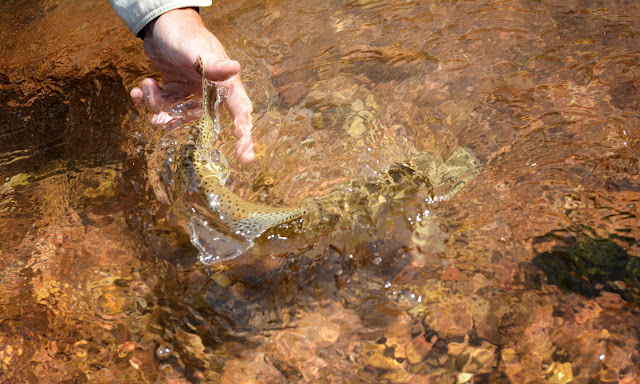 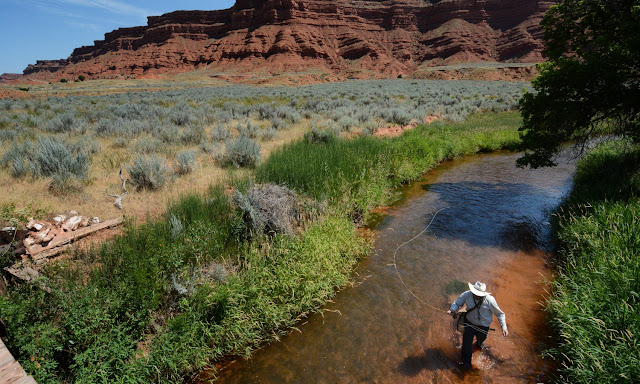 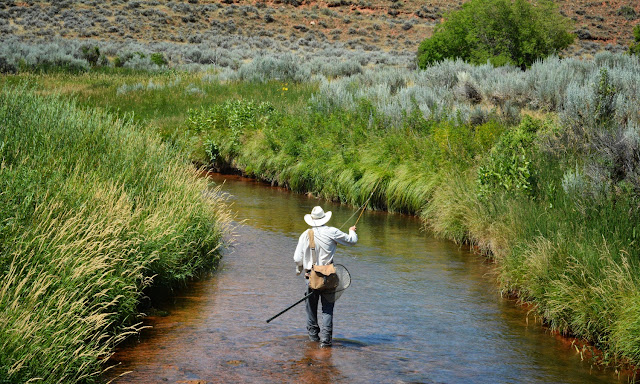 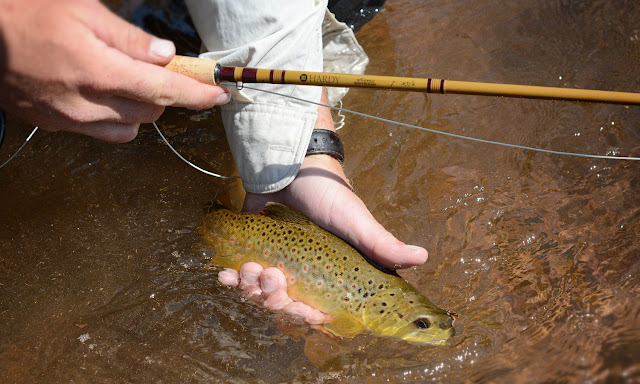 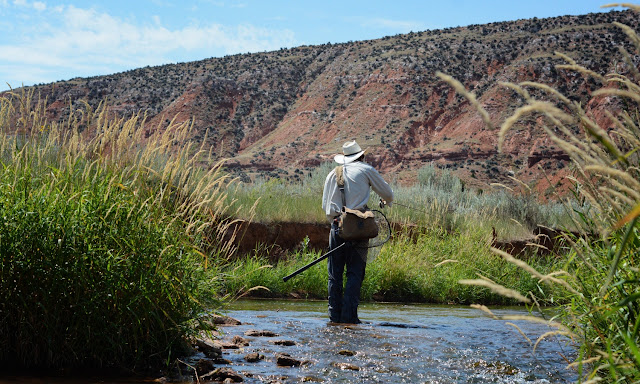 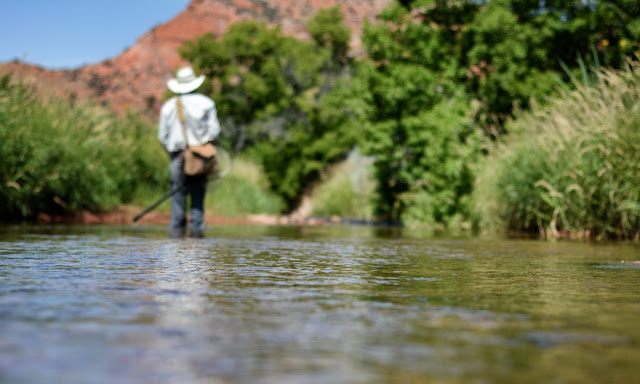 We spent the morning working our way upsteam and only made fly changes when several trout would snub one hopper only to fall all over next.  By lunchtime we had made our way back to the truck and Justin set out chairs and brought out lunch in the shade.  It was a warm summer day but the tree shade and breeze made it quite comfortable.  Justin and I talked about more of the history of the area and what guide life is like and how he splits his time between the water and grooming ski slopes in Jackson through the winter.

After lunch we started off where we left off and continued upstream to the canyon.  The cloudless afternoon kind of put the trout to bed but we still found a few just where you'd expect one to be.  Around every corner I continued to be impressed by the beauty of this property.  I had just as much fun handing over the fly rod to Justin and stepping back to take a few photographs. 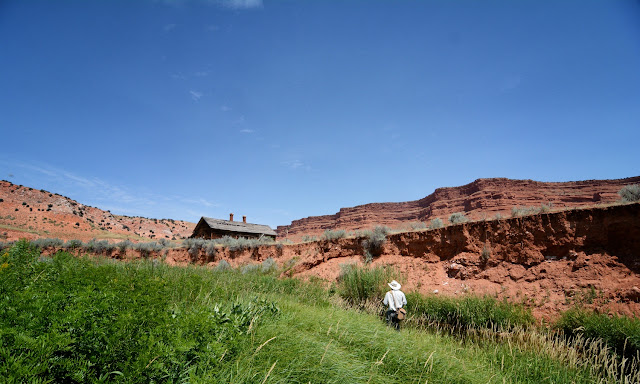 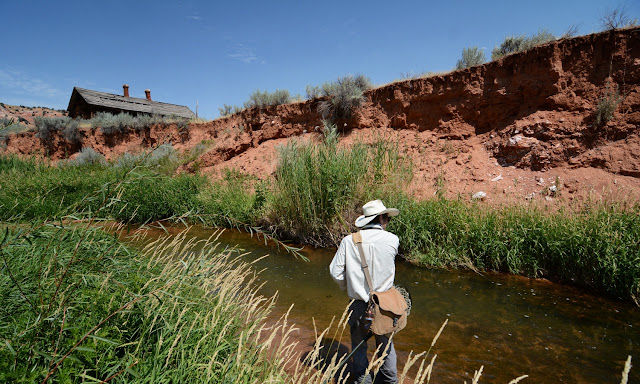 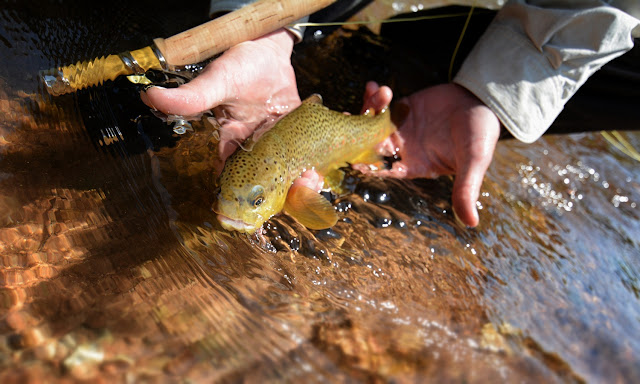 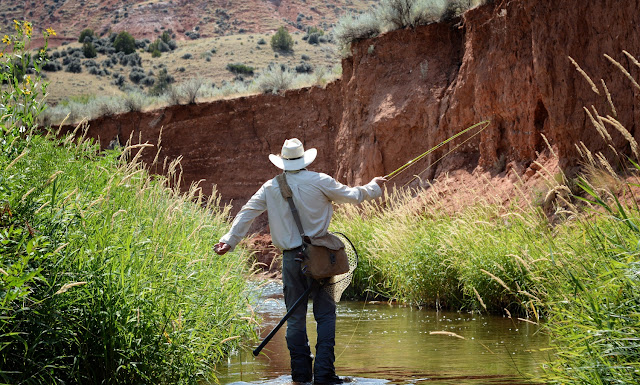 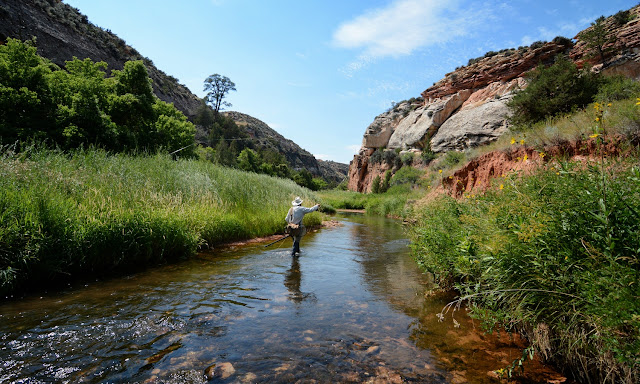 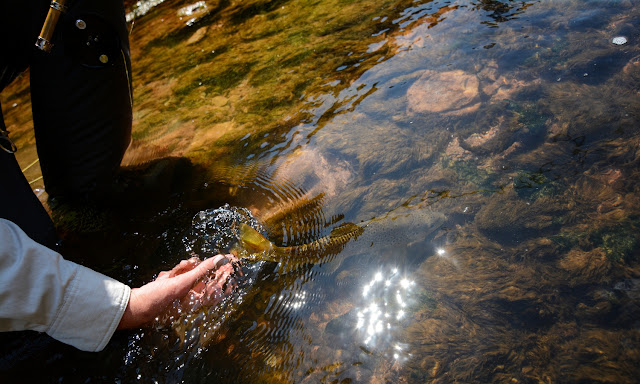 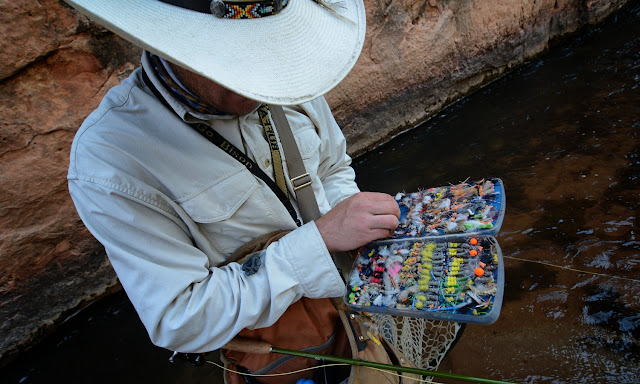 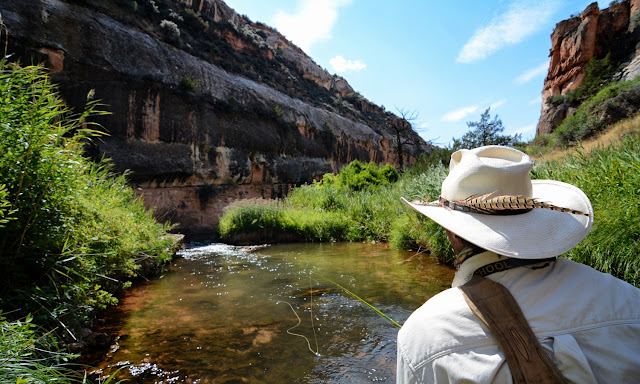 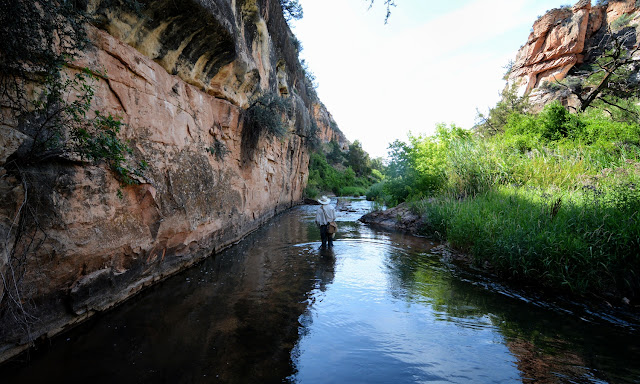 By late afternoon it was time to circle back to the truck and Justin and I spent another hour or so just talking under the trees.  Even if the fishing was done for the day, I wasn't ready to leave.  This place was just that special.

GEAR NOTES - I tried to limit the number of fly rods and fly reels that I took along on this trip and only packed fly rods that I thought would be well suited for the type of water I'd be on.

The first half of the day I used the soon the be released Hardy Sirrus 7' 3/4 weight which was paired with the Hardy Marquis LWT fly reel and 406 Fly Lines four weight fly line.  I am excited about this new glass offering from Hardy and it has a slow and deep loading action.  It turned over an eight foot leader and hopper with no problem and the Marquis LWT is one very sweet clicker.

The second half of the day I put together the Swift Fly Fishing Epic 480 which was paired with a Abel Reels TR2 and Swift Fly Fishing Glassline four weight double taper fly line.  This is without a doubt one of my most favorite dry fly outfits and the guide couldn't put it down either.  I'm finding that the Epic fly rods are a great "first glass experience" for the guides that I fish with since the tapers are little quicker than they might first expect.  The Epic 480 is always near the top of my list of suggestions when someone is looking for an all around dry fly (and more) fly rod.
Posted by Cameron Mortenson at 6:00 AM

I cut my teeth on those red dirt Bighorn creeks using grasshoppers of the live variety before graduating to the foam kind with a 4wt Scott F2. It is a heck of a lot faster to catch one in a fly box rather than in the sage brush or alfalfa!

gman... You would LOVE hoppers here.