Unity WIth The Universe

Last night when Christian Hörgren and I arrived back on the mainland from Beaver Island we went to Adam Tsaloff's house where we would be staying for the night.  When we arrived Adam handed over a package that had arrived from Tom Morgan Rodsmiths.  The package was two cardboard tubes which had been taped together with one filled with various fiberglass blanks to take back to Sweden to build and then a second tube which held Christian's seven weight "Unity With The Universe" build. 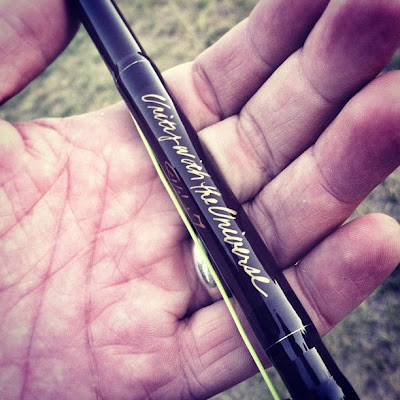 The presentation of this fly rod from the fabric tube cover, to the over the top six sided metal fly rod tube, to the heavy weight fabric rod sock, to the flawless build itself made us quickly realize why Tom Morgan is charging what he is for finished builds.  This was just beautiful start to finish.

We spent an hour or so casting this fly rod with several different fly lines until almost dark and found it to be wonderful and everything that Tom Morgan said it would be.

It's unlikely that any of us we'll see to many of these Tom Morgan Rodsmiths fiberglass builds which have been finished out in his shop and Christian has promised to take a full set of photos when he returned home to Sweden that I'll be able to share with an upcoming T.F.M. post.
Posted by Cameron Mortenson at 6:00 AM