As plans were coming together for our spring break road trip, we were in the thick of Finn's school golf season.  Almost daily after school practice started sometime in January and continued into February with match play beginning in early March.  He was a little worried about not swinging a golf club for over a week during our trip and while comparing the map of where we'd be, where we wanted to go, and where we would end up, we figured out a way to fit in a few rounds of golf that really helped make our trip something special.

If you're wondering why I'm talking about golf on what's usually a fly fishing focused website, I explained it in this T.F.M. post awhile back and if you're following along on Instagram, there's been quite a bit of golf talk there as well.  The truth of it is Finn is REALLY into golf right now and that means I'm REALLY into golf right now too.  I don't hate it.  I've actually embraced it even if the scorecard doesn't reflect it.

NORTHWOOD GOLF CLUB
As mentioned in "The National Parks" post, we wrapped up that part of our trip by staying with family in Turlock which meant an early morning drive up to Monte Rio.  My aunt is a longtime golfer and she wanted to came along with my son and I for what would be a special and unbelievable day of golf.

Northwood Golf Club had already been on my radar but it was a recent episode of Adventures in Golf that had me jonesing even more to experience this course.  Dr. Alistar MacKenzie designed the Northwood Golf Club in 1928 and this striking 9-hole track weaves its way through a mature redwood forest with a carpet of lush grass. 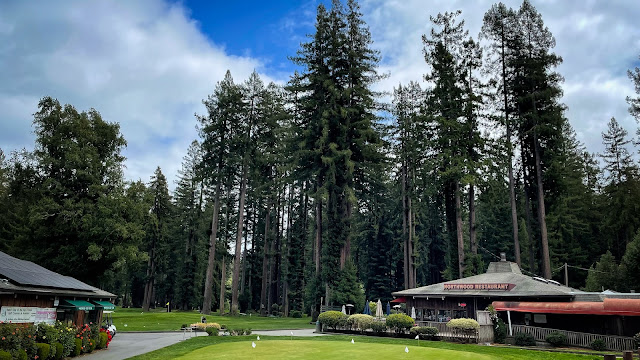 We left my aunt's house at 5:00 a.m. since we were worried about traffic along the way and ended up arriving a couple hours before our tee time.  We had breakfast at the cafe next door, putted, warmed up, and they ended up starting us a bit early.  The vibe of the place was super laid back and the three of us couldn't have had more fun playing the track twice to make 18.
Northwood Golf Club was everything that I'd read about, seen online, and so much more.  I mentioned it in an Instagram post after we played that it was hard to put this place in perspective and scale with massive redwoods looming over slender fairways and what seemed like smallish greens.  It's a special and magical place.

My only suggestion for Northwood Golf Club is that they design a logo for the course built around one of the carved wooden owls.  These carved owls are iconic to the course and I would have loved to have had a visor or cap with a simple and low-key embroidered design on it. 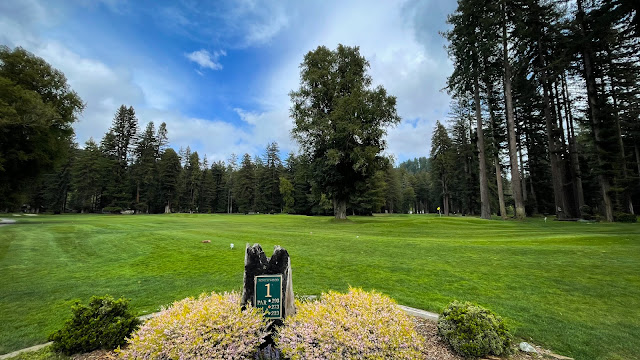 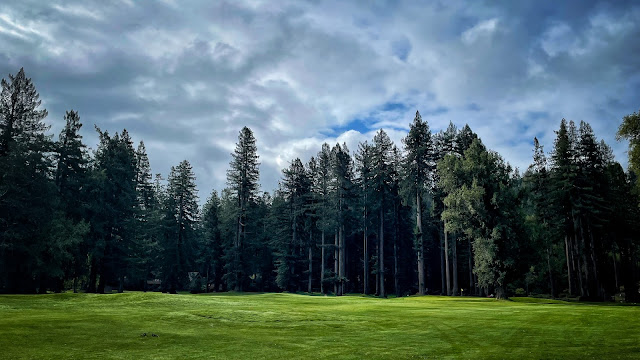 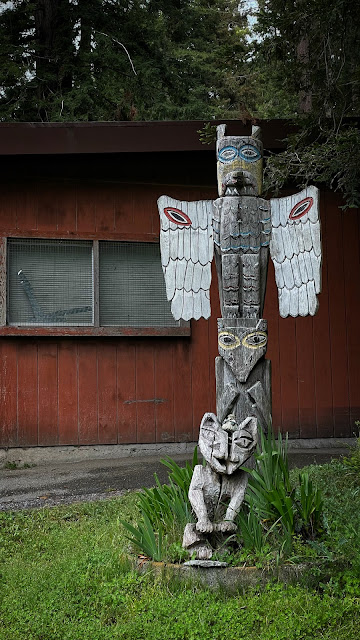 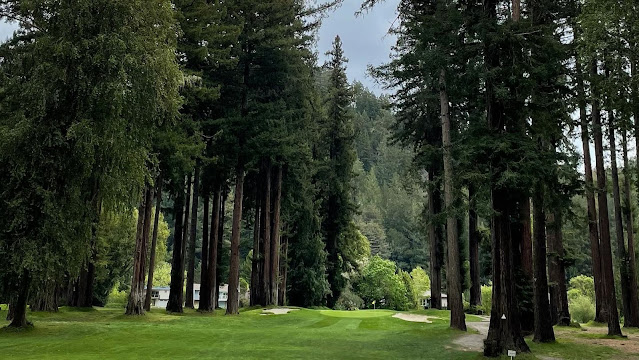 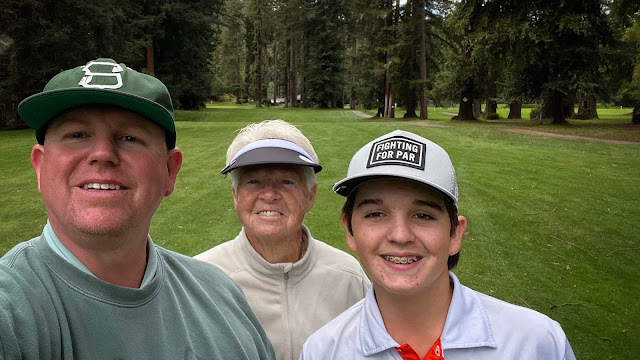 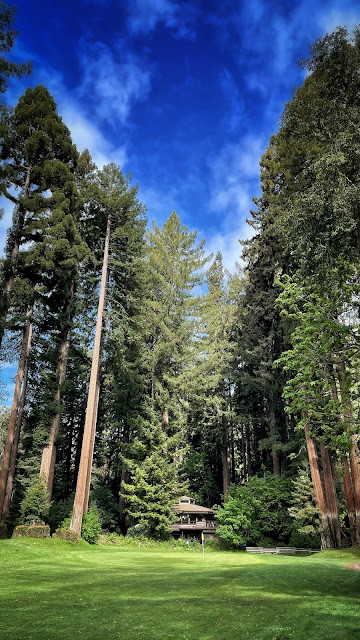 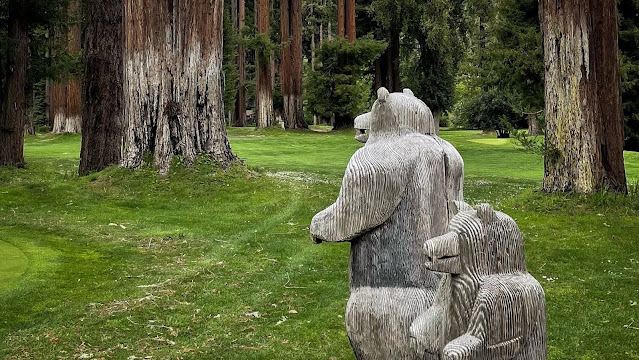 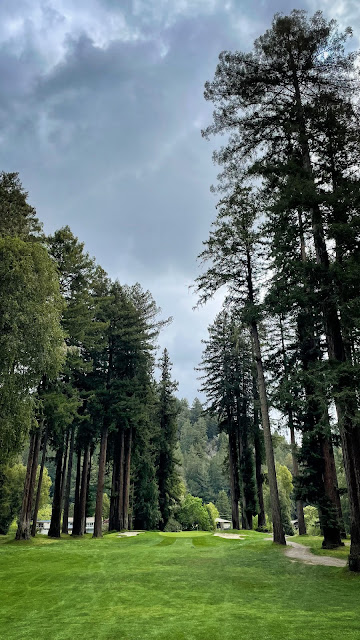 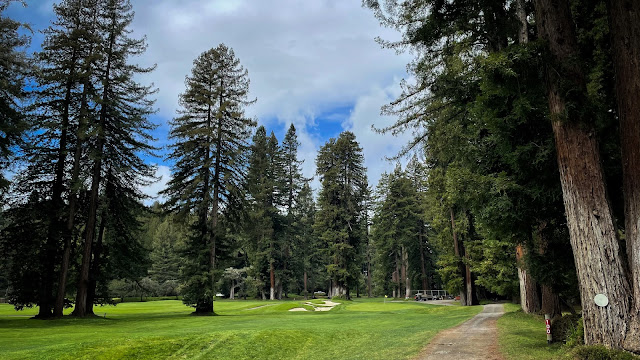 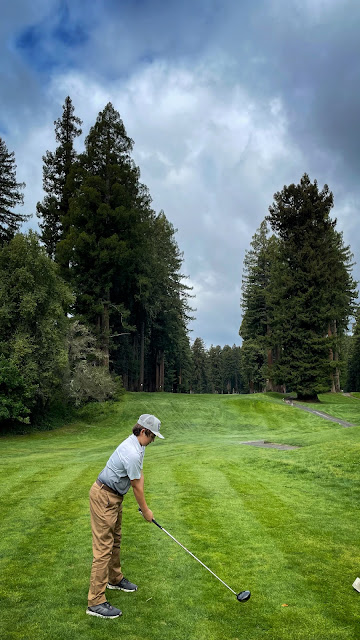 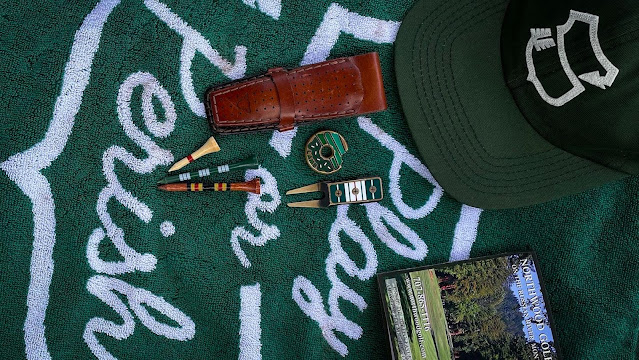 PACIFIC GROVE GOLF LINKS
A couple weeks before we were leaving on our trip, my buddy Jay sent a text asking what our route was through California.  He knew that we were spending a day at Northwood Golf Club but wondered where we were headed afterwards.  I sent a text back with our route through San Fransisco to Monterrey and then taking the Pacific Coast Highway south all the way back to Los Angeles.

He immediately called and said, "You've got to play the back nine of Pacific Grove."

The back nine of Pacific Grove Golf Links has been dubbed "Poor Man's Pebble Beach" and poking around on the internet a bit confirmed that we needed to make time for a stop there.  And it only made sense that if we were going to carry golf clubs all the way to California, playing more than once just seemed like a good idea. 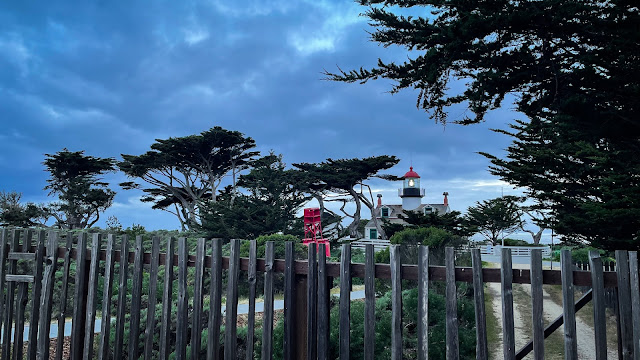 After leaving Monte Rio, we traveled down to Monterrey for the night and had an early morning tee time just to play the back nine.  We didn't have time play the entire course and for the first 75-minutes of the day, it's allowed to skip the front and go directly to the back.

We had a 7:20 a.m. tee time which had us there as things were waking up.  The back started by the Point Pinos Lighthouse with two holes without too much view and then as we walked to the third tee box, the rest of the back opened up with a panorama of crashing waves, rocks jutting out of the surf, and a track that was laid out just perfectly amongst the elevations, the wind shaped trees and rocks, and rough.
Finn and I worked our way through the nine holes and actually finished earlier than we expected.  We were wishing that we could play the back again but there just wasn't time.  We needed to continue on to the last part of our trip. 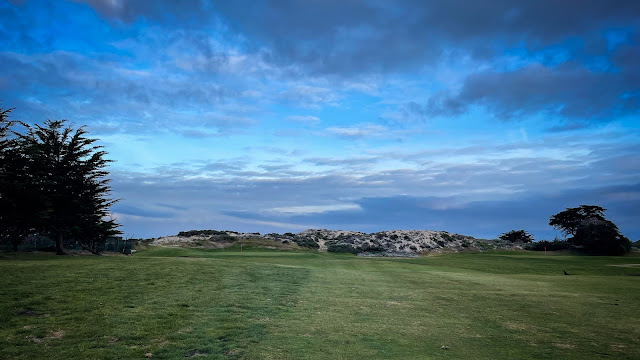 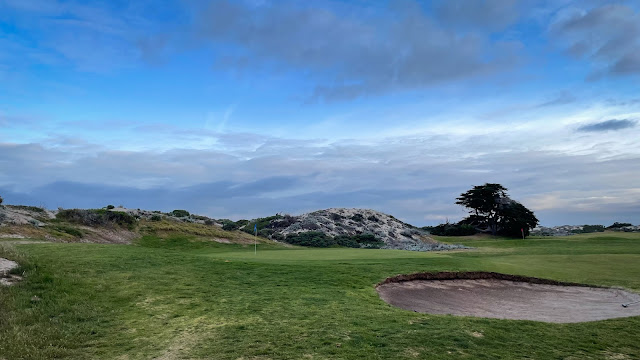 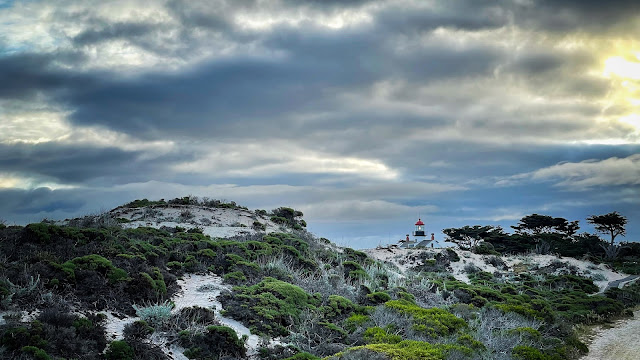 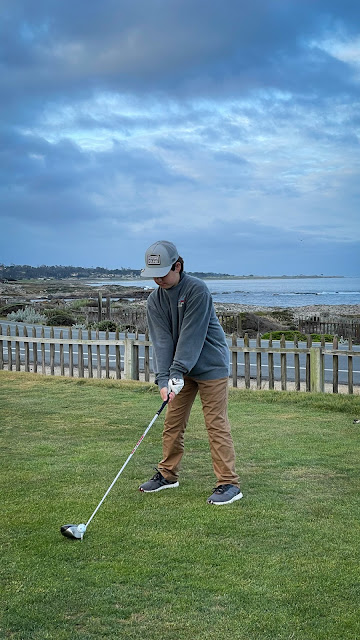 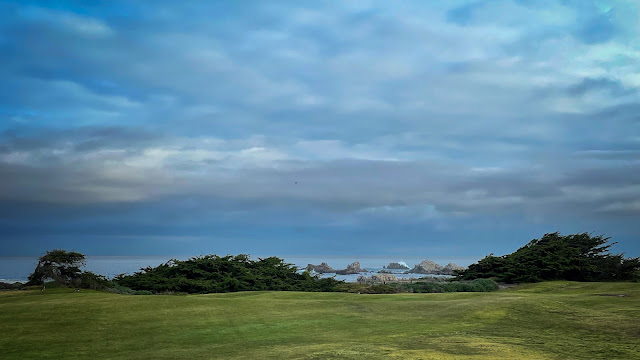 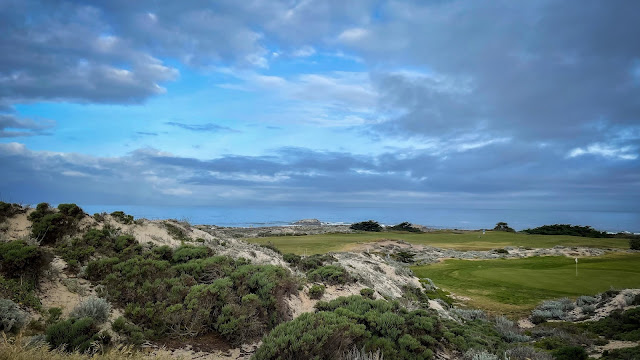 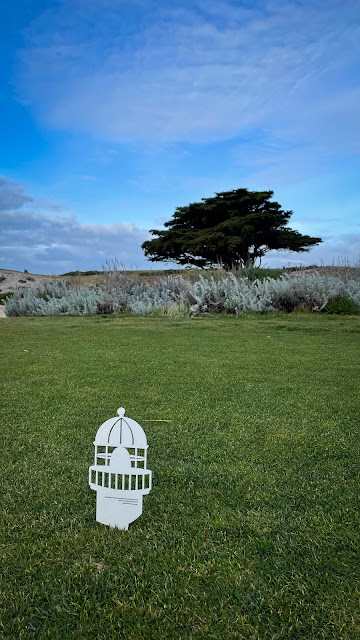 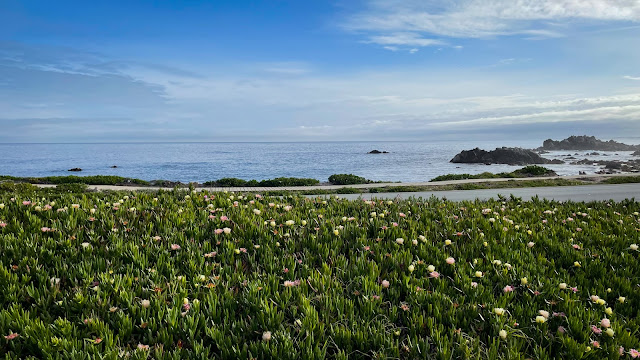 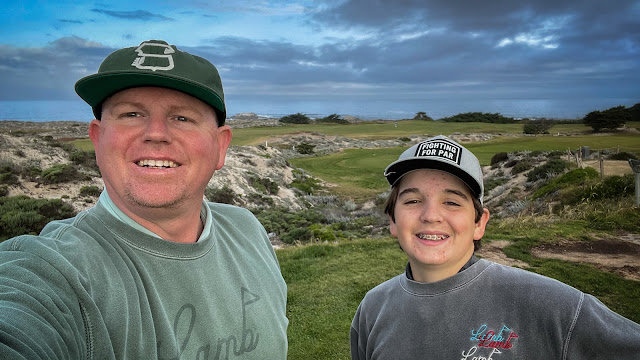 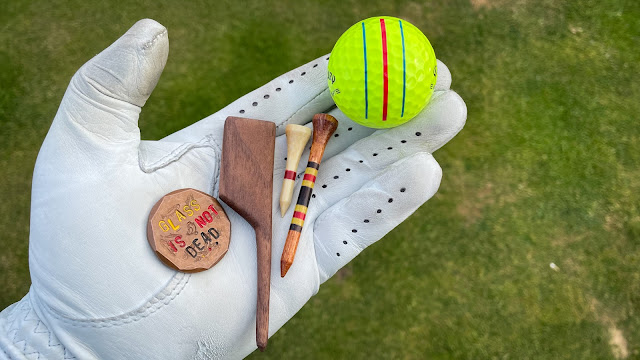 The neat thing about both of these golf courses is that they are public and the cost is much less than you'd expect for the quality and experience.  We were just blown away in all respects by Northwood Golf Club and Pacific Grove Golf Links.  We'll be back to both places for sure...

Where else should we have thought about playing in those areas?  Please email to let us know.


A FEW NOTES ON TRAVELING WITH GOLF GEAR

I am very familiar with airline travel and how to get fly rods and all the gear needed to wherever we're going but golf clubs, and two sets at that, was a new problem to solve.
A few weeks before the trip, I ordered a Club Glove Last Bag (the smallest size) and Finn and I each picked out eight or so clubs to place in my Jones Trouper golf bag. This made for one over packed golf bag but everything somehow fit.  We were able to pack golf shoes, rain gear, golf balls and everything else needed in the travel bag.  It worked but we were pushing 45 pounds or so.
Having just one golf bag meant that we carted instead of walking.  I would have rather walked both of these courses to experience them more fully.  Next time.
Speaking of half sets, I've been tracking on the idea of less is more for awhile (Thanks @lessthan14 and others) and honestly, I didn't really miss not having my full set with me on the trip.  If I remember correctly, I took my driver, hybrid, 5, 7, and 9-irons, a couple of wedges, and putter.  I was all set.
All of this has gotten me thinking about two smaller golf bags (MacKenzie, maybe?) with half sets might be our best travel option going forward.  Instead of playing out of a single overstuffed bag, we'll both have smaller, lighter, and easier to carry individual bags.

Like fly fishing, golf has it's own set of gear musings to keep it interesting.
Posted by Cameron Mortenson at 6:00 AM